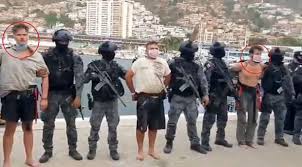 Denmnan and Berry tried to force their way into Venezuela along with 50 other citizens of the Caribbean country to overthrow President Nicolas Maduro’s government.

These crimes appear in Venezuela’s Penal Code, and for them, the mercenaries were sentenced to 20 years in prison.

“The former U.S. soldiers, who admitted their responsibility in the events, were accused by the prosecutors in the case of serious crimes,” Saab explained.

The U.S. Silvercorp employees, former members of the U.S. Army Green Beret Special Forces, were detained in the second attempt of an attack against the Venezuelan coast.

At least eight people died and half a hundred more were arrested during the search and capture of the mercenaries.

Last May, Venezuela’s justice system ordered preventive detention for 40 people due to their involvement in the failed invasion attempt.