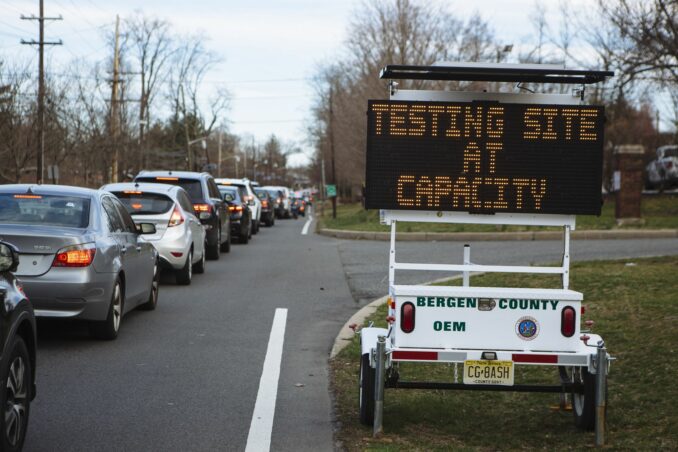 Drive-through COVID-19 testing in Bergen County, N.J. These tests were a “partnership” of state government with Quest Diagnostics and Walmart stores hosting the sites.

In the midst of a capitalist crash and an out-of-control health crisis, two mega-industries that bear a heavy burden of responsibility for the health disaster are reporting soaring profits. “The nation’s leading health insurers are experiencing an embarrassment of profits,” reported the New York Times Aug. 6. “Anthem, Humana and United Health Group second quarter earnings are double what they were a year ago.”

The profits of medical insurance companies are supposed to be capped and rebates provided to those paying health premiums. But it turns out no rebates are planned.

Testing for the coronavirus has become another profitable disaster. Shares in the two major COVID-19 testing companies — Quest Diagnostics and Laboratory Corporation of America — are soaring.

The fact that it can take two weeks and even longer for COVID-19 test results, and that results are not coordinated nationally, makes tracking irrelevant. Nevertheless, it is very lucrative. Quest will earn $1 billion this year — over 10% more than they estimated 6 months ago. As Quest Chief Financial Officer Mark Guinan explained, detecting COVID-19 brings “good margins.” (“How U.S. made Covid-19 tests a profitable disaster,” Reuters, July 23)

Every enterprise in a capitalist system exists to make a profit. If it doesn’t make a profit, it has no purpose. A company that makes profits, especially in the midst of a capitalist crash, is considered a healthy investment — even if it is costing tens of thousands of lives.

Medical insurance conglomerates are profitable — even if millions are left uninsured and don’t get to see a doctor because co-payments are too high. Some 41% of the population can’t afford to visit an emergency room.

Big Pharma, the largest drug companies, are enormously profitable. So drugs, rather than health programs, are promoted for every possible condition.

Mergers of hundreds of hospitals into giant conglomerates are profitable, even if medical staff are laid off, advance orders of essential personal protective and other equipment are short-listed, and thousands of hospital beds are lost. Because of this, the U.S. has fewer hospital beds per person than 80% of the world’s nations and closes hospitals faster.

Profits first at labs, too

Quest and Lab Corp are profitable precisely because these giant lab corporations are unwilling to invest in equipment and labs they might not need six months from now.

Since insurers will pay even when tests are so late as to be useless, this gives big labs an incentive to keep piling up the tests as long as share prices keep rising, regardless of how long patients and doctors are kept waiting for the results. Even though other, much faster tests are easily available in the U.S. and around the world, these two lab conglomerates have contracts locked in with the big hospital and insurance corporations for almost all lab tests.

Hospitals can most profitably use the interconnected software of the big corporate labs. In the pressure to maximize income, both for-profit and nonprofit institutions consistently push for greater privatization and the elimination of competitors.

Because U.S. health care operates on an uncoordinated, for-profit basis, it is one of the most expensive and unequal systems in the world. Of the more than $3.5 trillion that the U.S. population spends annually on health care, a meager 2.5% goes to public health. (“COVID-19 and Underinvestment in the Public Health Infrastructure of the United States,” Milbank Quarterly, June 2020)

Public health is just not profitable. Despite its importance, U.S. expenditures on public health have steadily been cut at all levels, especially since the 2008 capitalist crash. Local health departments have lost more than 55,000 staff members.

A hiring freeze at the Centers for Disease Control and Prevention has left hundreds of positions unfilled. Meanwhile, the top positions are full of political appointees connected to biotech, pharmaceutical and insurance companies.

Public health funding for preparedness and disease surveillance has been on a downward trend for decades. The CDC budget was cut another 17% in 2018.

Now the CDC issues only vague guidelines and recommendations, and its advice is watered-down or worthless. It took three months into the pandemic for it to even recommend that people wear masks.

Health care in the U.S. is a patchwork that is unraveling.  The lack of coordination and planning leaves millions without medical care in the best of times. Now, during the COVID-10 epidemic, it has created an uncontrolled medical crisis that is a global threat.

Countries around the world are closing their doors to travelers from the U.S. because conditions here are so out of control.

The United States is a technologically and scientifically advanced, modern, industrial society. But the overwhelming majority of the people are without basic health protection. Why does this glaring contradiction exist?

But it does have pre-existing infrastructures that make it incapable of dealing with health, social or environmental crises.

A majority of the federal budget’s discretionary spending goes to the largest, most sophisticated and expensive military infrastructure in world history — over 5,000 military bases, more than 800 of them around the world, plus 13,000 military aircraft and 500 ships. There are huge multibillion-dollar stockpiles of weapons of mass destruction, nuclear and conventional. There are 1.3 million active duty personnel, 600,000 military contractors and a well-coordinated chain of command.

The U.S. also has the largest, most repressive and racist prison infrastructure in the world: more than 2 million incarcerated, overwhelmingly people of color. And it has the largest police force in the world by far: 800,000 cops. There are 17,985 U.S. police agencies.

The police infrastructure is so highly coordinated that an electronic fingerprint test takes 15 seconds to get results, through automated fingerprint identification connected to police agencies all over the country. This database is part of the repressive national infrastructure. It functions very well.

Compare that to the two weeks on average to get the results of a COVID-19 test, where results nationally are totally uncoordinated.

Under capitalism, an economic crash occurs every 7 to 10 years. This has been true for three centuries. It is expected, predictable, unavoidable and devastating for millions of people. But it always leads to greater concentrations of capital and wealth.

The huge military machine and the giant repressive prison and police apparatus serve an essential role. They exist to hold this global capitalist empire together and to ensure the ability of a tiny handful of capitalist owners and major shareholders to make superprofits.

The tremendous cost of an infrastructure for military and police repression, alongside the lack of any health care infrastructure, becomes more dangerous with every passing day.