To Wall Street, only the great reserves of Bolivian lithium matter. 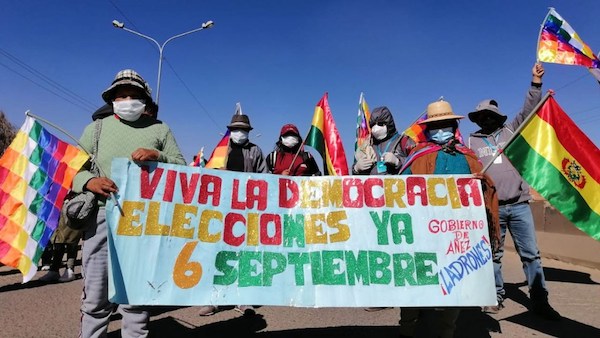 Once again, a scenario of multiple crises that began with the November coup defines Bolivia’s future. De facto President Jeanine Áñez’s main achievement was to unleash a shameless wave of racist repression against Morales’ Movement for Socialism (MAS) and the Aymara and Quechua Indigenous peoples.

Áñez kept none of the promises she made to pacify the people after the November coup, nor did she offer any assistance to the poor during the twin crises of COVID-19 and the ensuing economic collapse.

First there were a series of election postponements. The Supreme Election Tribunal’s (TSE) ultimate unilateral reset of the presidential election to Oct. 18 was the final straw for the masses. Their Aug. 3 general strike with at least 75 roadblocks shut all the country’s major highways.

“The general strike and roadblocks were decided upon at a town hall meeting held in the city of El Alto, La Paz, on July 28 where social organizations from the nine departments of the country gathered for a massive protest march. The social movements reject the postponement of the election until Oct. 18 as announced by TSE President Salvador Romero.” (resumen-english.org, Aug. 3)

MAS candidate for president, Lucho Arce, said in a radio interview, “Neither the MAS, nor Evo Morales nor I are behind the mobilizations against the illegalities of the TSE. Bolivia is mobilizing itself.” He said that shrinking family resources due to massive unemployment and wage cuts forced the action by the Central Labor Council of Bolivian Workers (COB) and the Unity Pact, which includes social organizations, among them Indigenous bodies, that lead resistance to the coup government.

“It is not MAS that is mobilized, but the people who have grown tired of the arbitrariness and looting of a government whose only task was to call for elections,” said Arce.  (kawsachuncoca.com, July 25)

The unwillingness or inability of the government to communicate without threats, arrests and violence continued unabated on Monday, Aug. 10, after the COB and Unity Pact negotiated unsuccessfully with the TSE and the Plurinational Legislative Assembly on Saturday night until dawn on Sunday morning, Aug. 9.

Bolivia has arrived at a moment of truth. Many believe the hated Áñez will stop at nothing to hold onto power. TeleSUR English reported that two U.S. war planes were delivered to the government.

Government ministers are making ominous threats. Motorcycle gangs of fascists, supported by the police and the army, are raiding some roadblocks around Cochabamba much as they terrorized urban Indigenous people last November. This all fits with the government that engineered a savage regime change and massacred Indigenous people who protested the coup.

Will Morales’ overthrown MAS party return to power through elections, or will some other outcome erupt through a bloody struggle in the streets? Only time will tell.

Evo Morales tweeted: “De facto government and right-wing press discredit legitimate mobilizations of the Indigenous movement and social organizations. The peoples that fight for peace and social justice are called terrorists, savages and they tell us that we are violent; it is the North American doctrine.” @evoespueblo

On Friday, Aug. 7, the Inter-American Commission on Human Rights called on the de facto interim president to promote dialogue with all the protagonists in the struggle. Áñez promptly invited key players to a televised dialogue that took place at 9 a.m. on Aug. 9. The U.N., the Catholic Church, The European Union, the Minister of Defense and the Minister of Government, Añez, representatives of two political parties (ADN and PAN-Bol) and a representative of the heavy transport industry attended.

One participant humiliated Áñez by sarcastically pointing to key empty seats. Not attending were representatives from the Plurinational Legislative Assembly, the Central Labor Council of Bolivian Workers, the Unity Pact, MAS and four other invited parties.

Áñez’s “dialogue” was doomed because, as mentioned above, an emergency meeting between Salvador Romero of the TSE, the Plurinational Legislative Assembly, the COB and the Unity Pact that lasted until sunrise on Sunday morning ended in failure.

In recent days, the COB exhorted demonstrators to allow passage of oxygen and medical supplies so as not to interfere with the national hospitals in their fight against COVID-19. The government and the media have lied, saying that strikers are blocking vital supplies and emergency vehicles.

In the meantime Bolivia’s coronavirus cases are soaring, with thousands of uncounted deaths due to the lack of testing. Nine out of 10 families have lost income due to the collapse of the economy under Áñez’s incompetent management.

On the ground, militants who remember the massacres and the broken promises, whose families are hungry due to the crises, want more than an election. According to Resumen, “[T]he cooperatives of miners are saying: ‘We will not back down one millimetre in our struggle for Áñez to resign.’”

One of their leaders said that they are going to continue with the struggle and that “the dictator Áñez must resign.” He warned the military and police: “[E]ither join us or suffer the consequences. There are millions of us throughout the country.”  (Resumen Latinoamericano, Aug. 9)