On July 7 the Boston School Bus Drivers Union, United Steelworkers Local 8751, passed “Resolution in solidarity with the righteous rebellion against racism, police brutality and white supremacy.” Included was a demand to “Expel all so-called ‘police unions’ from the AFL-CIO!” 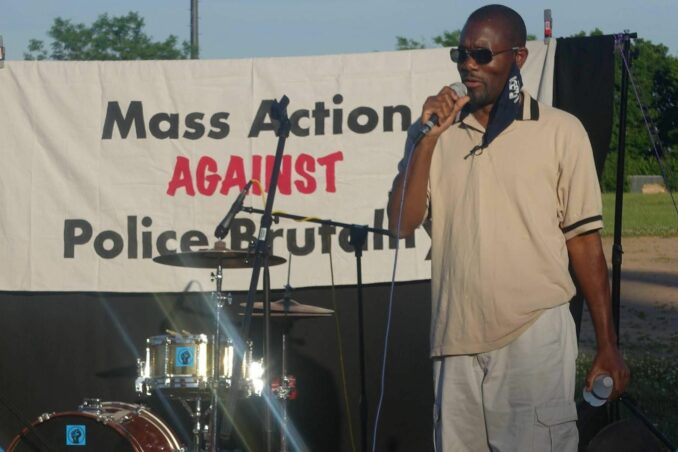 This resolution is one of many initiatives to kick cop associations and cop units of major unions out of the labor movement. Police, sheriffs, prison guards and agents of Immigration and Customs Enforcement and Customs and Border Patrol (ICE/CBP) currently belong to various unions, including American Federation of Government Employees (AFGE), American Federation of State, County and Municipal Employees (AFSCME), Service Employees )SEIU), Communication Workers (CWA) and the United Auto Workers (UAW).

Labor organizations that have passed resolutions for police expulsion include the Writers Guild of America, East (WGAEast) and Seattle-based MLK Labor Council. SEIU activists have brought the issue to their union via #SEIUDropTheCops.

The California Labor Federation did not vote to expel cops from the labor movement, but its pledge to “expel from this body any member or affiliate who is a member of any Fascist or White Supremacist organization or member or affiliate who pursues policies and/or activities directed toward the purposes of any Fascist or otherwise White Supremacist Ideology”could be used for that purpose.In any case it opens up the conversation at the statewide level. The federation passed four anti-racist/anti-police brutality resolutions and stated it “will push for and support efforts to ensure economic justice and equity for Black, Brown, and Indigenous communities, including but not limited to defunding local police departments to redirect funds to social services and education.”

Here is the USW Local 8751 resolution.

Black lives matter! Justice for George Floyd and all victims! Reopen the cases!

Defund/abolish the police! Community control of safety and health, now!

Expel all so-called “police unions” from the AFL-CIO!

Whereas, For many weeks a tidal wave of youth-led righteous rebellion has flooded cities and towns across the country and around the globe protesting the brutal police murder of George Floyd and other Black, Brown and Indigenous victims of the long, cruel, vicious history of racist violence, police and fascist lynchings, and

Whereas, systemic, institutional racism victimizes the families and Black, Brown and Indigenous communities again by failing to bring the racist perpetrators to justice. The peoples’ Movement for Black Lives, the largest in the history of the country, is proclaiming in many languages but one voice “enough is enough!”  “Reopen the cases!” White supremacist institutions from the White House to the State House, to City Hall, to the Court House, to the playhouse, to the schoolhouse must be abolished now!, and

Whereas, The cruel and calculated police murder of George Floyd provided the spark that lit the powder keg, this rebellion is addressing historic and current white supremacy in all forms and of the most broad and comprehensive character, framing the national and international dialog and winning important concessions.  Racist, reactionary, pro-slavery, and pro-colonial monuments from Confederate soldiers to Columbus are tumbling down; Jim Crow-era product marketing symbols are being trashed; all variety of degrading and demeaning stereotypes are being challenged. Entertainers and sports figures across the spectrum are making their protest heard and are now following in the vanguard footsteps of Colin Kaepernick, NFL quarterback who four years ago took a knee to protest police brutality and systematic racism, and

Whereas, The current, deadly COVID-19 pandemic, as with all past health crises in this for-profit, capitalist healthcare system, is disproportionately impacting and killing Black, Brown and Indigenous communities, and

Whereas, Labor leadership and rank and file have – like Local 26 UNITE HERE’s splendid defense of its members against racist police arrest and brutalization of its Black members in Lynn, MA — and must continue to “walk the talk” in this critical fight, and

Whereas, USW Local 8751 has a proud history of demonstrating our “Solidarity in action” in the struggle against racism since our founding in the 1970s. Our members helped to organize the historic Dec. 14, 1974, 25,000-strong “Boston March Against Racism” and have brought our union voices, resources, sound systems, banners and bodies to countless rallies, picket lines, marches from those days to the present. We marched for Justice for Amadou Diallo, Eric Garner, Michael Brown, Philando Castile, Sandra Bland, Usaamah Rahim, Terrence Coleman, Breonna Taylor, and countless Black, Brown, Indigenous, migrant and LGBTQ2S+ victims of homicide by police, ICE agents and prison guards, and

Whereas, The very foundation of unionism is solidarity and unity, and the very duty of union leaders is to fight against racism and all forms of oppression. The role of the police – from their “Pilgrim militia,” “fugitive slave catching” and “prison to plantation” formations only a few generations ago to their vicious attacks on the Civil Rights Movement, the Black Panther Party, the Young Lords, and American Indian Movement, to their anti-union “Pinkerton”-style strike breaking — has been used as the bosses’ club against worker solidarity and unity.

Likewise, the police have shown themselves to be the sworn enemy of peoples’ movements — women, LGBTQ2S+, im/migrant rights, disability rights, etc. Their shameful, vicious and brutal attacks and frame-up arrests of the current wave of Black Lives Matter demonstrators continue this vile tradition. In every one of Local 8751’s eleven strikes throughout our history, we have learned the bitter lesson that we not only must fight against the corporations but also against their police. These bodies of armed troops only serve the interest of the bosses, brutalizing and intimidating our picket lines and subjecting our leaders and ranks to lockouts and false arrests on frame-up charges.

Be It Therefore Resolved that Local 8751 dedicate our active solidarity to this righteous rebellion and call on others within the labor movement to join the struggle and give aid and resources to the building of this historic movement and support for its demands, and

Be It Further Resolved that Local 8751 give to brother Kaepernick’s National Know Your Rights Legal Defense Fund and the defense of local protesters falsely arrested during demonstrations following George Floyd’s murder;  And that we give resources to local leadership of these protests in all of their glorious expressions, including to Black Lives Matter Boston, @BlackBoston2020, Mass Action Against Police Brutality, United American Indians of New England, FIRE Boston, National TPS Alliance and its affiliates, the Greater Boston Marxist Association’s “Health & Safety Kit” mutual aid campaign, For the People (#FTPBoston), Community For Us, By Us Collective, etc., and assist with sound, trucks, media and other logistics as needed, and

Be It Further Resolved that USW Local 8751 join the Martin Luther King Labor Council of King County, Washington, Writers Guild of America, East, and other unions and tens of millions of workers, organized and as yet unorganized, and call on the Greater Boston Labor Council, Massachusetts AFL-CIO and the National AFL-CIO to immediately expel the International Union [sic] of Police Associations and all other organizations of police, ICE agents and prison guards from its membership ranks. We further call on all unions with units representing police, ICE/CBP agents and prison guards to expeditiously disaffiliate those units, and

Be It Further Resolved that, USW Local 8751 call on Mayor Walsh and the Boston City Council to defund the Boston Police Department, to enforce the demand and mandate of the citizens of a Sanctuary City and refuse to cooperate with ICE, and to reallocate those substantial hundreds of millions of taxpayer monies to social services, including the Boston Public Schools and other youth-targeted and -directed educational, healthcare, jobs and housing programs, and rights.