By Alyssa Faith and Summer Autumn

School districts across Utah are planning to open with in-person classes for the start of the new school year, despite the state having twice the number of confirmed cases of coronavirus as they did when schools closed in March. Governor Gary Hubert requested school districts open for in-person learning, while leaving planning and procedures up to individual school districts. School boards have been making minimal changes without input from teachers, school employees and parents. 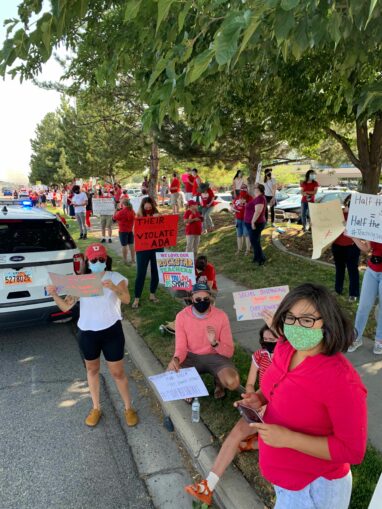 The Granite Education Association, representing teachers in Utah’s largest school district, held a rally outside the district offices during a school board meeting on Aug. 4. The rally was attended by approximately 600 workers. They demanded the school board listen to workers and do more to keep employees and children safe.

They also expressed concern over the district’s plan to offer both in-person and virtual learning, with no plan to hire more teachers — effectively doubling teachers’ workload without compensation or support. Workers who have expressed concern about returning during the pandemic, either due to being high-risk or having high-risk loved ones at home, have been offered no alternatives other than to resign, retire or take Family and Medical Leave Act unpaid time off.

Members of the union are debating striking if an education plan that does not involve face-to-face in-person education is not implemented. It would be the first Utah educators’ strike in three decades.

Utah is an anti-union “right-to-work” (for less) state. Many workers are hesitant or unsure about how to speak out, in fear of losing their jobs. Utah has the lowest rate of educational funding per child in the country. The lack of funding has led employees to doubt the district’s ability to provide proper personal protective equipment and cleaning materials.

Teachers have expressed concerns and doubts about the practicality of expecting younger students to maintain social distancing in schools and classrooms not spacious enough to accommodate social distancing with large class sizes.

Opening schools to force parents back to work

Recent comments from Dr. Anthony Fauci, director of the National Institute of Allergy and Infectious Diseases, labeled the reopening of schools as an “experiment” to see how the virus would spread among children and workers in a school setting. This suggests the powers in charge are not opening schools due to a belief that it is safe to do so, but rather to use the schools as a means of child care in order to send parents back to work.

It is an abuse of the working class for the ruling class to force parents to risk their children’s lives in order to return to work for the capitalists. The affluent classes will have other options for safer child care or alternative incomes, while the majority of workers will have no choice but to send their children into unsafe schools in order to maintain income and housing — placing entire communities at risk of illness or death.

When school districts in Chicago announced a return to in-person schooling, the teacher’s union there held a meeting and announced an intent to strike, and the government announced the next day that schooling would take place entirely online. A strong union has the power to protect its workers’ rights and, in times such as now, perhaps the safety and lives of entire communities.

Teachers are fighting for the safety of the children in their communities. Act in solidarity with teachers and workers!