Since the pandemic began, Brazilians have suffered 93,000 deaths and 2.7 million infections — the second highest number of infections in the world after the United States. Far from marshaling his country’s resources to battle the disease, Bolsonaro has intentionally sabotaged Brazil’s COVID-19 response. Like his U.S. analog, the right-wing Bolsonaro has shown a brazen defiance of scientific data as well as basic common sense. He has repeatedly claimed that fears of the virus are overblown and often appears in public without a mask.

This is in spite of the fact that both Bolsonaro and his wife have contracted the disease. Parallels to the self-destructive foolishness of conservatives in the U.S. — exemplified by the recent death of Trump supporter Herman Cain — are striking. 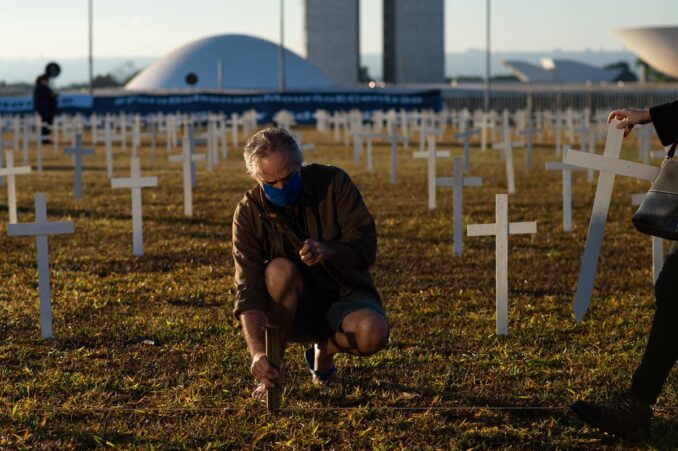 President Bolsonaro has allowed the coronavirus to decimate the economic lives of Brazil’s poorest residents. Unlike most world leaders, Bolsonaro vetoed a moratorium on evictions. In the city of São Paulo more than 2,500 families either face eviction or have lost their homes already. (Yahoo News, July 30) Favelas — communities of improvised housing consisting mostly of corrugated metal shacks — are expanding as more and more Brazilians are forced from their homes by ruthless landlords. The limited access to sanitation in these densely packed favelas only fuels the spread of the virus.

The economic and health impacts seen across Brazil have disproportionately affected Brazilians of African descent. Brazil has the largest Black population outside of Africa. As the descendants of slaves, Black people in Brazil have endured a long history of racist oppression. The COVID-19 crisis has perpetuated that oppression.

According to The Guardian, 34% of the Brazilian population lives without basic sanitation. Of that population, 66%  are nonwhite. In addition, 80% of Black Brazilians do not have health insurance. With limited access to sanitation and adequate medical facilities, Black people in Brazil are at an incredibly high risk of suffering from COVID-19. (June 9)

The numbers bear this out; in hospitals, 55% of Black and mixed-race patients die compared to 38% of white patients. Economic and class discrepancies only increase the disparity. A study showed that an illiterate Black COVID-19 patient was 4 times more likely to die than a white patient with a college degree.

Recognizing Brazil’s long history of stealing Indigenous land and murdering Indigenous people — either through direct violence or the spread of disease — the Brazilian legislature attempted to pass a package of laws responding to the health needs of the Indigenous population. Showing a shameless level of racism and  contempt for human life, Bolsonaro vetoed several key measures. He blocked the provision of emergency funds and clean water to Indigenous communities, along with distribution of disinfectants and ventilators and an increase in intensive care units and hospital beds. All of these are badly needed in Indigenous communities.

According to official counts, which may be artificially low due to limited testing, more than 8,000 Indigenous people have contracted the coronavirus in Brazil. Their death rate is 9.1% in contrast to 5.2% of people in the general population. (National Geographic, June 2020)

The continued encroachment onto Indigenous land by loggers, gold prospectors and miners is a long-standing disease vector. Since he took office, President Bosolnaro has prioritized dismantling regulations limiting capitalist land incursions. It is feared that the weakened monitoring of Indigenous borders will lead to more land theft — and more deaths.

However, Indigenous people have suffered from the spread of disease by Europeans for centuries. When the pandemic began, Indigenous communities responded quickly. Many territories have set up roadblocks, encouraged community members to isolate, and begun sewing and distributing masks.

The longstanding contradictions within Brazil with regard to race, Indigenous sovereignty and class have been sharpened by the COVID-19 crisis and Jair Bolsonaro’s hateful right-wing policies. Bolsonaro’s cruelty is only the newest phase in a long history of racism and genocide.

But oppressed people are doing everything they can to resist. Community groups in Brazil’s favelas are organizing to provide aid; labor unions and social organizations are pushing for Bolsonaro’s removal from office; and Indigenous organizers have brought their fight for sovereignty to the international stage. It’s vital the working class and oppressed in the U.S. and around the world act in solidarity with their struggle.