The following slightly edited remarks were made by Kristen Turgeon from the Boston branch of Workers World Party on a July 30 webinar sponsored by WWP’s Disability Rights Caucus and titled “Smash Ableism, Racism, All Bigotry & Oppression!” 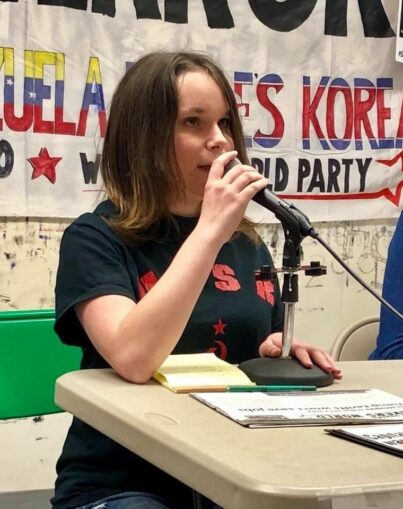 It has been 30 years since passage of the Americans with Disabilities Act.  I was born in 1996 so I grew up under it, and the word that comes first to mind when I think about the ADA is access.   I was lucky to have a wonderful advocacy team in school, but when I graduated and moved into the wider world, having experiences and talking to other disabled folks, I discovered how rare that is.   Like many disabled people I am unemployed.

The blind community alone faces a 75% unemployment rate.   Like many folks, especially during this time period, I receive government benefits.    It’s not enough to live on and a little too much to die.   It seems we have the right to accessibility, but not the access itself.   If you have more than $2,000 and are on Social Security, they can cut you off.

Yet things like accessible equipment, health care and paying for necessary services are expensive — not to mention rent, bills and food.  Many disabled folks are trapped in this cycle of being consistently poor, and if we want jobs, they are very hard to come by.  How are you supposed to get hired when whoever’s interviewing you judges that either you couldn’t do the work or that it would cost too much to hire you?

We aren’t even given the chance to sell our labor.  But why are we stuck in this trap? The answer is capitalism.  The system needs a reserve army of unemployed people so that when workers bring their complaints to the bosses, the bosses can say, there’s a bunch of people who would take those jobs.

Some things have been won.  Screen readers allow visually impaired folks like myself to access technology we wouldn’t have been able to use 5 years ago.    Buildings and train stations are slowly becoming accessible to everyone.   While these rights are very important, they are not enough.

But how did we win this small amount of accessibility? We struggled, marched and fought.  Real change only comes from below.  We can see this in the history of every movement from the struggle to end racism and police brutality to the fight for im/migrants, to the struggle of LGBTQ2S+ people.

The disability movement is tied to all other movements because we are part of the global working class.  This system was not designed for any of us.  We, as workers across all struggles, must unite to take down capitalism.  We sell our labor to the bourgeoisie; therefore we have the power.   This pandemic has exposed the ugly face of capitalism and its clear profit-over-people motives.   More people worldwide are realizing that the only future is a socialist one.

If all us workers organize, take our labor back from the bosses, we can create a society in which everyone has equal access to food, housing, health care, a job and education.   That’s what all of our struggles are about.   As it says in the labor song, “Solidarity Forever”: “We will bring to birth a new world from the ashes of the old.   For the union makes us strong!”

We will unite in solidarity and struggle for a world where people and the planet are considered over profit and corporate greed.  Workers and oppressed of the world unite!