The top attorney in the country, the person who is supposed to uphold the law the most, is also the most crooked and dangerous.

Not to mention that he is an utter white supremacist who wouldn’t mind at all if the country went fascist.

Even his own colleagues, other lawyers who operate daily in an unjust justice system to begin with, charge U.S. Attorney General William Barr with “a pattern of alleged ethical violations … in the last two years” alone. (Bloomberg Law, July 24)

So it was no surprise to anyone when on July 22, Attorney General William Barr stated that the responses to the murder of George Floyd are “extreme reactions that have demonized police.” (CNN, July 23)

As a result, he went on, there has been “a significant increase in violent crime in many cities.”

This statement was made at the very moment that federal and Immigration Customs Enforcement agents, under Barr’s leadership, are beating, gassing and arresting protesters in Portland, Ore., in actions that are reminiscent of Nazi Germany or fascist Chile. Activists who are determined to honor the name of George Floyd while others are being brutally pulled off the streets and into unmarked cars. 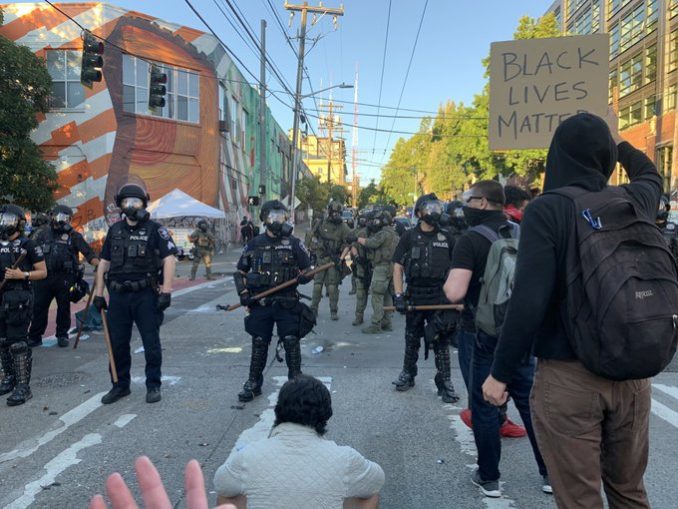 Stand off with federal troops in Seattle on July 25.

Barr’s statement was made at the same time that he and Trump promised to send these very same storm troopers to other urban areas under the direction of only the federal government. This is a far departure from what exists now, where local governments have more say.

Why did Barr say this now, over two months since Brother Floyd was killed?

Barr and the cabal in the White House are sending messages to the right wing, and especially the cops, that they are determined to continue carrying out their war against the workers and the oppressed. Furthermore, they are setting up a situation where Barr and Trump alone dictate the actions of the federal stormtroopers.

The fact that the protests that erupted after the heinous murders of George Floyd, Breonna Taylor and countless others have not ebbed has the ruling capitalist class not only worried but frightened.

The perfect storm of ongoing police terror against people of color and an economic crisis aggravated by a cruel health pandemic have resulted in not only disillusionment with the capitalist system, but anger that is not likely to cool down.

Barr’s comments were made at a White House press conference where the Trump administration announced that the government will be launching a “federal law enforcement surge” to urban areas. (Justice Department, July 8)

The program is called “Operation Legend,” cynically and mockingly named after four-year-old LeGend Taliferro, a child killed while asleep in Kansas City, Mo., allegedly by an unknown drive-by shooter.

With “Operation Legend,” the Trump administration has sarcastically taken the actual war of racist police against people of color and turned it around to launch a program that will intensify that war.

The DOJ, instead of investigating and punishing police and vigilantes who terrorize the people, is launching a “surge” of those who carry out that terror.

Federal and ICE agents are terrorizing the people of Portland. Racists are killing protesters in Austin, Texas.

With Operation Legend, the Trump administration, including Barr, is not just sending a dog whistle, but an air raid siren calling on all white supremacists to continue these attacks against the movement.

The so-called violence that Barr and Trump refer to may or may not be real. It may be serious or not. But the solution to any antisocial actions in the communities of color and among the poor will not be resolved with Operation Legend. In fact, it will only aggravate them.  It will divert attention from the real problems of unemployment, lack of education and health care.

A “surge” of the very agents who killed George Floyd means further occupation of a terrorist force.

When the Trump administration announced the “surge” of police to Chicago, Mayor Lori Lightfoot said in a July 21 tweet: “Under no circumstances will I allow Donald Trump’s troops to come to Chicago and terrorize our residents.”

According to Channel 5 news in Chicago, Mayor Lightfoot stated: “In Portland (the feds) ignored the (local) U.S. Attorney, put these agents on the street and I don’t think anyone can quibble with the fact that what happened was not only unconstitutional, it was undemocratic.”  (July 22) The city of Chicago is launching a lawsuit against Troop to prevent federal troops from coming there.

The top attorney in this country is a white supremacist crook with no respect for democracy or the constitution, his own colleagues in the legal world have now stated.

But revolutionaries have always known that the legal system under capitalism has never represented the interests of the workers and the oppressed. When it is coming for the liberals, it’s time to worry about the encroachment of fascism in the U.S.