Workers World Party and other local activists delivered a letter of solidarity to Consul General Cai Wei at the Chinese Consulate in Houston on July 23. They demonstrated outside to oppose the Trump administration’s order that the consulate be vacated by July 24. The embassy served eight states across the southern U.S., providing assistance to Chinese citizens. 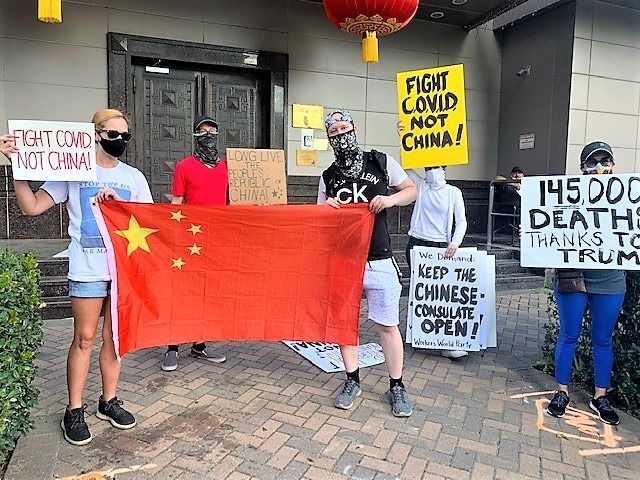 Granger explained that the U.S. is now the #1 weapons exporter in the world, sending death to nearly 100 countries; the #1 possessor of weapons of mass destruction, including a mind-boggling 6,200 nuclear warheads; and #1 in military budget at $1 trillion a year and counting.

The U.S. is also #1 for mass shootings, with nearly one-third of these massacres occurring in the U.S., and #1 in caging human beings. With only 4% of the Earth’s population, the U.S. holds 25% of the incarcerated population.

Now the U.S. is #1 in COVID-19 cases and deaths in the world. While China warned the world of the impending pandemic in early January and shared medical expertise to stem its spread, the U.S. continues to use the virus to try to scapegoat China.

Series of U.S. attacks on China 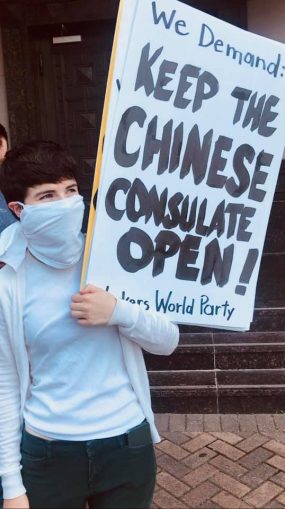 The  U.S. attack on China’s consulate is the most recent U.S. aggression. The capitalists running the U.S. make unsubstantiated claims about China to provoke economic war, while failing to meet the basic needs of people in the U.S. during the global pandemic.

After nearly 150,000 U.S. deaths due to COVID — and more deaths related to the capitalist crisis — it’s clear the ruling class cannot be relied upon to even keep alive the workers who generate their profits.

As Joshua Hanks noted in Workers World on May 26, “The U.S., with its highly developed economy, marshals massive resources for things like the Pentagon, Wall Street bailouts, mass incarceration of Black and Brown people, and extensive border controls. States like Kerala [in India] and countries such as Laos and Vietnam do not have economies that are as highly developed, yet what they do have, and what appears to be the key factor in containing the virus, are proactive, people-centered leftist governments and mass organizations that can mobilize millions of party members and the masses to achieve common goals for the public good.”

China, using similar strategies under the leadership of its Communist Party, has successfully contained the pandemic. In the U.S. deaths from the virus rise, and unemployment is skyrocketing. Corporations are bailed out, with most of the money voted “for relief” going to businesses and banks, but not to the people for necessities like food and shelter.

At the July 23 Houston rally, Workers World Party condemned the U.S. attacks on China, including on the consulate, and the U.S. lack of response to the pandemic. Prioritizing profits over people is a deadly response that puts the whole world at risk.

Workers World Party called on the Trump administration to reverse its order to China to vacate its consulate. Fight COVID-19, not China!

1. Free health care for all;
2. Nationalize the health care system under community control and build emergency hospitals;
3. Full pay, benefits and guaranteed income for all;
4. Food, housing, medical supplies and utilities including internet for all;
5. Suspend rent, evictions, mortgages, utility shutoffs and ALL debt;
6. Prioritize resources for communities of color, migrants, LGBTQ2S+ people, seniors, youth and people with disabilities;
7. Empty prisons and detention centers, shut down ICE and end racist attacks;
8.Community control — No cops — No military;
9. $2 trillion to the workers, not the banks; and
10. End U.S. wars, sanctions and environmental destruction.