Over 100 people, predominantly Mexican-American and young, marched in Philadelphia on July 12 to demand justice for Pfc. Vanessa Guillén. The protest was organized by JUNTOS and Lazos America Unida. 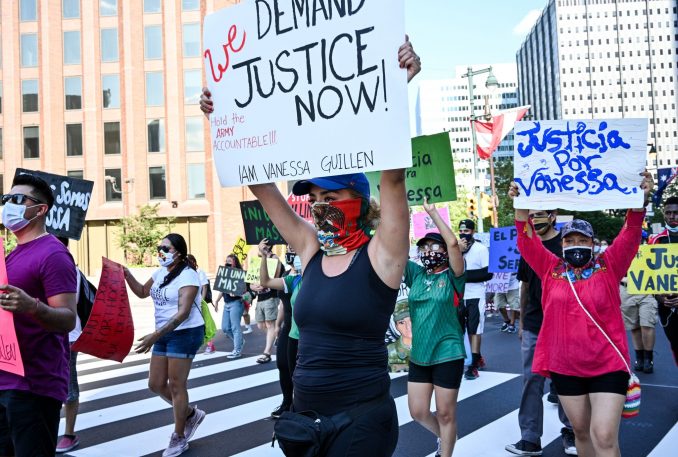 Participants carried “Justicia por Vanessa” signs and large photos of the young soldier who was stationed at Fort Hood, Texas. She disappeared after telling friends and family she was being sexually harassed and threatened within the military system. Speakers demanded justice from the higher-ups commanding the Army.

Guillén disappeared in April, evidently killed at that time, but her body was not found on the Fort Hood installation until June 30. The remains of another soldier, Pvt. Gregory Wedel-Morales, were also found there in late June. Both the Guillén and Wedel-Morales families charge Army and local officials with not searching for their missing loved ones with urgency and empathy.

Protesters also carried Black Lives Matter signs, photos of Dominique “Rem’mie” Fells — a transwoman brutally murdered in Philadelphia on June 8 — and photos of Breonna Taylor, killed by police in Louisville, Ky., on March 13 when they invaded her home without a warrant. As in Texas, Kentucky officials delayed waging a serious investigation until family and community pressure forced them to do so.

As the march passed by a large encampment of houseless people, speakers stopped to express solidarity with the Black Lives Matter movement and those struggling to obtain decent housing, especially during the current pandemic.