The commentary below, “LeBron James’ apology & the roots of anti-Semitism” first appeared Dec. 29, 2018, on workers.org.  Its reprint is a response to recent events, including the Instagram posting by DeSean Jackson — National Football League player with the Philadelphia Eagles — of a series of anti-Semitic comments during the first weekend in July. 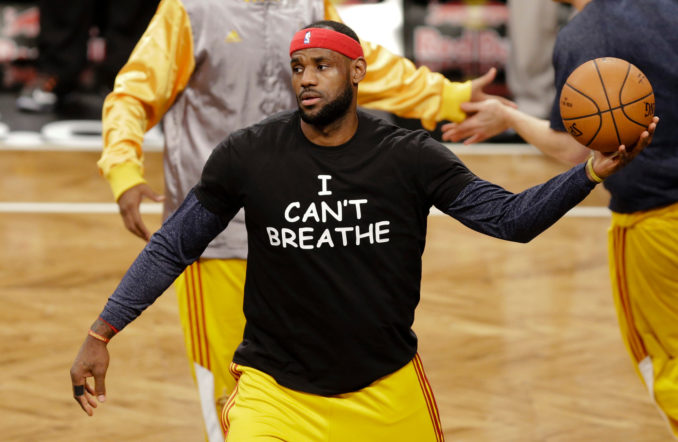 Jackson has since removed the posts, apologized and accepted an invitation to visit the Auschwitz-Birkenau concentration camp museum. Entertainer Nick Cannon also made anti-Semitic remarks on a May 2019 podcast, publicly broadcast on June 30.  He apologized to the Jewish community, but one of his TV shows was terminated by ViacomCBS. Both Jackson and Cannon are African American.

Ettinger’s article helps answer the question of why Black celebrities and athletes are held to a higher standard on this issue, while the ruling class and its puppet politicians are let off the hook. For example, Trump called neo-Nazis in Charlottesville, Va., “very fine people” in August 2017.  Actor Mel Gibson, a vocal anti-Semite, gets to sit in the front row at the Academy Awards.  This double standard is an all-too-familiar, divide-and-conquer tactic, always pulled out at the exact moment when the Black struggle — as today in the form of Black Lives Matter — is on the upsurge. — Monica Moorehead

A beloved athlete posts a brief song lyric on social media. Commentators denounce the lyric as offensive and him as a bigot. He says he didn’t know it was offensive, and apologizes. What does it all signify?

It signifies that it is in the interests of the capitalist ruling class to foment division and to blame the oppressed as somehow the real perpetrators of bias and bigotry.

The athlete is Los Angeles Lakers basketball megastar LeBron James. The lyric, which he posted to Instagram Dec. 22, included the phrase “Jewish money” from a rap song by the performer 21 Savage he’d been listening to.

Sports Business Daily is owned by Advance Publications Inc., a media conglomerate with vast holdings. These include Conde Nast, which publishes Vogue and Vanity Fair among other magazines; Fairchild Publications, which owns Women’s Wear Daily and other publications; and American City Business Journals, the biggest publisher of metropolitan business newsweeklies in the United States.

SBD is, in other words, a major capitalist media outlet. It posted $2.2 billion in revenues in 2017. Rovell, formerly of the worldwide sports conglomerate ESPN, the Entertainment and Sports Programming Network, is one of its best-known commentators and a right-winger.

In fact, the headline of Newsweek magazine’s Dec. 23 article on this “controversy” characterized James’ Twitter post as “angering conservative critics.”

So a reactionary writer for a website devoted to the profitability of professional sports tries to stir up hostility toward one of the country’s most prominent and progressive Black athletes for an unintended and immediately retracted reference. Although the attempt ultimately fizzled, and did not draw in Commissioner Silver, it did gather some support, mostly on Twitter, where dozens of tweets called James anti-Semitic.

The day after his tweet, LeBron James said on ESPN: “Apologies, for sure, if I offended anyone. … I actually thought it was a compliment, and obviously it wasn’t through the lens of a lot of people. My apologies. It definitely was not the intent, obviously, to hurt anybody.” (Dec. 22, 2018)

It seems clear, it rings true, that James honestly didn’t know the historical meaning and use of phrases like “Jewish money” as fodder for anti-Semitism.  He apologized anyway. What more could he do?

Also on a Dec. 22 episode of his HBO series, “The Shop,” James criticized the majority of white National Football League billionaire owners for having a “slave mentality” by disregarding the rights of their players, 70 percent of whom are Black. (espn.com, Dec. 22, 2018)  James made no apology for this accurate statement.

The issue, in reality, is never what the person did or didn’t say, or how perfectly phrased the person’s apology was. The issue is that it is in the ruling class’s interest to deflect attention from the real source of anti-Semitism: itself.

Anti-Semitism is a very old, very effective strategy to direct the working class’s rage away from the true source of its problems: the ruling class, which is overwhelmingly made up of white, Anglo-Saxon Protestants. It instead portrays Jewish people, a tiny group — only 0.2 percent of the world’s population — as somehow owning and controlling the world’s wealth by being devious, evil schemers bent on driving workers and the poor into poverty and misery.

While its roots are deep and wide and go back millennia, anti-Semitism flourished during the rise of capitalism in Europe. From 19th-century czarism in Russia through the Nazi genocide, it was skillfully crafted as a tactic to break up revolutionary movements. To this day, with resurgent fascist organizing again casting caricatured Jewish bankers as the culprit behind workers’ worsening standard of living in Germany, France and other countries, the capitalists wield anti-Semitism as a favored tool.

In this context, the absurdity of portraying oppressed communities as purveyors of anti-Semitism should be clear. Who has the motive and the power to foment attacks against Jewish people? Who poses an actual threat to Jewish people?

The threat is real, as evidenced by the Oct. 27 massacre at a synagogue in Pittsburgh. Emboldened under Trump, previously suppressed elements, the worst violent, anti-Semitic scum, are surfacing and acting in a way that has not been seen in this country for decades. At the same time, racist attacks, already epidemic, are on the rise, whether against Latinx migrants, Black youth or other oppressed people.

The only effective response is unity, first and foremost against racism, and against all forms of bias and division, from anti-Semitism to sexism to LGBTQ2S+ oppression. It’s this unity, rejecting the bosses’ attempts to divert anger away from themselves, that will move the struggle of the workers and oppressed forward against capitalism itself