The Professional Staff Congress, the American Federation of Teachers union  representing 30,000 faculty and staff at the City University of New York, held four simultaneous car and bike caravans July 18, plus a Zoom meeting with nearly 700 participants. The caravans took place in Brooklyn, the Bronx, Queens and Staten Island, directed at CUNY facilities in those boroughs. 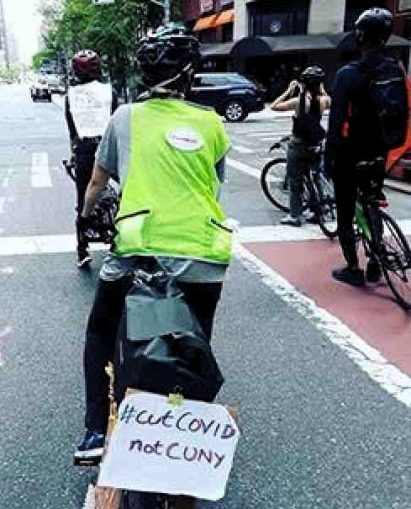 The demonstrations protested against the recent layoffs of 2,900 adjunct employees, who also lost health care coverage. Potential state cuts to CUNY funding and the possibility of a “dangerous, premature return to in-person instruction” were also raised.

“The members of the PSC refuse to normalize cuts and layoffs at CUNY. And we will not allow the University administration to put the lives of our members and students at risk by returning to campus before it is safe,” said Barbara Bowen, president of the PSC. “That’s why we’re demonstrating in the communities where our students live.”

The PSC is also projecting another, more militant event at the end of August shortly before the fall semester starts.