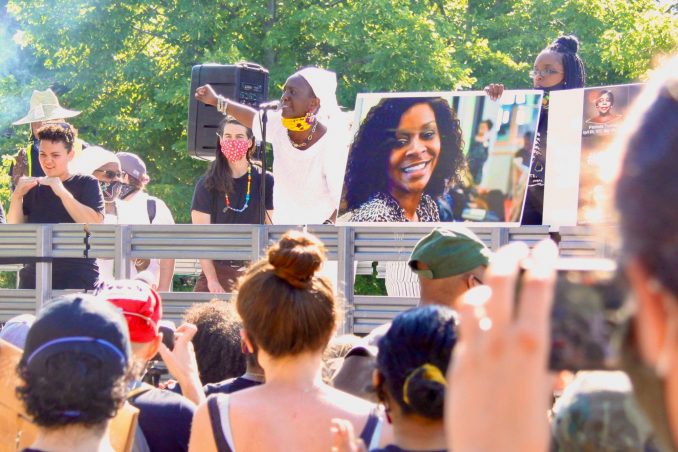 Activist and civil rights lawyer Kimberlé Crenshaw, best known for originating the concept of intersectionality — that “race,” class and gender social categories create interrelated and deeper experiences of discrimination, especially for Black women — envisioned the #SayHerName campaign in 2014 to ensure that their stories are not ignored.

While some names like Sandra Bland and Breonna Taylor have received increasing attention, on par with some of the Black men murdered by police, others like Michelle Cusseaux and Kayla Moore, both murdered by cops confronting them in mental health crises, remain lesser known. The killers of all four have, however, evaded justice. The “qualified immunity” recently upheld by the U.S. Supreme Court, that protects cops from accountability and consequences, is part of the longer list of privileges and abuses that have moved many from reformists to police abolitionists.

Community and labor solidarity was evident at the Boston action. Team Solidarity of the Boston School Bus Drivers, United Steelworkers Local 875 provided a 24-foot flatbed truck to carry the women leaders and performers from Nubian Square to the Boston Common. Demonstrating Black and Indigenous unity, Chief Sachem Wompimeequin Wampatuck of the Mattakeeset Tribe with the Massachusetts Indian Nation and North American Indian Center of Boston activists offered land acknowledgements and statements of solidarity.

Under attack from intersecting forms of institutional and interpersonal violence, Black women led the local marchers to the Boston Police Department headquarters in the heart of the Black community as they held the street to demand: “Abolish the Police!” As Griffiths Sekou said: “Black women are overlooked, erased, stigmatized and feared. . . . No matter what you do to us, we’re still gonna rise, and we’re gonna take other Black women with us. We’re gonna take everyone with us! This is the vision, the imagination and the new world that is on its way!” Griffiths Sekou also demanded that $40.1 million in the bloated BPD budget go to a community-controlled fund to uplift the health and safety of Black residents. 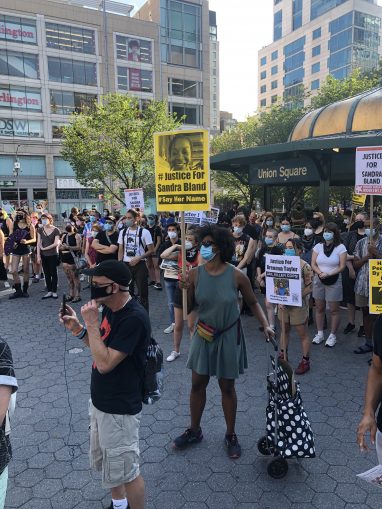 The 6th annual “#SayHerName – Sandra Bland” protest was organized by Peoples Power Assemblies/NYC in Union Square, July 13. Bland, a Black woman, was murdered while in custody in a Waller County Jail in Texas on July 13, 2015. (WW Photo: Toni Arenstein)

Speakers decried racist gentrification and attempted theft of the community’s Harriet Tubman House by greedy real estate developers, while standing in front of the endangered South End landmark. Its future — a thriving Black community center or death by condo conversion for high-income white residents? — currently hangs in the balance in Boston’s Suffolk Superior Court. Sistahs of the Calabash performed Wade in the Water, “a war cry,” in tribute to Harriet Tubman.

The Sistahs explained in a post accompanying the video of their performance: “Mama Moses called on the water divinities to guide our ancestors to freedom! An action at the Combahee River, planned and led by Harriet Tubman on June 2, 1863, in the Port Royal region of South Carolina, freed more than 750 slaves. This is the only military campaign in American history planned and led by a woman.”

Arriving at the Boston Common in the evening, the day “to lament those murdered, center and uplift all Black womxn” and share in radical joy ended in a moving cultural resistance program of dance, song, drumming, spoken word, speeches and food. There were trans and nonbinary people of color, mothers demanding justice for their children murdered by the BPD and young women dancers honoring the life of Breonna Taylor.

Quoting Audre Lorde, Yancey read, “It is better to speak remembering we were never meant to survive.” Yancey added, “We want to be righteously angry, and we want to be holding each other in love.”