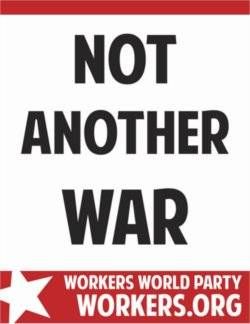 Israel set off a bomb on July 3 on the Iranian Natanz nuclear site, severely damaging a building integral to Iran’s nuclear power facility. The plan to attack the Iranian nuclear center had long been planned by the U.S. and Israel. (New York Times, July 10)

The unprovoked attack is one in a series of U.S.-backed bipartisan attacks targeting the Iranian people. Despite soft criticism from the Democrats about the Trump administration’s war crimes, the two major political parties in the U.S. have supported the use of force against Iran.

The Democrats’ main criticism of the Republican Party’s war crimes is that they lack a strategy and that Congress was not consulted. This criticism came after a U.S. airstrike killed Maj. Gen. Qassem Soleimani, a Iranian military official, in January. (vox.com, Jan. 3)  A few Democratic members of Congress objected to that missile attack,  including Reps. Rashida Tlaib and Ilhan Omar.

Despite a brief New York Times article on July 5, the Pentagon’s attack on Iran has been secondary news compared to the constant coverage about the coming presidential election. Corporate-backed candidates clearly take precedence over the lives of poor and working people in the U.S.

Israel’s recent attack is directly in line with U.S. foreign policy toward Iran and a continuation of Washington’s hostile actions against the sovereign country. The U.S. imposes horrific sanctions against Iran which are disastrous for its people.  Bombs fall on the Middle Eastern country with no consequences to Pentagon officials who order the air strikes or to those who carry them out.

Any defensive action that Iran takes when in the crosshairs of the imperialists is considered an act of “terrorism.” Yet the U.S. and its imperialist allies can bomb countries and wage wars as they are self-proclaimed “free and democratic” states.

While working people in the U.S. lose their jobs, health care and homes, and even die due to the COVID-19 pandemic, imperialist aggression abroad has not ceased.  It has actually increased, leading the U.S. in a familiar direction — to another war disguised as a “defensive action.” As always, when capitalists wage war, it is workers and oppressed people who suffer.

The state of Israel acts as an imperialist stronghold against forces in the Middle East whom the U.S. deems enemies. The justification for Israeli and U.S.  aggression is based on outright hypocrisy, to say the least. Washington and its allies can aim missiles and bombs at any country they choose to target. But if the countries defend themselves and fire back, that’s all the “justification” the U.S. needs to wage an invasion and all-out war.

The U.S. and their allies continually send a clear, simple threatening message to Iran:  “Stop existing and we’ll stop attacking.”