Vehemently defended and reinstalled after multiple direct actions, Columbus was finally carted away on June 10. A plan to remove the towering tribute to Northern white paternalism — showing Lincoln and a kneeling Black man in rags — was then announced on June 30. 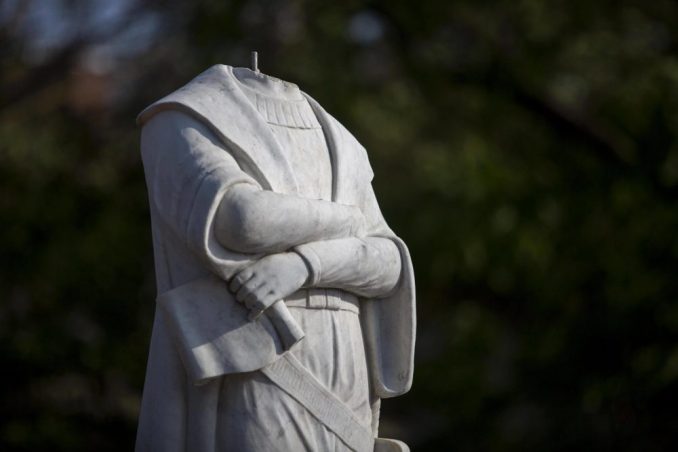 The now headless statue of Christopher Columbus in Columbus Waterfront Park in Boston.

Like most Confederate memorials that served to reinforce Jim Crow, these pieces say more about the moment they were unveiled than the history they allegedly depict. Their arbitrary origin stories challenge the narrative that they represent “history” and therefore should endure.

The Columbus statue appeared in 1979 on the initiative of people involved in the racist opposition to school desegregation in a nearly decade-long battle. A key figure behind the statue was Arthur Stivaletta, who even brought a Confederate flag to a racist 1976 “anti-busing” rally. (Boston Globe, March 1, 1976)

The arrival of the statue commemorating Columbus was never about “history,” but the goal of those who put it up was racist intimidation. It appeared just at the time non-white families had to show up in what they knew to be hostile neighborhoods.

Workers World Party member Ed Childs, one of the many WWP members actively involved in the defense of Black families from racist attack during the desegregation struggle, explained what happened then. WWP took a cue from the leadership of the Boston Indian Council — now called the North American Indian Center of Boston (NAICB) — and has been protesting the statue for the last four decades.

The 1979 ceremony gave the appearance of government backing or broad community support for the statue. What it really amounted to was giving a wealthy building contractor — one with a reactionary political agenda — an outsized imprint. Besides his open racism, Stivaletta’s main claims to fame were publicly burning the Vietnamese Liberation flag in 1969, along with the Iranian flag in 1979 and the Soviet flag in 1981 on Boston Common. He was reactionary on an international level.

The statue’s June beheading was the second for the unpopular and controversial 15th century adventurer. Following Indigenous leadership, even 21st century Italian-Americans have petitioned against the statue and for Indigenous People’s Day to replace Columbus Day. Some also propose that Sacco and Vanzetti —   Italian-American worker-anarchists persecuted and executed during the rabid anti-immigrant political climate in Massachusetts in 1927 — replace Columbus as the standard bearer of Italian heritage. These two workers better represent the working-class immigration story relevant to today’s descendants. BLM inspiration finally finished something many have long wanted to see.

In 1879, the “Freedmen’s Memorial” was supposedly the vision of emancipated Black slaves. Indeed, “African Americans, mostly soldiers, contributed the cash,” wrote Kirk Savage in “Standing Soldiers, Kneeling Slaves: Race, War, and Monument in Nineteenth-Century America,” but “white sponsors collected the money and decided how to spend it.” (page 92)

The stereotyped rendering of a “Freedman” has always bothered Tory Bullock, a local Black artist. “This man will never stand; he will always be on his knees,” he said in his viral video entitled “Boston, We Need to Talk [from] Your Black Friend.” He asked Black viewers, “Does that make you feel empowered … respected?” Bullock’s petition calling for removal collected almost 13,000 signatures before the announcement of its removal arrived days later.

Bullock also indicted the city in 2014 for uneven investment in historical preservation that had neglected the storied Strand Theatre in the heart of the Black community. This neglect exposes the hypocrisy of those who argue that the removal of racist monuments shows no appreciation for history.

In Boston, the median net worth of Black residents  — who when they were children riding buses to desegregate schools had stones thrown at them — was $8 as of 2015, according to “The Color of Wealth in Boston,” a study headed by the Federal Reserve Bank of Boston.  This fact sits in hypocritical tension with Boston’s liberal reputation.

But even in Boston there is a new people’s consensus to eliminate monuments that reinforce racism. Removing these objects is necessary and contributes to the reckoning with Northern racism that is also needed.