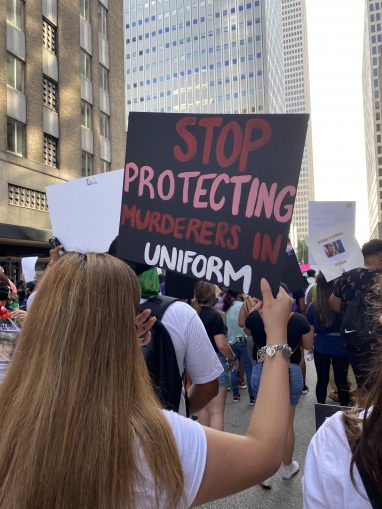 The case of Pfc. Vanessa Guillén has sparked a movement.

Since April 23, the family and friends of Guillén had been asking Army officials “Where is Vanessa?”

Pfc. Vanessa Guillén went missing on April 22 from Ft. Hood, Texas, the Army base she was assigned to, in Killeen about 60 miles from Austin.

On June 30, the family of Vanessa Guillén received an answer when the remains of her body were found at the Leon River, about 25 miles from the base.

Had Vanessa been a rich white man, the likelihood that higher-ups would have worked 24/7 — and mobilized all means at their disposal to find him — would have been 100 percent better.

But it took almost two months to get to the bottom of Vanessa’s disappearance.  And it took a huge effort by Vanessa’s family to get any attention at all from higher-ups.

From day one, Vanessa’s family solicited Army officials, went to the press, contacted celebrities, mobilized family and friends to find out why she was not returning their calls or contacting them.

They knew something was wrong. Vanessa had told her family that she was being sexually harassed by someone on the base, but had feared reporting that. On the day she went missing, she had decided to report the harassment.

News accounts state that she probably let her harasser know she would be reporting him the next day. Vanessa worked with her harasser and had to share difficult workspace with him every day.

Tragically, there seems no doubt her abuser took matters into his own hands and murdered her right then and there. He later killed himself as law officials moved in to arrest him after they found her body.

Guillén told her family she hesitated to go to her chain of command for fear that something worse would happen. This fear to report harassment runs rampant in the U.S. Armed Services. Why? Because there is an extreme culture of misogyny in the military.

The enormous institution of the U.S. military is not a benign force created to do good in the world. It is a repressive occupying force. Like the police who terrorize Black and Brown people here at home, its real purpose is to dominate, occupy and kill for the 1%.

According to The Nation, the annual U.S. defense budget exceeds $1 trillion. (May 2019)

What is this money for if not to occupy Afghanistan or bomb Yemen or Palestine? That money should be spent instead on COVID relief or to fund the broken health care system — not war abroad.

The military may be advertised as a place to get education or acquire skills to get a good paying job when you leave.  But in reality, it is a killing machine.

And its killers are trained to be desensitized to violence. We may never know the demons or the racism or the abuse Vanessa’s killer himself received in the Army to lead him to commit violence himself.

Since Vanessa’s disappearance, the hashtag #IAmVanessaGuillen has gone viral. Many female service members and veterans have shared their difficult stories about harassment and assault.

This is not news. On many occasions, dramatic stories have emerged about extreme sexism in the military. And due to the Me Too movement, women and their allies are pushing back like never before.

Vanessa’s life could have been saved. She did not have to die if serious efforts had been put in place long ago to address the horrendous harassment rife in the military.

Lupe Guillén, Vanessa’s sister, told National Public Radio on July 3 that her sister had been too afraid to report the harassment “because no one would listen to her, just like the other girls from #IAmVanessaGuillen. They [the military] take … harassment … as a joke.”

In fact, in an example of internalized misogyny, a female retired Air National Guard colonel wrote on social media: “Sexual harassment is the price of admission for women in the military. If you’re gonna cry like a snowflake about it, you’re gonna pay the price.”

But it is a price women are no longer willing to pay. Posts on the hashtag #IAmVanessaGuillen reveal how young women especially refuse to be quiet any longer.

Women have posted these comments: “I have struggled for years … to be vulnerable and tell my stories. I have never fully told my parents the things that happened to me in regards to sexual harassment and assault I endured in the Marines. I have NEVER told my husband about being raped in the military.”

“It is hard to put all of the times I was verbally and physically assaulted into a coherent essay.”

“We are women and men who serve and [have] served in the Army, Navy, Marine Corps, Air Force, and Coast Guard. We have all been sexually harassed and assaulted. In the past week, your Facebook or Twitter feed has been flooded with us telling our stories in an effort to bring attention to the fact that Army Pfc. Vanessa Guillén has been missing for over two months after having told her closest family members she was sexually harassed at work.”

“The common thread among all of our stories is that we were afraid to come forward, and that if we did, we would face reprisals and retaliation. Sexual harassment and assault in the U.S. military [are] rampant, with no signs of change unless the way reporting is handled and investigated is massively changed.”

Under capitalism sexism and racism go hand in hand. In the case of the soldiers in Vanessa’s base, let it be known that Ft. Hood, called the “Home of America’s Hammer,” is named after Gen. John Bell Hood, who was a Confederate general.

Imagine a Black or Brown person having to see that every damn day.

Vanessa did not die in vain

The family of Vanessa Guillén are heroes. With their persistence and refusal to suffer alone they have sparked a movement.  Throughout Texas — in Houston, San Antonio, Austin, the Valley and elsewhere — marches were held and thousands of people came out to demand justice for Vanessa, to demand change.

Members of Guillén’s family have collectivized their pain and are continuing to fight for change. They have traveled to Washington several times and are calling for congressional inquiries into the chain of command that failed to save Vanessa’s life, as well as an investigation into the handling of the investigation.

Furthermore, the family is pushing for legislation that would call for a process of unbiased investigation into charges of harassment within the military. The family’s lawyer said the process would be similar to the Equal Employment Opportunity Commission and not be part of the military command.

Vanessa’s death occurred in a moment in history where massive upheaval is underway. There is a rebellion going on in this country not just in the streets, but in the hearts and minds of the people.

Everything is being questioned. Why must young women fear reporting sexual harassment? Why must men be driven to carry out such heinous crimes? Why does the military exist at all? Who is the military defending the people from, when it has been shown that the real enemy is in the White House and on Wall Street?

Why must a young, amazing Latina have to die just because she is a woman?

These are the questions and answers that are being raised today. Vanessa did not die in vain.