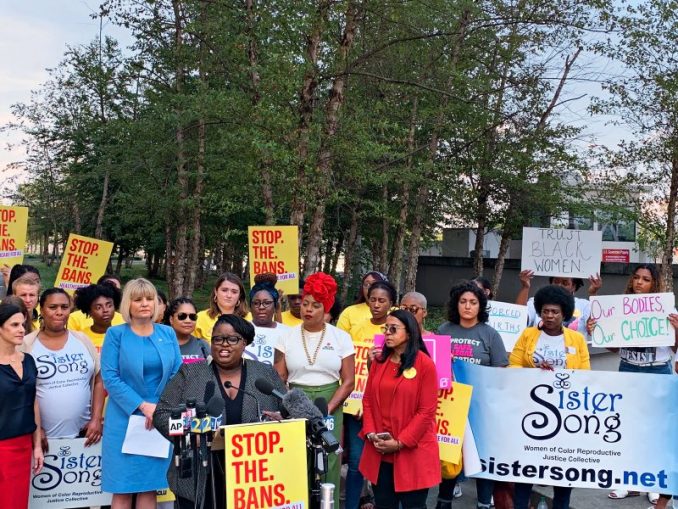 The Louisiana case is a copy-cat replay of the Whole Women’s Health v. Hellerstedt case decided in 2016. That decision struck down a Texas law requiring doctors who perform abortions to have admitting privileges at hospitals within 30 miles of their offices. Written by Justice Stephen Breyer, the decision affirmed that the law imposed an “undue burden” on women (and gender-nonconforming people) seeking abortions because it forced the closure of half the abortion facilities in Texas after it was enacted.

That severely limited access, both geographically and financially, affects those who choose to assert their reproductive right to abortion, especially women of color, youth, rural women, low-wage workers, im/migrants, women with disabilities and survivors of domestic violence. As Breyer pointed out in his brief, abortion restrictions are coercive policies that disproportionately harm Black and Brown communities that already face structural racism.

The concept of “undue burden” became the court’s litmus test that abortion regulations must pass, which originated in the 1992 Casey decision. In Planned Parenthood v. Casey the court upheld the constitutional right to have an abortion, established in Roe v. Wade (1973). And it provided a legal standard for analyzing restrictions on that right based on whether or not it imposed an “undue burden” on women who choose abortion. (Nearly 30 years ago, no justices considered the reproductive rights of gender-nonconforming people.)

So why did the court agree to take on the Louisiana case when it had so recently overturned the Texas case? Because the composition of the court had changed with Trump’s anti-abortion appointees. And Trump’s influential, right-wing, majority white, anti-abortion followers, an avid base of Catholic and Evangelical church-goers, were hoping and praying that the new court would overturn Roe v. Wade. A lot was riding on the decision.

If the court affirmed the Louisiana law, it would force the closure of two clinics, leaving only one in the state. (At present five states have only one clinic: Mississippi, Missouri, North and South Dakota and West Virginia.) It would also give anti-choice politicians in 15 states in the South and Midwest a green light to shutter clinics affecting more than 19 million women of reproductive age (15-44).

Guttmacher Institute analysis estimated that “patients in entire regions of the country may be forced either to travel long distances to obtain abortion services or be left without access to care.” (May 21)

Those on both sides of the abortion issue, who well understand the very different consequences of this decision, were surprised when Chief Justice John Roberts sided with the progressive members of the court in a 5-4 vote.

“I joined the dissent in Whole Woman’s Health and continue to believe that the case was wrongly decided. The question today however is not whether [that case] was right or wrong, but whether to adhere to it in deciding the present case.” He then affirmed the Casey decision and its emphasis on “undue burden,” which, he stated, was obvious in the Louisiana case, given it would leave only one clinic in the state.

“I cannot view the record here as in any pertinent respect sufficiently different than in Whole Woman’s Health to warrant a different outcome,” Roberts concluded. Thereby he chose to honor the precedent set by the Texas case — even though some legal eagles point out that he has sidestepped precedent in other cases.

A longtime commentator on women’s rights, Dahlia Lithwick interpreted Roberts as saying: “Come back to me with the right road map and I’m all yours.” Or “Lie better next time.” She continued: “Roberts is telling states wanting to impose all sorts of needless regulations that it doesn’t matter if they’re utterly without health benefits, so long as the burdens on women are not that bad.” (Slate, June 29)

However, not only did the vote devastate the anti-abortion camp, but it confused some in the reproductive rights community. Had Roberts become a swing vote between the conservatives and the liberals, replacing Justice Kennedy?

No. An influential cluster of pro-choice court watchers unanimously agree: Roberts is, at rock bottom, a lifelong conservative totally opposed to abortion.

So why did he abandon the antis? Because Roberts is more concerned about maintaining the institutional status of the highest court in the country — as the revered, ultimate arbiter of the law of the land that is supposedly above bipartisan politics. He’s also aware of his personal legacy as chief justice.

In keeping with the recent progressive turn in the national political climate after the police lynching of George Floyd and the nationwide upsurge in support for the Black Lives Matter movement, Roberts chose to create a trifecta of progressive 2020 court opinions.

In addition to June v. Russo, Roberts contributed to the recent ruling that the 1964 Civil Rights Act protects all LGBTQ2S+ employees from discrimination based on sex. He played a decisive role in the 5-4 decision affirming the right of over 700,000 DACA (Deferred Action for Childhood Arrivals) youth to remain in the U.S.

Roberts, by giving a nod to the current leftward turn in the country — and away from regressive, racist, patriarchal, fascistic Trumpism — is shoring up the reputation of the Supreme Court and stepping away from some really reactionary decisions. Notably, Citizens United in 2010 that granted First Amendment rights to corporations so they could join wealthy donors and invest in political candidates. (How else do you think Trump got elected?) And the 2013 opinion, Shelby County v. Holder, which gutted the Voting Rights Act and opened the door for the rampant, nationwide attack on voting rights.

As the lawyer at the Center for Reproductive Rights who argued for June, Julie Rikelman, told the New York Times: The decision “will lead to more litigation, not less.” (June 29) The struggle for reproductive justice continues. All those who stand against injustice, racism and sexist oppression need to carry forward the fight for reproductive freedom and bodily autonomy for all.