A rally and march against police brutality called by UNITE HERE Local 26 — a union representing hotel, casino and school dining hall workers — drew upwards of 500 to the Commons in the center of this working-class immigrant city on June 26.

A former manufacturing center that fell on hard times, Lynn is home to Lantinx, Black and white workers. Many labor in the hospitality and institutional food services industries that Local 26 represents. The Lynn Police Department, on the other hand, is disproportionately white in composition. 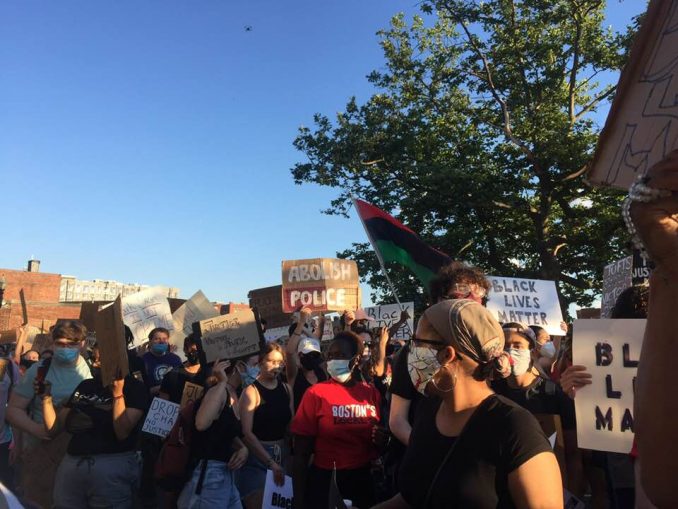 When the Lynn cops brutalized two Black Local 26 members who work in the dining halls at Tufts University on June 15, in the midst of the Black Lives Matter uprising, their racist motives seemed obvious.

June 15 was the same night that Victor had moved into the apartment where he and his friends were sitting on their front porch to finally eat the housewarming dinner they had been preparing for hours. Under the pretense of responding to a noise complaint, cops coming out of 13 Lynn Police Department vehicles assaulted Victor and Alex, as well as their friend Scott.

Cops beat the three workers, failed to inform them of their rights or of any charges. Then the cops further injured them with a “rough ride”in a police van as the cops deliberately made them fear for their lives. Ultimately they were charged with assault on a police officer. They were detained for hours before finally being bailed out.

Local 26 responded to the racist attack on its Black members with a petition that has collected about 5,000 signatures and the June 26 rally that ended in a march and sit-down occupation that blocked traffic in front of the police station for about an hour.

Labor actions during this 2020 BLM rebellion have joined union, Black and anti-police brutality issues in a way rarely combined since the days of the Detroit Revolutionary Union Movement (DRUM) in the 1960s. The Seattle Longshoreman’s union held a one-day strike in solidarity with BLM on Juneteenth (June 19) and the Seattle Labor Council passed a resolution to expel the city’s cop organization this year.

Local 26 may be the first union that has led a rapid response to defend against a racist attack on its own members. This may be a unique action, but it should be repeated whenever members experience such injustice.

This is certainly the first time that every member in the approximately 10,000-strong local received an urgent text. It notified them to show up in  defense of the two members and to oppose the police. Local 26’s action represents an important leap forward for the labor movement.

In contrast to past times where perhaps the union president made a bold statement or a petition was drawn up by a few of the rank and file, this time, as soon as the leadership learned of the incident, they coordinated the entire union to provide urgently needed solidarity. Local 26 also instituted an excellent practice: Union members should absolutely call their union when they have been unjustly attacked.

Many in the crowd, union members and officials, backed the call to expel police “unions” from labor bodies like the AFL-CIO. Leaders from United Steelworkers Local 8751, which represents the Boston School Bus Drivers Union, floated the idea — which got a friendly reception — of drafting a statewide resolution to kick cops out of the Massachusetts AFL-CIO. Their goal is to make this resolution a model for a national campaign.

Besides Local 26 leaders and hundreds of members, there were strong showings from Lynn Teamsters; IUE workers from the nearby General Electric plant, where workers are primarily white and Lantix; Service Employees; and Communication Workers. The North Shore Labor Council brought its banner and a contingent of area teachers, nurses, firefighters and emergency medical technicians.

There was also tremendous solidarity from dozens of  Tufts’ students. Two of them said that Local 26 members belong as much to the Tuft’s community as students do. Community groups fighting against police brutality locally and the statewide Mass Action Against Police Brutality gave speeches on Lynn Commons and in front of the police station.

MAAPB leader Hope Coleman told of calling an ambulance for Terrance, her disabled adult son, in 2013 only for him to be murdered by the Boston Police who responded. The police department considered the murder “justifiable.” Coleman’s story was a powerful reminder of how dangerous every police interaction is for people of color.

This was especially true for young Black people like Terrance, as well as Victor and Alex from Local 26. Speaking out right in front of the LPD building was a risk, said Alex. As the crowd took a knee and raised a fist, he said,  “This will make me a target, but that’s OK. I was born a target.”