July 7 — A people’s tidal wave against white supremacy has swept through the U.S. since the police murder of George Floyd on May 25. The assertion of power by the people against racist oppression has defied curfews, teargas, deadly weapons, mass arrests and unjust laws. 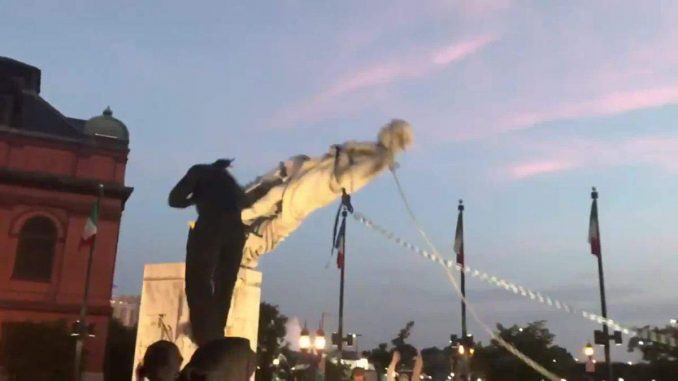 A statue of Christopher Columbus is toppled into Baltimore’s Inner Harbor on July 4.

In only five weeks, this people’s power has changed the political and social landscape of the U.S. — and secured new forward positions from which to battle for more victories.

The New York Times, “newspaper of record” for the capitalist ruling class, had to acknowledge the movement’s power, saying Black Lives Matter “might be the largest movement ever,” involving an estimated “26 million people” in the U.S. On July 3, the Times cited more than 4,700 demonstrations in about 2,500 small towns and big cities since Floyd’s death — still only a partial list. Large, militant protests took place again on July 4 and are continuing.

Led and inspired by the Black Lives Matter movement, the protests represent an unprecedented rejection of white supremacy by white people. By July 3, according to the Times, more than 40 percent of U.S. counties had had a protest. Nearly 95 percent of those counties had a majority white population — nearly three-quarters were more than 75 percent white.

A new consciousness is emerging about the racist function of the police. A June 3 Monmouth University poll found 54 percent of people in the U.S. supported both the protests and the burning down of the Minneapolis precinct station of the cops who murdered Floyd.

The five weeks since Floyd’s murder reflect the truth of Lenin’s statement about revolutionary change: “There are decades where nothing happens, and there are weeks where decades happen.”

Groundwork for the last few weeks was laid by decades of local, regional and national organizing by Indigenous activists, a sustained network of Black and Brown liberation groups, the Reproductive Justice movement led by young women of color, low-wage workers’ centers, im/migrant rights and union activists, and LGBTQ2S+ and disability rights organizations.

A people’s history is written

Big Media coverage has focused on huge corporations and organizations acknowledging Black Lives Matter, as they scramble to deal with the seismic shift in public opinion — and their bottom line. The National Football League commissioner issued a public apology for the league’s racism. NASCAR banned Confederate flags at all its events. Nike made Juneteenth — celebrating the end of slavery in the U.S. — a paid holiday for employees.

FedEx — stadium sponsor for Washington, D.C.’s NFL football team — is exerting pressure to get rid of the team’s racist, anti-Indigenous name and emblem. Indigenous groups have demanded this change since the 1970s and began national protests in the 1980s. Now Big Business has finally had to respond to anti-racist mass pressure exerted by their own workers and by the economic impact of the historic shift in consciousness.

Meanwhile, the struggle goes on in the streets, literally, as huge BLM messages are being painted onto city streets. The original Washington, D.C., Black Lives Matter message traveled down 14th Street to the White House and then spread coast-to-coast from Sacramento, Calif., to Dallas, Raleigh, N.C., to Rochester, N.Y., and many other cities.

A people’s history of the U.S. is being written as everywhere reactionary monuments to racist colonizers, enslavers and white supremacists are dragged from pedestals. North to South  the people have brought down statues of Confederate leaders and generals like Davis, Lee and Jackson; U.S. presidents like Teddy Roosevelt; and contemporary Philadelphia top-cop mayor Frank Rizzo. On July 4, another statue of genocidal Christopher Columbus was toppled in Baltimore, Md., and shoved into the waters of the Inner Harbor.

As these symbols come down, protest is changing the capitalist narrative in popular culture. After thirty-two years of pro-cop propaganda and racist stereotyping, the television “reality” program “COPS” was canceled.

Meanwhile, on June 11, Mirriam-Webster announced it had enlarged its definition of racism to include “systematic racism.”

Activists in motion are rejecting “performative activism” — when “thoughts and prayers” are offered instead of actual material aid. When the prestigious Poetry Foundation sent out a perfunctory “solidarity” during the uprising, poets organized, forced the top white leadership of the board to resign and demanded, among other items, a hefty portion of PF’s $257 million endowment be redistributed by giving directly to Black community organizations.

Across the country, the demand “Defund the Police” is now a struggle to reallocate city and county spending away from cops and into social services. Boston is cutting $12 million from its police budget, Los Angeles $100 million to $150 million, with money to go to Black community services.

In San Francisco unarmed social workers, rather than militarized police, will now respond to “noncriminal” crisis calls. The Seattle City Council banned city police from using or purchasing teargas, blast balls, rubber bullets and other weapons. One billion dollars will be cut in 2021 from the New York Police Department’s monstrous $7 billion budget — a drop in the bucket, but an important concession wrested by the BLM movement.

The uprising has forced the U.S. Congress to initiate a process to limit the 1033 Program, which funnels military equipment to local police departments. Communities like Durham, N.C., have organized to stop the militarization of local police, especially the funding of training programs run by Israeli security forces, which specialize in military occupation.

The “Abolish the Police” movement, which began in Ferguson, Mo., after the 2014 police murder of Michael Brown, is winning significant victories. A “veto-proof” majority of the Minneapolis City Council voted to disband the city’s existing police force, opening a path to community control. School boards in Minneapolis and St. Paul, Denver, Seattle, Portland, Ore., San Francisco and Oakland, Calif., have ended the use of cops in their school districts — shutting down the school-to-prison pipeline.

The battle against racism and the fight for workers’ rights are inextricably intertwined — and the protests have broadcast that fact. During the uprisings, transit unions in Minneapolis, Pittsburgh, New York City, Chicago, San Francisco, Washington, D.C., and Boston refused to transport protesters arrested by the police. In Minneapolis, Boston and Pittsburgh, unions also refused to transport the police! On Juneteenth, a political strike against racism and police terror by the International Longshore and Warehouse Union shut down 29 West Coast ports from Washington state to San Diego, Calif.

Strikes and workplace actions have accelerated, together with BLM protests. Over 500 were documented by independent labor newsletter Payday Report during the first three weeks of June.

Strong actions have been led by Black worker-athletes, like the Kansas State University football players who announced they would boycott games unless the university dealt with racist incidents. Similar intervention from Black professional and college athletes generated pressure that ended in the permanent takedown of Mississippi’s state flag with its Confederate symbol. (clarionledger.com, June 29)

An entire women’s professional softball team, the Scrap Yard Pitch, quit their jobs in protest after their owner tweeted President Trump a photo of them at attention during the national anthem, using them against the BLM movement. Sixteen of the 18 players are white, two are Black, but they were united in tweeting such messages as “We stand with the Black community.” (themarysue.com, June 26)

Unrelenting cop murders and extreme police brutality toward protesters has exposed the role of cops under capitalism as protecting property rather than people. One result is a challenge to existing unions to throw cop associations out of labor organizations. On June 27, Seattle’s Martin Luther King Jr. County Labor Council expelled the Seattle Police Officers Guild. The Writers Guild of America, East has called on the AFL-CIO to expel police groups from its ranks.

More yet to win

The coast-to-coast uprising has advanced the struggle against racism and police brutality immeasurably in just five weeks. From that forward position, more is yet to be won, as cop repression and murders continue daily.

The campaign to end cop immunity from prosecution — “qualified immunity” — is crucial. The cop killers of unarmed Elijah McCain in Aurora, Colo., and sleeping Breonna Taylor in Louisville, Ky., have so far not been charged with any crime.

Some mild reforms have been passed — the state of New York recently repealed a law that kept police disciplinary records secret. But these are not the stringent crackdowns necessary to punish the up-to-now untouched police.

One of the killers of Elijah McClain felt so invulnerable that he joked about a photo other cops made mocking McClain’s chokehold death. The cop was fired for that laughter — but he has not even been charged for killing McClain. Community organizer Terrence Roberts commented: “That is the culture that we’re fighting, where a police officer can murder a Black man, a Black child, and keep his job and stay on the force so he can go make fun of this child.” (ny1.com, July 5)