After 27 days of nonstop protests against police brutality in Philadelphia, city officials finally apologized for their decision to let police and SWAT units use tear gas, pepper spray and rubber bullets on protesters June 1. Philadelphia Mayor Jim Kenney and Police Commissioner Danielle Outlaw held a joint press conference June 25, where they admitted the use of force against people demonstrating on I-676 was “unjustifiable.” Both claimed they changed their minds about the police attacks on protesters based on videos that surfaced since the June 1 demonstration. 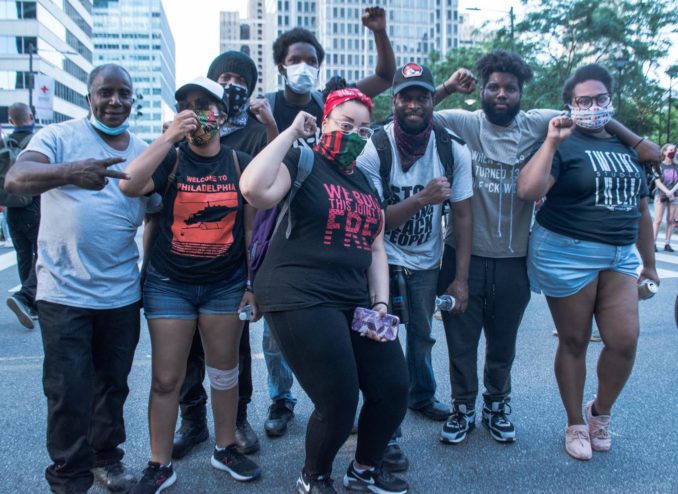 Philly REAL Justice at protest against police May 30.

Most likely the video that forced their hand was a 10-minute clip posted earlier in the day by the New York Times, in which Philadelphia police are clearly shown attacking protesters.

By late afternoon June 1, around 1,000 protesters had peacefully entered the highway. With no warning, SWAT teams moved in from both sides, trapping the protesters between the two units. SWAT, state and local police fired tear gas and pepper spray toward the crowd, even as people tried to escape, but they were trapped on the steep embankment.

Officers repeatedly pepper-sprayed demonstrators, in some cases pulling down people’s face masks before spraying their faces. Many people were injured during the police attack and dozens were arrested. Workers World photographer Joe Piette was injured and his camera destroyed when police fired a rubber bullet directly at him from 20 feet away. Police in tanks later pepper-sprayed him and other demonstrators who were walking home, blocks away from the highway.

A key unanswered question is whether Kenney and Outlaw would have issued an apology had the Times not covered the police attack. Incidentally it took place the same day that Washington, D.C., police, reinforced by local National Guard troops, at the behest of Trump pushed peaceful demonstrators with tear gas, pepper balls and munitions from in front of the White House before Trump’s notorious photo op.

Kenney and Outlaw also failed to address an outrageous 14-3 vote by the City Council on June 26 that approved Philadelphia’s fiscal budget for  2021, but took no action to decrease police funding — a key demand of multiple protests. Many see this action by a Democratic mayor and Democratic city council as a betrayal of Black Philadelphians and the entire working class of the city.

On June 26, members of the Black Philly Radical Collective held their own press conference across from the Liberty Bell. The group includes Philly REAL Justice, the Human Rights Coalition, Mobilization 4 Mumia, MOVE, the Revolutionary Abolitionist Movement and Reclaim Philadelphia.

Speakers denounced Kenney and Outlaw for their refusal to apologize for a police attack on May 31 against peaceful protesters in the predominantly African-American area in West Philadelphia around 52 and Market Streets.

Ant Smith, with REAL Justice, stated,  “There were about 15 of us demonstrating.  Police, SWAT teams and National Guard units quickly moved in, firing tear gas and pepper spray at random people just standing on 52 Street. Police went down the streets in the hood as an army — an occupying force.

“They had a tank, and as it rolled down the streets, a man in the turret just fired pepper spray and tear gas back and forth. At the end of the day we got shot at by the National Guard using rubber bullets. Several people were injured, including one woman hit in the eye and a man hit in his chest. They didn’t use this kind of force against Center City protesters the day before.”

After Smith was arrested by police later in the evening of May 31, he was driven around in a police van until 3 a.m., then dropped off miles from his neighborhood in the middle of a city curfew. He called for “police out of our communities.”

YahNé Ndgo challenged those who attack Black residents because of “looting,” which  took place following the police attack. “People who went into stores to take things wouldn’t be doing this if their needs were being met. They also distributed items to community residents in need. This was not capitalist hoarding.

“We call for funding of communities — not cops.  We want a decrease in funding for the Philadelphia Police Department over a five-year period until it is completely defunded.”

Many Black Lives Matter activists and supporters across the city also denounced the PPD for their openly biased coddling of violent, white right-wing protesters who were allowed, on several occasions, to punch, kick, shove and threaten counterdemonstrators as police stood by, some even laughing at the attacks.

The first instance of this fascist mob violence took place on June 1 in the Fishtown area of Philadelphia, with white men carrying bats, axes and even guns, threatening Black residents. Reporters who tried to cover the scene were beaten by the pro-Trump demonstrators.  In a similar scene on June 23, when 50 Black Lives Matter protesters marched to the statue of Christopher Columbus, they were confronted by 100 people with baseball bats, golf clubs and hammers.

After repeatedly hurling racist slurs at a Black photographer covering the protest, one white man punched him in the face as police did nothing. Attorney Kevin Mincey, who represents some of the BLM protesters who were pepper-sprayed on June 1, stated, “If there was a Black Lives Matter protest where all the participants were carrying baseball bats, hammers and other makeshift weapons, that protest wouldn’t make it 10 feet down the street before police stopped them.” (Philly.com, June 26)