On June 27, Trump signed a reactionary executive order saying that states and cities could lose their federal funding for failing to protect monuments and statues from being either defaced or pulled down. 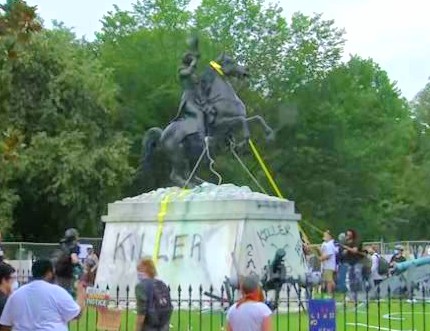 The order was a reaction to countrywide protests against police brutality and white supremacy ignited by the police lynching of George Floyd, which included a wave of Confederate and other white supremacist statues being toppled.

The order states that “anarchists and left-wing extremists have sought to advance a fringe ideology that paints the United States of America as fundamentally unjust and have sought to impose that ideology on Americans through violence and mob intimidation.” The order also says that a conviction of “willful injury of federal property can result to upwards of 10 years in prison.”

Trump was more set on signing this order to preserve the racist legacy of slavery than on dealing with the worse U.S. spike so far in cases of the coronavirus — especially severe new cases for those previously diagnosed as asymptomatic and under the age of 34.

No wonder Trump has been referred to on more than one occasion as the “Last Confederate President.”

On June 28, Trump retweeted a video showing a small pro-Trump demonstration at a retirement community in Florida. A Trump supporter could clearly be heard yelling “White Power!” at anti-racist counterprotesters. (npr.org, June 28)

Trump’s tweed said in part: “Thank you to the great people of The Villages. The Radical Left Do Nothing Democrats will Fall in the Fall.”  Trump’s tweet was removed almost immediately, but not before news commentators asked White House officials if they were “embarrassed” by the posting.

Neither the White House spokespeople or Trump apologized or even distanced themselves from the vilely racist tweet.

These developments are connected to the current double pandemic in the U.S. — systemic racism, especially in the forms of police terror and white supremacy on the one hand, and the coronavirus pandemic on the other hand. The White House is dealing with both in the most callous and despicable way.

While sustained protests are pushing forward a national debate in city councils and even Congress on “defund” and “abolish” the police, the debate over statues with a white supremacist heritage has also become a main focus for activists around the country.

Confederate statues have been taken down either by activists or by official edict in many cities, mainly in the South, from New Orleans to Richmond, Va., to Durham and Raleigh, N.C., but also in the North.

What prompted the signing of Trump’s recent executive order was an attempt by protesters on June 22 to take down the deeply offensive statue of President Andrew Jackson in Lafayette Square, directly across from the White House.

Jackson was not only a slaveowner but also signed into law the Indian Removal Act of 1830 that militarily forced many Indigenous nations off their rightful lands. This genocidal expulsion of Native peoples was ordered so that white settlers could seize vast stretches of land in the South and West and expand highly profitable cotton cultivation using enslaved, unwaged Black workers.

Four activists have already been charged in the June 22 attempt to remove the Jackson statue, now surrounded by a large fence. Protests continue in Lafayette Square, demanding the racist statue be brought down or removed.

Along with Jackson, activists have also targeted monuments honoring other slave-owning presidents, such as George Washington and Thomas Jefferson.

Recently, Princeton University removed President Woodrow Wilson’s name from its School of Public and International Affairs building due to his racist policies toward Black people, including discouraging Black students from attending the university. Wilson ordered a White House special screening of the hideous 1915 pro-slavery film, “The Birth of a Nation.” This movie, which was nothing more than recruitment propaganda for the Ku Klux Klan, was the first film ever shown at the White House.

In a June 28 weekend session, the Mississippi legislature voted to remove the Confederacy’s “Stars and Bars” battle emblem from the state flag — after 126 years of it being flown. The University of Mississippi (“Ole Miss”) took down the state flag on its campus in 2017 because of sustained student protest. That has continued against a Confederate monument still standing on the grounds — a rallying point for white supremacist violence for decades.

NASCAR and the noose

Following the overthrow of the radical period after the Civil War known as Black Reconstruction, thousands of Black people were lynched by white supremacists — including police — especially in the South.

Since the rebellion began in late May, three African-American men have been found dead with nooses around their necks in various parts of the U.S.  The names of the three African Americans are Robert Fuller, Malcolm Harsch and Dominique Alexander.  There have been no arrests related to any of these deaths.

On June 24 the FBI ruled that the noose found hanging in a garage stall assigned to race car driver Bubba Wallace would not be classified as a hate crime. Wallace is the only Black driver on the National Association for Stock Car Auto Racing circuit. He had demanded that NASCAR ban the Confederate flag from being brought into the stands by fans or flown on the grounds during races.

After carrying out this offensive tradition for 72 years, NASCAR officially banned the flag. But soon afterward the noose was found, targeting Wallace. Racists proclaimed the noose a “hoax” on Twitter and accused Wallace of planting it.  In reaction to the FBI ruling, Wallace stated that he did not “overact” to the noose in light of what was going on in the country following the murder of George Floyd.  (ESPN, June 25)

Noteworthy in terms of ongoing white supremacist violence is the fact that, on June 28 in Louisville, Ky. – where police shot and killed a protester on June 2 — someone shot into a crowd of protesters, killing one of those demanding the arrest of the three white police officers who were responsible for the March murder of 26-year-old Breonna Taylor. The Black EMT health provider was shot eight times as she slept. None of the cops have been arrested or even charged with this racist crime.