Rallies demanding the U.S. Senate approve funding that would “SAVE OUR POSTAL SERVICE” were held on June 23 from coast to coast. The message of the day: Include a $25 billion USPS rescue plan in the next Senate stimulus package.

Without funding, it is projected the agency could run out of money this year because of lost volume and revenue due to the pandemic. At least 70 postal employees have died from the coronavirus. The U.S. Senate is scheduled to deliberate on a new stimulus bill in July. 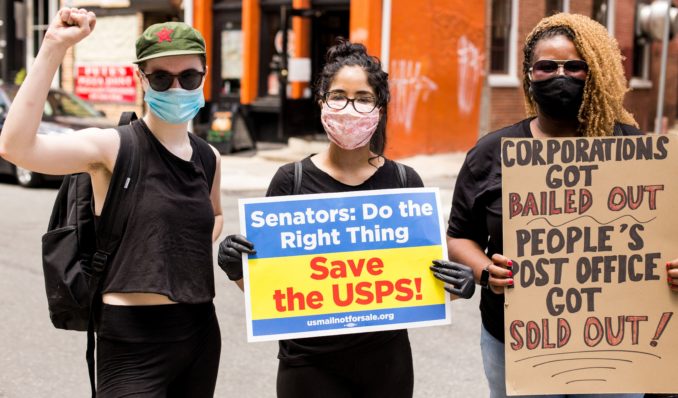 The protest in Philadelphia was especially noteworthy for the support shown for the post office and its workers by local community and labor organizations and the solidarity with Black Lives Matter expressed by unionists. Over 50 people held signs, cheered, chanted, marched, spoke or car caravanned for two hours.

In front of an historic working post office dedicated to the first U.S. Postmaster General, Benjamin Franklin, demonstrators heard from speakers on why the postal service must be allowed to keep delivering the mail. Nick Casselli, president of the American Postal Workers Union (APWU) Local 89, and Joe Rodgers, president of the National Association of Letter Carriers (NALC) Branch 157, started off the rally.

The highlight of the day was a speech given by Kempis Songster of the Amistad Law Project. Sentenced to life in prison when he was just 15, he spent 30 years behind bars until he was released due to a Supreme Court decision making life sentencing of youth unconstitutional. The crowd was spellbound as he spoke on the importance of mail for incarcerated people.

Songster described how the Pennsylvania Department of Corrections requires mail to be sent to a Florida company where every letter, photograph, card and child’s drawing is copied, and the photocopy is sent to prisoners. It results in each incarcerated person receiving a black-and-white version of the original documents. The copy fails to capture their “family’s tears on the original letter,” said Songster. He finished by stating that defending the U.S. Postal Service is part of protecting everyone’s right to communicate with our families and society at large.

Community and Postal Workers (CPWU) members who organized the rally followed up on June 25 by getting the Philadelphia City Council to pass a resolution that “calls on our US senators and congressional representatives to support the appropriation of funds to sustain the US Postal Service, and to ensure the Postal Service continues to function as a universal public service.”

Corporations got bailed out, Post Office got sold out! 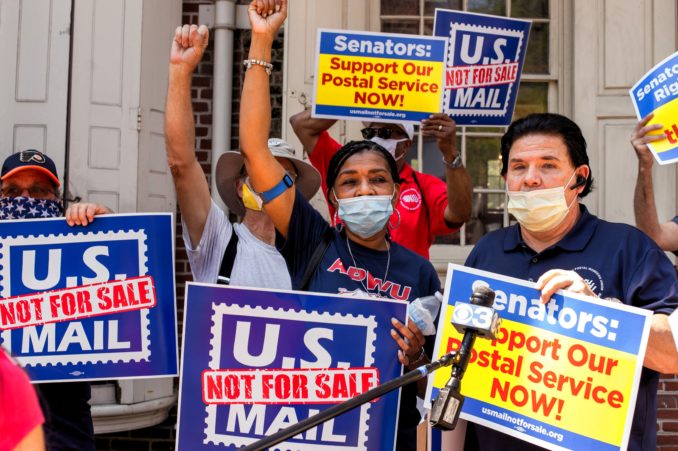 Postal demonstrations were timed to coincide with the delivery of 2 million petitions to the Senate in Washington, D.C. APWU President Mark Dimondstein, actor John “Bowser” Bauman and Rahna Epting, executive director of MoveOn, led a 75-car caravan containing the petitions in huge white Express Mail cartons to the foot of Capitol Hill. The petitions call on lawmakers to enact the Heroes Act, including $25 billion to save the U.S. Postal Service from financial devastation the coronavirus has caused.

“The post office is literally under threat of running out of money,” Dimondstein said. “The Cares Act”— the prior $2.2 trillion aid bill Congress passed in March — “generated over $500 billion for private corporations, but nothing for the post office.”

Public opinion polls show 91 percent support for the Postal Service — especially in rural areas whose residents depend on it for delivery of food, medicines and other vital items during the pandemic.

And 69 percent of respondents backed a direct, cash, no-strings-attached payment to the USPS, which is what APWU, NALC, the Mail Handlers/Laborers, the AFL-CIO, Jobs With Justice, the Alliance for Retired Americans and other supporters advocate.

Joe Piette is a retired letter carriers and member of the NALC.