June 21 – For the thirteenth week in a row, the number of initial claims the Bureau of Labor Statistics counts for unemployment insurance was over 1.5 million.

Now every state plus the District of Columbia has begun the process of loosening the restrictions it had imposed in order to limit the spread of the coronavirus. Relaxing these public health measures, they argue, is necessary to restart the economy.

President Donald Trump and his cronies have put the virus in their rearview mirrors. His Coronavirus Task Force has stopped its briefings, signalling, “Do your own thing.” Trump has basically avoided the topic since he made some ridiculous suggestions for which he was soundly and rightfully mocked. 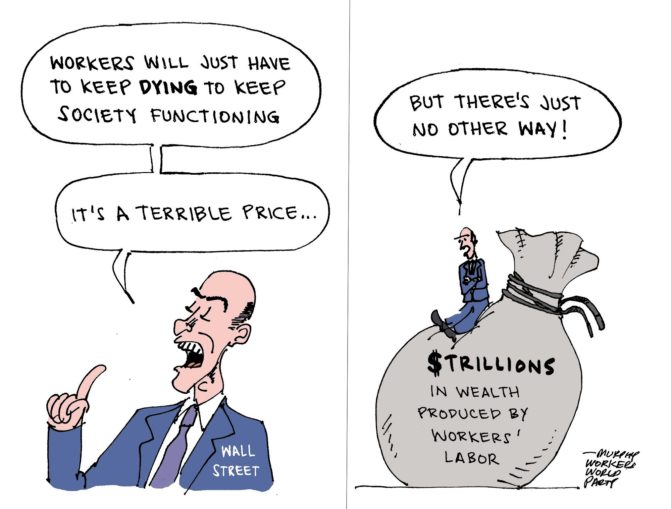 But the situation of workers in this country has rapidly deteriorated. So rapidly that accurate figures are hard to come by. From having the tightest labor markets in decades at the beginning of February, the official unemployment rate rose to 13.7 percent in May.  However, the Bureau of Labor Statistics computes a more accurate rate, the so-called “U-6” rate, which reached 21.6 percent in May. This  rate is considered by many economists to be the most accurate measure of a country’s unemployment because it includes the percentage of the labor force that is unemployed, underemployed and discouraged.

With one out of every five workers in the United States unemployed, the state-run unemployment insurance offices, poorly funded and partially privatized, have been overwhelmed with applicants.  Millions of workers have had to wait weeks, sometimes even months, for their checks to arrive.

The number of claims for unemployment insurance adds up to well over 41 million since the crisis began. In addition, some 700,000 workers who were self-employed or otherwise ineligible for state jobless benefits have filed new claims for Pandemic Unemployment Assistance, a federal aid program.

But the PUA is scheduled to sunset at the end of July, threatening a huge income loss for tens of millions of workers. Also going to end is a substantial amount of money that many workers have been receiving from the states.

It is difficult to tabulate how many workers are with or without a job, are in a temporary situation or are discouraged workers with a side job, especially when floods of workers come into the labor market whenever they see the glimmer of a job. Therefore, economists and business analysts use the number of claims for unemployment insurance as a rough and ready indicator of the health of the economy.

That’s why they are so pessimistic, now that the number of claims has amounted to more than 1.5 million for the thirteenth week in a row.

Many state and local governments are dreading July 1. The continuing economic collapse means many workers will not be able to make their July rent or mortgage payments. Evictions and foreclosures are expected to rise rapidly.

State governments are also facing other big problems scheduled to pop on July 1, the date when many of their fiscal budgets begin. They are responsible for unemployment insurance, public health, public housing, education, fire fighting in medium to large cities and Medicaid — which provides health insurance for the poor. Their revenue — mainly from sales and income taxes — has been devastated by the economy’s collapse.  Their response to the pandemic has been costly.

This means the states will be forced to make deep cuts in public spending that will entail millions of layoffs and major struggles with public sector unions. This may well turn out to be a hot summer indeed.