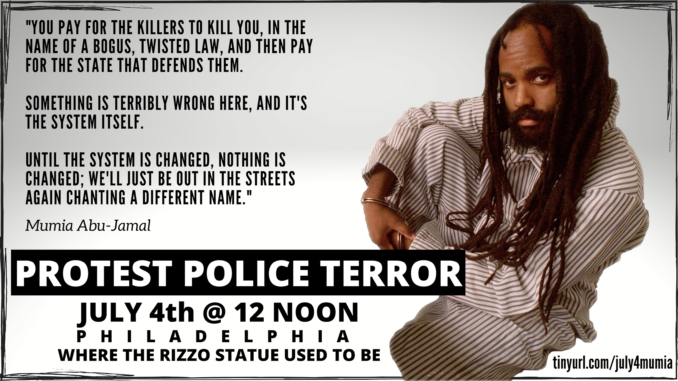 This statement was issued by the Prisoners Solidarity Committee of Workers World Party. Contact the PSC at [email protected].

THERE IS  ONLY ONE WAY THE POLICE DICTATORSHIP OVER PHILADELPHIA CAN BEGIN TO END AND THE MESSAGE OF THE GLOBAL UPRISING BE HEARD: FREE MUMIA ABU-JAMAL NOW!

At this moment of a global uprising against systemic police racism sparked by the public torture and lynching of George Floyd, this injustice of historic and global significance must finally be reckoned with.

If that is not done, there is no way that Philadelphia, or this country, can move forward from this moment toward a future without racist police terror.

The prison gates must open, and Mumia Abu-Jamal — the most famous political prisoner in the world and a living symbol of the struggle against racist police repression and for the Black Liberation movement — must walk through to freedom. And it must happen now!

There can be no further real discussion in Philadelphia about reining in police racism until Mumia is free. If the system fails to do that, then the system is the enemy of those marching everywhere for justice.

Removing Frank Rizzo’s statue from Center City was a symbolic gesture. But it means nothing if Mumia is not freed at once. Unless that is done, the entire political and judicial establishment of Philadelphia will remain unrepentant accomplices to structural police racism. They will remain enemies of history and will remain under the dictatorship of the police.

Mumia Abu-Jamal is a former leader of the Philadelphia Black Panther Party, a supporter of the MOVE organization, a prominent award-winning journalist —  and a political prisoner for nearly four decades. In the early 1980s, Abu-Jamal was the president of the Philadelphia chapter of the National Association of Black Journalists, and his news broadcasts and commentaries were heard on numerous radio stations.

Mumia  consistently criticized Rizzo’s racist policies on public radio and in the press. Rizzo, as a former police commissioner, was one of the most notoriously outspoken racist figures in the 20th century. He declared war on the Black movement in Philadelphia. Rizzo’s police created a list of 18,000 activists to keep intelligence on, most of whom were Black radicals like Mumia. He developed a police file on Mumia — over 800 pages long — of information gathered via wiretaps and other counterintelligence practices. That racist harassment and anti-Mumia sentiment remain the cause of Mumia’s incarceration to this day.

Though Rizzo is gone, the Fraternal Order of Police has continued the campaign against Mumia.The FOP, representing the Philadelphia police and police across the country, has demanded that Mumia Abu-Jamal never leave his prison cell alive.

The FOP has so much political power —  the kind of power that politicians and judges are deathly afraid of — that the police are essentially able to impose a dictatorship over the entire system. It is hard to find a politician in Pennsylvania, including Philadelphia Mayor Jim Kenney and most of the state’s supreme court justices, who has not received FOP campaign contributions and endorsements.

Struggle in the streets aims to break police dictatorship

In truth, the global uprising in the streets is more than anything else a struggle to break the dreadful political power of the police and organizations like the FOP that represent the police. This vast power enables the police to abuse, beat and kill Black and Brown people with impunity, to lie in order to protect themselves from prosecution, and to lie and conspire with prosecutors to send people to death row and into the prison-industrial complex.

Were it not for this FOP dictatorship, Mumia Abu-Jamal would have been freed a long, long time ago. The police dictatorship has demanded that none of the voluminous evidence of judicial misconduct in Mumia’s trial be acted upon, that witnesses not be heard and that a new trial never be granted.

Earlier this year the FOP used its political leverage over the Pennsylvania Supreme Court to coerce the court to accept a rare King’s Bench Petition calling for them to investigate allegations that Philadelphia District Attorney Larry Krasner was biased toward Mumia in handling his current appeals, forcing another unnecessary delay in his appeal.

Because of the police dictatorship, Mumia has spent the last 38 years either on death row or in maximum security. Mumia’s health has been declining due to the neglect of prison officials, making his immediate freedom even more urgent. After spending more than 40 years in prison, Mumia’s good friend, Delbert Africa, one of the MOVE 9, recently died only six months after his release because his health issues were neglected by prison officials.