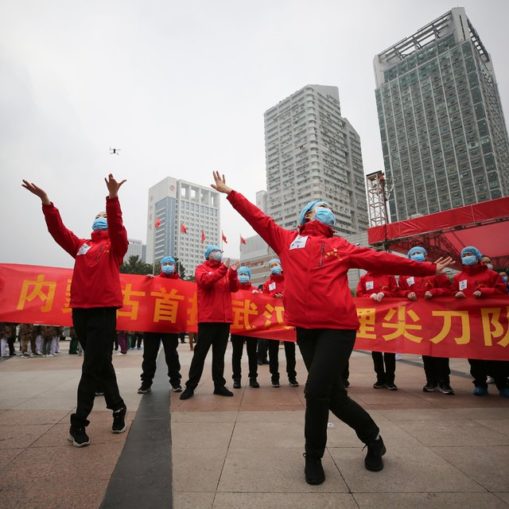 Take the fact that the People’s Republic of China, with four times the population of the U.S., has had far fewer COVID-19 deaths, even though it was the first country to be confronted with this new disease.

How do defenders of the capitalist system deal with that fact?

They don’t. They just ignore it.

Yet according to the website Coronavirus Update, which tracks the numbers of cases and deaths all over the world, the facts as of June 22 were these:

When seen in relation to population size, the contrast is even more remarkable. For every one million people, the U.S. had 369 deaths. China had just three deaths per million people.

WW wrote about this at the beginning of May. At that time, the U.S. had 206 coronavirus deaths per million people. In just seven weeks, that ratio has increased to 369 per million.

China’s figure has remained the same — three per million.

Just one generation ago, China was still a poor country struggling to develop. The U.S., by contrast, has boasted of its economic and technological prowess for at least a century and a half.

So what are the Chinese doing to combat the virus that the U.S. is not?

It was only a few months ago that we saw accounts of how the Chinese government handled the serious outbreak of the virus in Wuhan. An immediate quarantine of the area was established. Contact tracing was implemented. Almost overnight, new field hospitals were set up to isolate and treat the sick.

China may now be seeing a second wave of the virus — and is prepared to contain it as effectively as it did the first cases.

How are they doing this? China’s strength relies on the solidarity of its people to work together in a time of crisis.

It is impossible to ignore the difference in social systems behind these glaringly different outcomes. The U.S. is unabashedly a capitalist country, one where competition is hailed as a virtue — even though the wealthy have the ultimate control.

Also figuring into the spread of the virus in the U.S. is the racism that pervades this society. A recent study by the Brookings Institution on “Race gaps in COVID-19 deaths are even bigger than they appear” concludes that “The age-adjusted COVID-19 death rate for Black people is 3.6 times that for whites, and the age-adjusted death rate for Hispanic/Latino people is 2.5 times that for whites.” Racism pits people against each other and is particularly manifested in competition over jobs. To counter this, progressives have long fought for the slogan “A job is a right!”

China is a country transformed by a socialist revolution that relies not on competition but on cooperation and human solidarity. It is not perfect. How could it be in a world still dominated by capitalist imperialism? But its response to the pandemic shows how far China has come in its journey to transform human relations.

How different from the divisiveness that people in the U.S. get from the capitalist government, no matter which party is in power.

To overcome the imposed divisions in the U.S. that keep the working class from realizing its power to create a better world, change is coming now from the cooperation of movements rising against racism, sexism, mass incarceration and the oppression of immigrants, as well as by people living with disabilities and LGBTQ2S+ people.

Cooperation and solidarity: These are the greatest antidotes to any disaster, natural or human made. And a socialist system develops and strengthens these qualities among people.