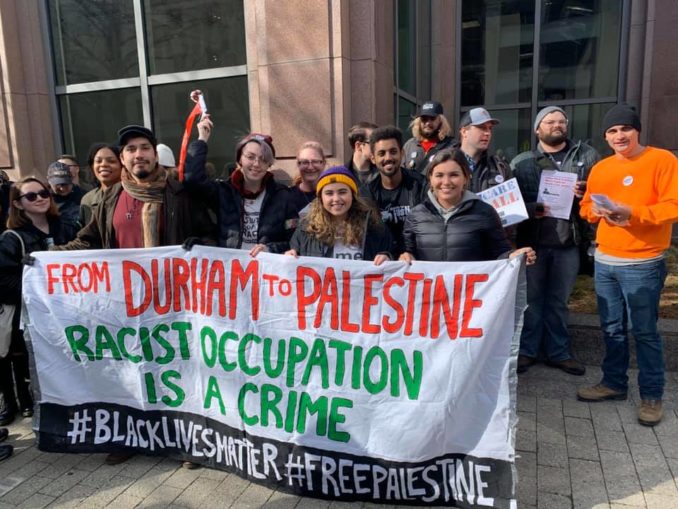 As the uprising rocks the U.S., increasingly the veil over policing — a form of neocolonialism — is wearing thin. In the Triangle area of North Carolina, home of the Demilitarize!Durham2Palestine movement, solidarity with Palestinians —  world leaders in struggle against racist occupation and colonial-state violence — is more important than ever.

As the United States is the central sponsor of Israeli apartheid, those of us in the U.S. can support Palestinians by stopping the flow of resources

One way the U.S. upholds the Israeli occupation is by using dollars from massively overfunded police departments — which often make up about half the general budget of towns and cities, not to mention federal, state and county agencies — to pay the Israeli Defense Force to “train” officers.

These police “exchange programs” create the worst of all possible worlds: The oppressive techniques of U.S.-based police bodies and the occupation of Palestinian areas combine to thwart Black Liberation in the U.S. as well as Palestinian freedom.

In the midst of the recent uprising here in Durham and Raleigh, police increasingly turned to techniques learned from the IDF, even as they faced newfound calls for defunding.

Exchange programs take place all across the U.S., from Vermont — where Vermonters for Justice in Palestine prevented an Anti-Defamation League-backed exchange program from taking place — to New York, Los Angeles and, perhaps most infamously, Ferguson, Mo., the site of the police murder of Michael Brown in 2014

Demilitarize!Durham2Palestine has been opposing these programs in their city.

The largest program in the U.S. — Georgia International Law Enforcement Exchange, based in Atlanta — trained the current Durham Chief of Police Cerelyn Davis, who was a deputy chief in Atlanta before moving to Durham. Her presence ignited the Demilitarize!Durham2Palestine movement in 2016

Bryant’s training — by the Israeli National Police Department — focused specifically on “counterterrorism.” In the midst of uprisings rocking the city and the nation, Bryant was trained and chosen to escalate neocolonialist state terror in Atlanta.

Palestinians know all too well that police are an occupying force; occupied territories there are frequently likened to open-air prisons. Freedom of movement is denied under apartheid policies that confine Palestinians, not just to inside the settler colonies, but often within their own homes.

In occupied Hebron, Israel Defense Forces conduct night raids of homes, detain Palestinians indefinitely, kettle (box in) children and bombard them with tear gas, and commit massacres on an almost annual basis. Palestinians have had to live with having tear gas fired into their own homes

Palestinians were the first to experience “riot control” technologies, such as “sound canons” designed to cause as much pain to as large a crowd as possible, and various forms of injurious rounds such as sponge batons or “rubber bullets” and the use of “tasers” as a form of torture.

The oppression of Palestinians is part of the broader global trend of  the U.S. empire, though the tactics used for ethnic cleansing in Palestine were first developed and set in motion by the British empire. The techniques refined there have been put in place elsewhere, from U.S.-Saudi involvement in Yemen to the U.S.- and European Union-backed Moroccan occupation of the Sahrawi Arab Democratic Republic to U.S. police departments oppression of Black, Brown and Indigenous people

Ferguson to Sahrawi, Vermont to Yemen, Durham to Palestine, Atlanta to Nicaragua, occupation is a crime. Free Palestine! Free them all!