Since Trump announced that his first campaign rally would be in Tulsa, Okla., on June 19, there has been renewed interest in the 1921 racist Tulsa massacre that targeted “Black Wall Street.”  The rally has since been rescheduled for June 20.  Decades later, Tulsa has continued its white supremacist legacy with the lynching of Terence Crutcher, an unarmed 40-year-old Black motorist gunned down on Sept. 16, 2016, by a white Tulsa police officer, who was not charged with murder.  On June 4, two 13-year-old Black youth were arrested for “jaywalking” by white police officers.  Their body cameras show the police choking a youth as they tried to put him in handcuffs while he is yelling, “I can’t breathe and call my mama.”

This article first appeared in the June 10, 1999, issue of WW during the U.S. bombing of Yugoslavia. 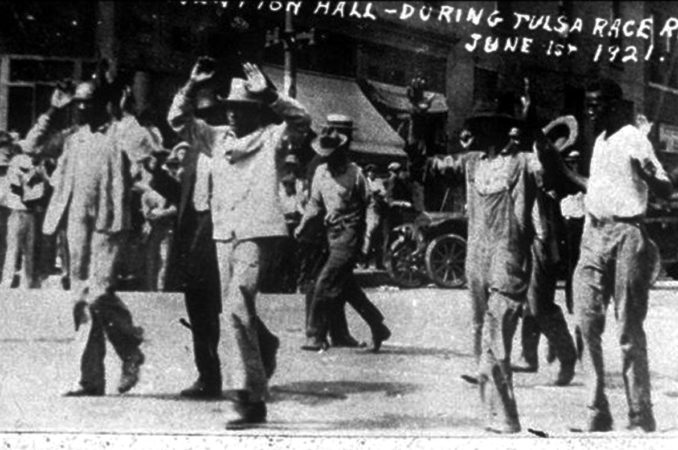 The main argument for the U.S./NATO bombing of Yugoslavia supplied by President Bill Clinton, the Pentagon generals and the big-business media is the alleged “ethnic cleansing” of Albanians in Kosovo. This can only be stopped if the United States and NATO intervene, say NBC, CBS and ABC.

NBC, of course, is owned by one of the biggest Pentagon contractors, General Electric.

But the U.S. government has never cared about the plight of any oppressed grouping. Its policy is to pit one oppressed group against the other to secure its brutal class rule.

A specific incident in U.S. history that exposes the hypocritical nature of the racist, imperialist U.S. government — and is rarely talked about — took place in Tulsa, Okla., in 1921.

Before the righteous rebellions of the oppressed Black masses in Watts, Newark, Detroit and elsewhere in the late 1960s, there was the “Tulsa Race Riot of 1921.”

Never heard of it? A lot of people have not.

Investigations begun in 1997 concluded that this “riot” could more appropriately be described as a massacre. Mass graves of at least 300 Black victims of racist violence have been uncovered, according to the Tulsa Race Riot Commission.

The official report had stated that 36 people died. Yet many historians now say that more Black people were killed in Tulsa than in any other recorded “riot” in U.S. history. Excavations of the grave site will begin this summer.

What was the root cause of this terrible massacre?

Millions of Black people were forced to leave the South at the turn of the 20th century to escape the savage lynchings, wretched poverty and other remnants of slavery. Thousands of Black people migrated to Tulsa.

Oil had been discovered throughout the Southwest, a region once known as “Indian Territory” that had been a part of Mexico. Glenn Pool, 14 miles from Tulsa, became known as the “richest small oilfield in the world.” By 1907, Oklahoma had become the center of the country’s oil production, producing 300,000 barrels a day.

Black Tulsans were trying to take advantage of this economic boom by establishing their own businesses in the Greenwood area.

The people of Greenwood were attempting to carry out their own brand of post-Civil War Reconstruction.

Many other Black people were forced to work in the white areas as domestics or shining shoes. This was a testament to the fact that whites still dominated the overall economy.

The white political establishment attempted to whip up hysteria against the organizing efforts of the Industrial Workers of the World and against Jewish people. The predominantly white police force forged a relationship with the Ku Klux Klan and other white vigilantes.

On May 30, 1921, Dick Rowland, a young Black shoeshine man, was falsely accused of accosting a white woman in an elevator shaft. He was arrested immediately.

The next day the Tulsa Tribune ran an editorial entitled “To Lynch a Negro Tonight.”

A white mob numbering 2,000 gathered outside the jail in an attempt to lynch Rowland. A heroic group of 50 to 75 armed Black men, dressed in their World War I Army fatigues, confronted the racists. As a white man tried to physically disarm a Black man, a shot was fired. The Black men fired back in self-defense. But they were overwhelmed by the armed mob of racists.

For the next several days, gangs of armed whites went into the Greenwood section setting fire to homes and businesses and shooting every Black person in sight. Dr. A.C. Jackson, one of the top surgeons in the country, was murdered after surrendering himself to a group of whites. The racists also went into their own white neighborhoods searching for Black domestic workers.

The Chicago Defender reported that Black neighborhoods in Tulsa were bombed from the air by a private plane equipped with dynamite. Other reports said the police had commandeered private planes to fly over the area. This is the first report in history of airplanes being used to drop explosives.

On June 1, some 6,000 Black Tulsans, including children, were rounded up and imprisoned by the racists. Reminiscent of apartheid South Africa, Black people who were not imprisoned or interned were forced to carry green badges saying “Police Protection.”

In the meantime, whites were given a free reign to continue their looting and rampage of Greenwood without interference from the police or the National Guard.

Once the internment was over, a thousand Black Tulsans were dislocated and forced to spend the winter in tents and board shacks. The city was not legally obligated to restore the houses and businesses of Greenwood.

Not one white person was ever arrested for taking part in this racist attack. The young white woman whom Rowland supposedly attacked never pressed any charges against him. He was eventually released from jail.

The truth about the Tulsa massacre should be publicly exposed. And the U.S. government should be made to pay reparations to the Black people of Tulsa and to all the living descendents of slaves.

Some material for this article was taken from “Death in a Promised Land: The Tulsa Race Riot of 1921” by Scott Ellsworth (Baton Rouge: Louisiana State University Press, 1982).