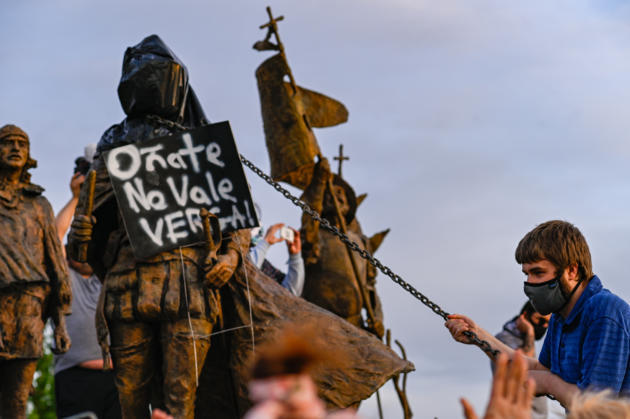 The uprising in response to the murder of George Floyd has become a movement against white supremacy. Generations of anger have exploded against settler colonialism and slavery and all white-supremacist historical monuments. In New Mexico, the Pueblo Nations still seethe against the genocidal conquistador Juan de Oñate, who led Spanish troops to conquer and occupy the Rio Grande Valley.

The year 1598 began centuries of Spanish oppression. In 1599 after Spanish troops defeated Acoma Pueblo after a fierce battle, Oñate killed 800, ordered all Indigenous Acoma Puebloans enslaved, and ordered his men to cut off a foot of every male warrior over the age of 25. Indigenous resistance peaked in the 1680 Pueblo Revolt, led by Po’pay, which was the second-largest setback to Spanish colonialism in the hemisphere, driving the Spanish out for 12 years.

This June 15, after Oñate statues had been removed in Española and Alcalde, dozens of protesters rallied at the site of one in downtown Albuquerque. Armed right-wing militia elements came out to oppose the demonstration. One of them, who pushed three women and maced another, was then pushed out of the demonstration when he pulled a semi-automatic weapon and fired off shots, wounding Scott Williams, a demonstrator. The statue was removed by the city of Albuquerque the next morning. (tinyurl.com/yamjdnva)  The following is the Pueblo Action Alliance statement on demonstrations around Oñate Statues in Española (Tewa Territory) and Albuquerque (Tiwa Territory), N.M.

Yesterday was a historical moment in the town of Española, N.M., where the long-standing statue of Oñate celebrated the genocide of the Pueblo Indigenous people of New Mexico. Rain clouds gathered over the museum that protected this figure of rape and colonialism. I could feel our ancestors surrounding us with their blessings during the removal of the Oñate statue that stood too long on stolen Tewa Pueblo territory. The Tewa, Tiwa, Towa, Zuni and Keres language keepers unitedly organized against Spanish conquest that threatened our ways of life and kept us from practicing our sacred ways of life.

And yet, to this very moment, we are unified as Pueblo on the removal of monuments that glorify murderers. We should be proud of this moment. We should be proud every day. And we should never let the colonial disease desecrate our ways of life and our sacred places.

But the scene wasn’t the same in Tiwa Territory, present-day Albuquerque, New Mexico. The Oñate statue at the “La Jornada” monument outside of the Albuquerque Museum gathered many Indigenous relatives, one of our youth interns and local community members to demand the removal of this statue as well. Those supporting the removal were unarmed demonstrators, but were met with the N.M. Civil Guard — a self-organized, white-supremacist militia who have been showing up at Black Lives Matter actions and other actions, intimidating protesters with their exposed firearms and military garb.

Last night, the incident escalated when the counterprotester, Steven Ray Baca, showed up to the protest instigating those in attendance. He was first seen moving through the crowd, seemingly looking like an “ally.” It was [not] until he started harassing those in the crowd, when a womxn blocked him from the statue and he threw her to the ground, injuring her. A few defended themselves against him, which further escalated the situation and put the crowd in danger. In Baca’s irrational rage, he then maced a womxn of color, while two other men came to their defense, and that is when he pulled out a gun and shot three or so times, wounding an ally. [Scott Williams] is still in hospital, and you can donate to his [and other protesters’ legal and medical fees] here. (tinyurl.com/y9h8mr85)

The Albuquerque Police Department riot police came to the scene only after a person was injured. They arrested the N.M. Civil Guard militiamen and Steven Baca. But what was the most troubling to witness was how these domestic terrorists were treated. We have seen countless videos of police inflicting violence and brutality on unarmed Black, Indigenous and people of color, and yet these men were able to sit on their asses comfortably and unharmed. We feel as if their arrest was to remove these men from another dangerous situation as riot police then began to administer tear gas and rubber bullets at the unarmed demonstrators. Many of our relatives were harmed by these less lethal weapons and no de-escalation methods were administered. Just straight violence to those only armed with signs and their voices.

This type of violence against the community displays the uplifting of white supremacy; the police weren’t there to protect anyone except their allies. The APD has been seen coercing with N.M. Civil Guard, and some have even heard on their police scanners that these men are “friendlies.” We identify both the APD and N.M. Civil Guards as enemies to Black, Indigenous and people of color and demand their abolishment. These military forces don’t and will not protect us.

As the Environmental Justice Director of Pueblo Action Alliance, and as a Tiwa womxn, I do not consent to the violence continuously happening on stolen Tiwa Territory. Our ancestors didn’t just die for the revolution of Pueblo people, but they also killed to ensure that we are the surviving descendants of the Pueblo Revolt of 1680. That we remain the descendants of the war in Acoma and the descendants of any war on Pueblo territory. We will not be forgotten and we will fight until the day we thrive in peace.

We are the extension of 1680 and we are not going anywhere. We will continue to occupy our ancestral homelands and continue to fight for Indigenous liberation, sovereignty and revolution. Kherkem/Thank you to everybody that stood for what was right and advocated for these racist monuments to be removed and hopefully destroyed. Our thoughts, prayers, and energy go to the victim and the victim’s family. Thank you on behalf of Pueblo Action Alliance coming from Tiwa territory. Let’s see to it that all these monuments never exist in our territories ever again.

“A testament to a lineage of tyranny and oppression. Standing at the door of reconciliation for my Indigenous people is a constant reminder of slavery, genocide, and sexual assaults on our women. Yesterday was a double-edged sword ― we continually de-escalated the tensions between our people and the domestic terrorist that is the N.M. Civil Guard.” ― Trenton DeVore, PAA Youth Intern

“Yesterday’s incident added another layer of historical trauma that our people will continue to need to heal from. As a mother and lead with our Youth Internship, it is my duty and role to ensure that I continuously do the work to break the harmful cycles that perpetuate violence against our youth and peoples. This means calling out systemic racism that is embedded in every inch of our society. I will not remain silent. We, PAA, will continue to uplift our peoples, for us to continue to thrive. It is our lifework as the descendants of Pueblo Revolutionaries.” ― Reyes DeVore, Community Outreach Director

“Strength to those who rose up to the evils yesterday. I love my people. I love those who show no fear, are connected to our just cause, to our communities, to each other, and the rights to live: to breathe. We know the truth of when it comes to being heard, seen, respected — our voices have been silenced for way too long. Enough is enough! The cowardly actions of the N.M. Civil guard only further gives us fuel in seeing this struggle through. Statues and struggle yesterday, Revolution today, Liberation tomorrow.” ― Sheldon Tenorio, Creative Strategist