Ever since Adama Traoré, a person from the West African country of Mali living in a northern suburb of Paris, died in 2016 while being questioned by three members of the French national police, the coalition The Truth About Adama Traoré has been campaigning to expose this as a significant example of the racist violence that French cops dispense.

While French cops don’t kill many people compared to cops in Brazil or the U.S.  –— the 10 to 15 on average a year is nowhere near the over 1,000 killed in the U.S. — they have beaten, maimed and blinded hundreds in recent years. The extent of French police brutality has been well documented in law suits filed by Yellow Vest protesters. 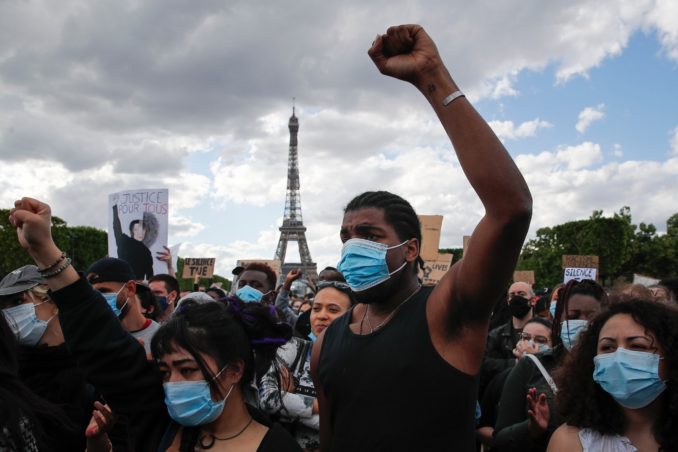 Authorities issued the final autopsy report on Adama Traoré’s death as May ended. The coalition then called for demonstrations on June 2 in Paris, Marseille, Lille, Lyon and Bordeaux.

The coalition expected about 1,000 people to turn out.  But the protest on June 2 followed the news of the brutal killing of George Floyd in Minneapolis and the beginning of mass demonstrations in the U.S. According to the cops over 20,000 people came out — the coalition estimates 60,000.  Many placards and banners were expressions of solidarity — George/Adama, the same fight (in French).  Protesters also purposely carried signs in English, such as “#Black Lives Matter” to make their solidarity clear to the world.

All who have been demanding system changes — youth from suburban neighborhoods (French suburbs are filled with poor and working-class Black and Arab communities) came out side by side with cultural and sports personalities, Yellow Vest protesters and climate activists — and stood in front of the Paris courthouse to make their anger over police violence heard. White workers with steady jobs, who, according to the major daily newspaper Le Monde, are beginning to see the “relevance of this struggle,” also joined.

And indeed their voices were heard.

The next week Christophe Castaner, the minister of interior who is in charge of the police throughout the country, went on television to announce that cop chokeholds were forbidden and cops caught engaging in racist violence would be severely punished.

At the next demonstration the Adama Traoré coalition called, a slightly smaller response in Paris was still militant. The people came out despite warnings from the cops that large assemblies were forbidden because of the danger of contamination from the coronavirus.

At the start of the Paris march, a group of right-wing “white rights” activists dropped a banner from an apartment house.  People living in the apartments ripped the banner down, while marchers below chanted, “We despise fascists!” The whole scene was covered on French Television’s national news.