When the Third Precinct burned, the world trembled. The sacking of the Minneapolis police station by unarmed demonstrators last week was an unprecedented act of resistance. Never in living memory have the masses of oppressed people in the U.S. struck such a devastating blow against the ruling class and their police guard dogs. 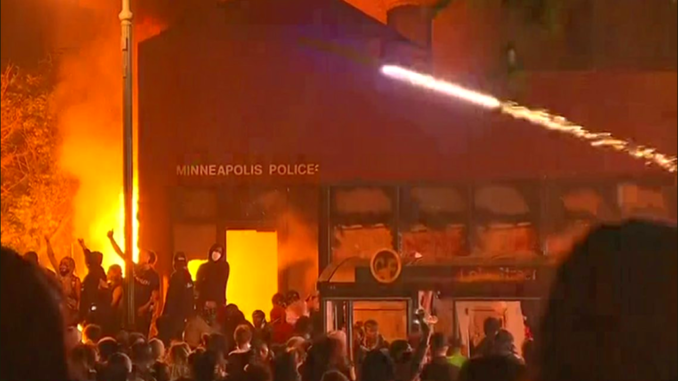 This rebellion, which began in Minneapolis following the horrific murder of George Floyd and quickly spread across the country, has taken the battle to the doorstep of the state’s oppressing army. The masses have made clear who their enemy is; they have struck righteously at the police and the corporate powers whom they serve. They have resisted police violence with collective strength and retaken the products of their labor from the outposts of capital where stolen profits were so long hoarded.

The character of the rebellion is clear to all who look. It’s focus on the brutality of racist policing shows that it is Black led. The masses of non-Black people of color and white demonstrators who surged forth to join the uprising shows that the movement is multinational. And the total defiance of the demonstrators toward police and corporations shows that the movement is solidly anticapitalist.

These are the makings of a revolutionary uprising. In the U.S., any successful revolutionary movement must be anticapitalist and it must understand the defining role that the oppression of Black people has played in our history and in capitalist wealth production. All those elements have fallen into place during the current rebellion.

Whether or not this movement will succeed is not a matter of fate. The outcome will not be determined by luck or chance. Nor is it in the hands of the ruling class. With the deterioration of the capitalist state, the U.S. lacks the power to crush a movement of sufficient strength. There is only one question which will determine whether or not this movement makes the decisive transition from rebellion to revolution: Will revolutionary socialists rise to the challenge of organizing the masses?

The primary responsibility of revolutionary socialists during a national uprising is to immerse themselves in the masses, to engage in deep organizing, to develop the organizational spine which allows the movement to weather the trials of state repression. Spontaneous uprisings have a short lifespan. Only an organized revolution can defeat the capitalist ruling class.

Revolutionary theory and history also provide a model and a path to victory, giving the working class the confidence they can succeed. Despair and defeatism are the most dangerous threats during an uprising, and they can only be warded off by political education.

It is also critical for revolutionaries to organize the people into political bodies which practice proletarian democracy and democratic centralism. The history of socialist revolutions is the history of political base building. The working class must be organized into Workers’ Assemblies — highly structured political bodies that stand in opposition to the capitalist system. What the ruling class fears most is working-class communities banding together to determine their own destiny. In Russia, China, Korea, Cuba and Vietnam, the assemblies and councils of the working class were the engines which drove socialist revolution. This powerful revolutionary engine must be brought to the U.S.

Only when the masses are organized can true proletarian democracy be achieved. Only then can the Workers’ Assemblies of the masses provide the needed counterbalance against the capitalist dictatorship of the U.S. Such working-class organization will need to be organized under the principles of democratic centralism in order for all nationalities and special oppressions to be represented, and for those diverse views to be synthesized into united revolutionary action.

The ruling class will use any divisions among the working class to undermine and destroy the uprising. With a grasp of revolutionary theory, and practicing democratic centralism, revolutionary socialists can assist the masses in navigating their internal contradictions. Organization is the only means of preventing the division and disintegration that so often occurs in diverse multinational movements under attack from capitalism.

Be decisive, be strategic

Revolutionaries must also ensure that their action, no matter how rapid, is in strict accordance with a clear strategy. Diffuse and dispersed action squanders the energy of revolutionaries and hampers unified action. Without a clear strategy, revolutionaries, and the movement at large, cannot seize opportunities as they emerge, exploit divisions within the ruling class or effectively respond to setbacks.

Do not abandon the people

The people who are most in need of political organization are the most oppressed. Decade after decade, Black people have had their movements and organizations smashed by the bosses, the police and the federal government. The capitalist ruling class has made the destruction of Black political organizations — whether they be radical groups like the Black Panthers or within the mainstream union movement — their first priority. Revolutionary socialists who claim to stand in solidarity with the Black working class must labor diligently to organize oppressed communities. You cannot claim to support Black lives if you don’t organize Black people to withstand deadly state repression. If you stand on the sidelines during an uprising and shout your support, you are only encouraging other people to go out and die. “Defending the people” means organizing the people.

This also means organizing the unorganized. For decades, the U.S. left has been primarily concerned with mobilizing other activists — the most politically conscious members of the working class. Revolutionary socialists must dig their roots far deeper into the working class. A true mass movement must be composed of the masses. It is more difficult to organize those who have never participated in political action — and also more necessary. During a time of national upheaval, revolutionaries do not have the privilege of shirking their duty to organize.

Revolutionary socialists must move immediately to immerse themselves in the working class. The people are already in motion, and they will gravitate to those who are committed to helping them build working-class power. Organize the people around the struggle — both national and local. Develop Workers’ Assemblies to facilitate the people’s struggle against police violence, bosses and landlords.

This is the only way to win, the only path to victory, the only road to socialism.