This is big. Seemingly out of nowhere, the “silent majority” of the working class took to the streets in towns and cities across the land — in a time of COVID-19 lockdowns and state-ordered disruption of normal human interactions — to condemn the police lynching of George Floyd in Minneapolis. 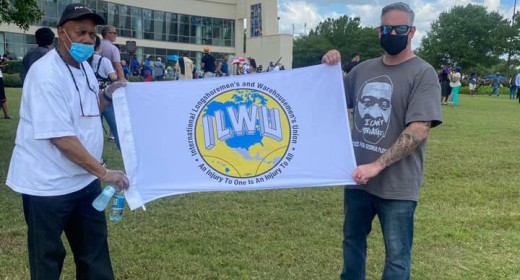 Organized labor didn’t lead it, but it did join in this historic, largely spontaneous movement against police impunity and the entrenched system of white supremacy that lies behind it.

Longshore unions plan to shut down West, East and Gulf Coast ports on June 9 — stopping work for 8 minutes and 46 seconds, the duration of Floyd’s streetside, slow-motion execution at the hands of Minneapolis police.

“We’re living in a recurring nightmare in America,” said the California Labor Federation in a June 4 statement. “Over the past few weeks we’ve seen the senseless killings of Ahmaud Arbery, Breonna Taylor, David McAtee, Tony McDade and George Floyd. And for centuries, our brothers and sisters have been murdered for no other reason than the color of their skin.

“Every time a Black person is brutalized by the police, individuals and organizations condemn it. When racism leads to a modern-day lynching, we express shock. But these scenes repeat, over and over. We’re on a vicious loop that ignores the desperate need for change and cements the systemic racism that’s plagued our nation since its founding.”

The California labor statement called for ending the school-to-prison pipeline by creating decent jobs and “zero tolerance of police officers who commit any acts of violence against our communities.”

“A once-in-a-generation call to action”

On the same day, four Bay Area central labor councils, representing half a million working families, issued a joint statement entitled, “Unions must help lead the fight for racial justice.” The statement asked, “What type of society do we want for our grandchildren? Do we want more schoolhouses or more jails? More teachers or more police?

“This is a once-in-a-generation call to action. The fight for racial justice is our fight.”

It’s no secret that the mainstream of organized labor has been slow to act against white supremacy and police violence. You could say this has been an “Achilles heel” of the unions — an obstacle to uniting with the great mass of unorganized workers, the gig workers, the migrants and farmworkers, including members of oppressed nations and nationalities within the borders of the United States. We’re talking about uniting the most numerous and essential class of all, the working class, without whom no commodity would be produced and no service would be performed.

One thing the murders of George Floyd and the others have illuminated for all to see is, first of all, how brutal and corrupt is the system of the exploiters and oppressors and, second of all, how quickly and powerfully the many sectors of the working class can spring into united action to confront them.

Welsh is a retired letter carrier with the U.S. Postal Service and a current delegate to the San Francisco Labor Council.