June 2 — Throughout the U.S., people have been both very afraid and outraged by what is happening at this moment of crisis — whether it’s the economic instability of capitalism that COVID-19 has exposed or the recent rise in police violence against Black lives. Then, on May 25, police killed George Floyd in Minneapolis, and later David McAtee in Louisville, Ky., and people were hit with a tidal wave of grief, sadness and righteous anger. 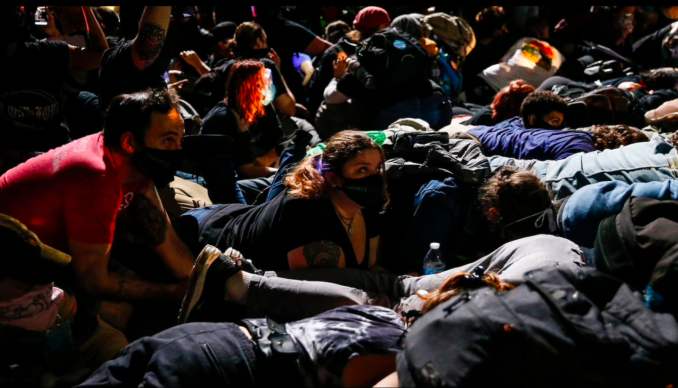 Decades of struggle: Dallas-Fort Worth pushes back racism

Here in Texas, there has been a massive pushback against injustice through protests and outright rebellion against the police state and acts of repression by the police. Dallas-Fort Worth has shown solidarity with those most affected in this struggle and been a hotspot for political action and outrage.

On Monday, June 1, protesters marched in response to the wrongful death of George Floyd and were met with opposition by the Dallas Police Department. The protest was dispersed by police officers for “violating a curfew” imposed by Police Chief Renee Hall. Although most protesters were not arrested, nearly 200 participants were temporarily detained and bused back to the group’s original meeting place, a courthouse just outside the curfew zone. Three protesters were arrested close to the Dallas main police station for violating the curfew.

Police repression in DFW is ramping up in response to public outrage against racism and police brutality, as it becomes increasingly clear that the curfew was not imposed for the safety of the people of Dallas. Instead the curfew is designed to silence those who wish to speak out against unjust police violence.

This is not the first time the people of DFW have participated in public action against economic and social injustice, and it is far from the last. After the murder of Botham Jean by ex-Dallas cop Amber Guyger in September 2018, people mobilized en masse to express their anger with the current racist state of affairs and demand justice for those who had been killed by police officers.

During the struggle against South African apartheid in the late 1980s, Black Dallas activists mobilized to oppose a day honoring that country then ruled by white supremacists. During the Civil Rights Movement, Black activists in Dallas fought hard for the desegregation of Fair Park and the Texas State Fair. One leader was Juanita Craft, a sponsor of the local NAACP Youth Chapter who led the State Fair protests in 1955.

The DFW area has been an important part of the political history of the struggle for social justice in the U.S. Now the multinational youth of Dallas-Fort Worth are becoming even more conscious and radicalized by the world struggles around them. Dallas-Fort Worth, a huge metropolitan area of 7.6 million people in 2019, is developing as a strong center of revolutionary ideas and a vital part of a revolutionary movement fighting to bring justice to workers and oppressed people around the globe.

Whenever there is oppression, the growing DFW movement can be counted on to show solidarity with those trapped under the heel of capitalist injustice. To the workers and marginalized people of Dallas-Fort Worth, Black lives do, and always will, matter.