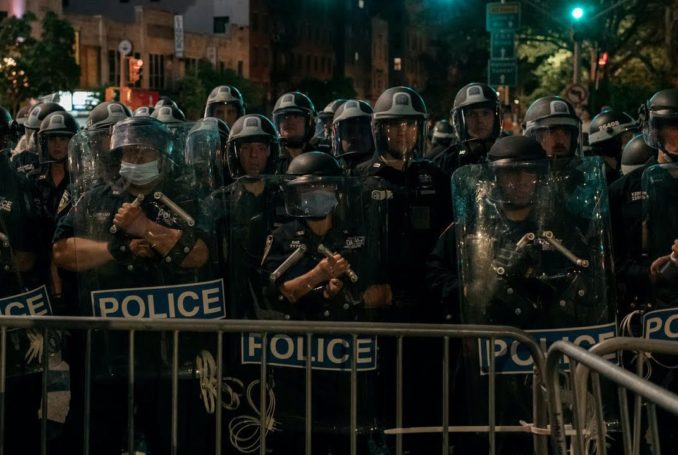 A statement of the Prisoner Solidarity Committee of Workers World Party

June 10 – Since this statement/petition was drafted, those arrested in the New York City George Floyd protests have been released. But messages to Mayor de Blasio should continue because the practice of NYPD violence continues, with mass arrests and detention of protesters for hours and days, in violation of New York City’s own laws. We continue to demand: Abolish the Police!

Jails and migrant detention centers, along with nursing homes and meatpacking plants, rank as the worst settings for the spread of coronavirus. The New York Police Department has not only been arresting thousands of antiracist protesters and illegally violating the city’s new arrest-and-release law; it is also keeping arrestees for longer than 24 hours and taking their masks away.

A New York judge just rubber-stamped that threat to public health, ruling it was okay to keep protesters in jail after they’ve been beaten and brutalized.

According to Section 150.20 of New York City’s criminal procedure law, the NYPD should not even be arresting one person. The movement against the city’s racist stop-and-frisk program won the concession and small legal gain that protesters and people stopped by the police should be issued a summons at the scene, with a date to attend court.

The police continue to violate this procedure.

The NYPD’s budget for 2019 was $6 billion. It is the largest and most expensive police force in the U.S. The NYPD budget is larger than the gross national product of many countries. This is money stolen from vulnerable communities, the same communities that are most impacted by police violence and structural racism. It is the seventh largest army in the world, and it is in flagrant violation of New York City’s own laws.

Any form of arrest, one of the main vectors in the pandemic of racism, should be off-limits to the NYPD. The oppressive response to the protests by the white supremacist system of incarceration has amply demonstrated it has no authority to criminalize protest in any way.

The Prisoners Solidarity Committee of Workers World Party demands that all protesters, along with all other inmates in the city’s racist incarceration system, be immediately and unconditionally released.

Racist killer cops walk free. The Wall Street gamblers that destroy people’s homes never see a day in jail. Trump separates migrant families at the border and puts thousands in camps. At meatpacking plants and other factories executives can reap profits while demanding that migrant workers show up at work, setting off hundreds of infections.

None of these criminals spend a second in jail — while the U.S. has the highest incarceration rate in the world. U.S. jails overflow with Black and Brown prisoners, their lives destroyed by what Michelle Alexander has called “the New Jim Crow.”

This day-in and day-out reality is just one part of the racist oppression bred by capitalism. Along with skyrocketing unemployment and the devastating effects of COVID-19, mass incarceration has fueled the powerful protests, ignited by the horrific murders of George Floyd, Breonna Taylor and Ahmaud Arbery.

In response to these justified protests, liberal Mayor Bill de Blasio has unleashed a bloody cop riot in the streets of New York, targeting not just protesters but also anyone who happens to be in the way, including “essential” workers.

– Entrapped them with fake information, cabs and kettling

Teargas victims are jailed begging for water. Many of those released show signs of being beaten. Facemasks are confiscated, while precinct cops themselves refuse to wear them.

New York City, the center of world capitalism and home to world-looting Wall Street, is also the epicenter of the COVID-19 virus. As Governor Cuomo reopens New York to safeguard the profits of the rich, the NYPD’s racist brutality can be a death sentence for thousands of righteous protesters. This can lead to a second wave of contagion.

The inspiring, dynamic protests against white supremacy are showing what’s possible when the people are united. The massive New York City protests have broken the ability of the police to enforce the curfew, which was canceled this weekend.

Police unions are not unions to protect workers. They are crime syndicates, criminal cabals. Their racist power structure must be rooted out.

Los Angeles Mayor Eric Garcetti announced this week that upwards of $150 million will be cut from the Los Angeles Police Department budget and given to communities of color. This amount is about 8 percent of the LAPD’s outsized $1.8 billion budget.

Nine members of the Minneapolis City Council on Sunday, June 7, announced they intend to defund and dismantle the city’s police department following the police killing of George Floyd. “We committed to dismantling policing as we know it in the city of Minneapolis and to rebuild with our community a new model of public safety that actually keeps our community safe,” Council President Lisa Bender told CNN.  With nine votes the City Council has a veto-proof supermajority of the council’s 13 members, Bender said

All these concessions show that it’s the right time for the movement to up the ante — and make even bolder demands. Abolish the police!

What we are fighting for:

Dismantle the Racist Incarceration System, All Jails and the New Jim Crow!

Defund the Police and Use the Money for Jobs, Housing, Schools and Health care!

Shut Down Capitalism and Build Socialism.