The following remarks were prepared for a rally at LOVE Park in Philadelphia on June 4.

My name is Susan Abulhawa, from Workers World Party, and I bring revolutionary greetings and solidarity from Palestine, where Palestinians have been marching in the streets of Jerusalem, Ramallah, Haifa, Gaza and beyond in support of Black lives over the past few days. I am here not as an ally, but as your comrade in arms, as your comrade in struggle. 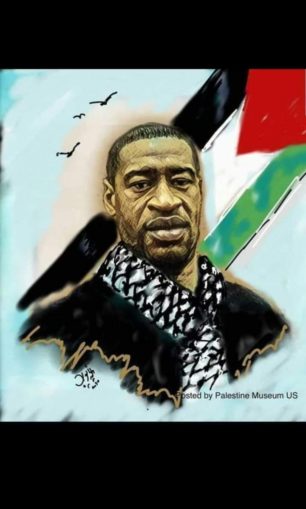 We also need to acknowledge that the owners of the store that called the cops on George Floyd are Palestinian. That is not something our community will ignore. It’s something to be ashamed of.

It needs to be said, repeated and understood, that minorities in this country — including Brown immigrants like myself and that store owner and other minorities — are afforded rights and protections by law, not because white men in power so generously gave them to us; and not because we ourselves fought for them, but because Black people took to the streets to demand equal rights for all.

I have been robbed of everything my ancestors built in Palestine for 2,000 years, and I have been forced to live my life in exile, banned from my homeland, away from my culture, my language and my history because foreign colonizers with big guns and a lot of money decided I was not the right kind of human being to inherit my heritage.

But I will not say that I know what it’s like to be excluded wholesale the way Black people in this country are because that would be a lie. I am still afforded some privileges that Black people are denied, even though I have those privileges because of the struggle of Black people.

Linked by oppression and solidarity

Everyday in Palestine there is a Palestinian somewhere with an Israeli soldier’s knee on his neck. Every moment in Palestine there is a Palestinian being stopped, checked, frisked, humiliated, arrested, beaten or shot. We can say that we know what it’s like, and to some extent that is true. But we’ve not been terrorized for 400 years. Our ancestors weren’t kidnapped from their villages and flung across the world into unspeakable bondage that has only just changed form, but not truly ended.

That is why I’m here. I’m here because I am forever bound to Black America by love, pain, gratitude and a shared revolutionary history that goes back to times before I was born. You inspire us and you inspire the world. Your struggle is bringing people pouring into their streets all over the world.

The masses are hungry for revolution. Everywhere in every corner. We are tired of the colonizers, the 1% who get their wealth by looting the hell out of all of us. The billionaires who got their money by bombing and destroying every country they couldn’t control with puppet regimes.

This is our time to stand together for a real revolution. This is no longer about charging the cops or even convicting them. This is about the fact that working-class families don’t have decent schools for their children. That getting a college education means you will spend the rest of your natural life paying interest to banks.

It’s about being away from your babies to work three jobs and still not being able to pay your bills. It’s about your zip code or the color of your skin dictating your destiny no matter what potential or gifts you are born with.

It’s about the fact that there is now a trillionaire in the world, whose extraordinary wealth was gained off the backs of underpaid, exploited or outright enslaved labor, not to mention the destruction of nonhuman life and planet alike.

It’s about the masses not being able to live simple, dignified lives while the ruling class has the ability to give $1 trillion per day to prop up Wall Street during the pandemic.

This is a moment that will not come again exactly the same, and we intend to seize it to create a better world. The U.S. government and Israel have been exporting death, surveillance and looting all over the world. In fact, the tactic of suffocating with a choke hold or a knee to the neck comes precisely from Israeli military training of U.S. police forces, including in Minneapolis.

Together we will export revolution. We will export our love and solidarity for the downtrodden everywhere — our solidarity to everyone willing to take to the streets to demand a more just world, a better world, a more equitable world.

If nothing else, this moment proves that the only real power we have as ordinary people is in the streets. It took just two weeks of us being out here for them to finally remove that damn Rizzo statue. We don’t have power in their courts; they’re rigged. We don’t have power through their ballots; those are rigged, too. They’re giving us a choice of which racist, capitalist motherfucker to vote for as president. We have a third choice, and it’s right here. In the streets.