Monica Moorehead delivered this talk as a panelist on a June 4 Workers World Party webinar “It is right to rebel against police terror.”

This rebellion has not only swept the U.S. but is electrifying the entire world, from Palestine to France to Iran to Africa.  Every global sector of society has been impacted because imperialism exists both at home and abroad. Millions of people around the globe are literally sacrificing their health during the pandemic to be in the streets to demand justice for George Floyd and to say “Black Lives Matter.” 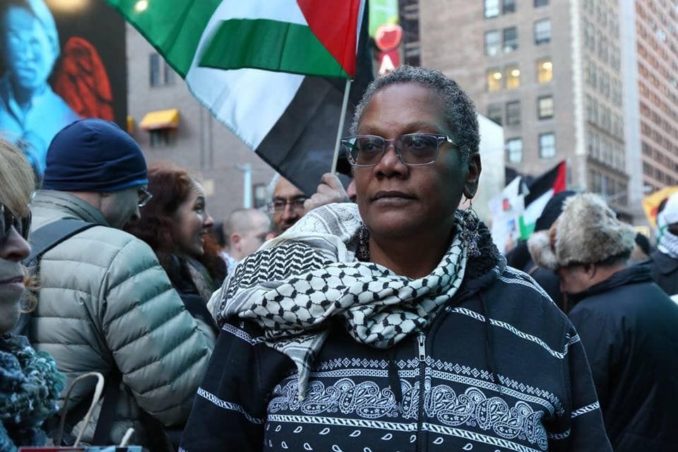 There was a homemade sign in a LA protest that read, “Racism is a pandemic.” It is a good reminder that the institutionalized racism and the pandemic have one thing in common, and that is the capitalist system and the deepening crisis it has been slowly drowning in since 2008.

Our party has been predicting since the 2008 economic crisis that capitalism is coming to a dead end.  It is just a matter of time how slow or how swift it will happen.  What developments would precipitate its inevitable demise? We are beginning to see that demise first with the pandemic and now this global rebellion, with the U.S. being ground zero.

Many of us of an older generation witnessed heroic rebellions in the 1960s, 1990s and even most recently in 2014 in Ferguson, Mo., following the killing of Michael Brown. But most of these rebellions were relegated within the confines of the Black and Brown communities which the police and military occupied outright, as if they were colonized peoples — just like in Palestine or Iraq.

What we are seeing today is a rebellion of a wholly different character, especially its multinational character. While the Black Lives Matter has a major voice, Black, Brown, white and Indigenous youth dominate the numbers, which help make support for this rebellion so widespread, along with social media.

Yes, this rebellion was definitely sparked by the torture and lynching of George Floyd, but the anger and frustration had been percolating below the surface for a long time, including the recent murders of Armaud Abery, Breonna Taylor, Tony McDade and others.

Just think about this:  A recent poll was taken where 54 percent of those polled approved of the torching of the Minnesota police precinct on May 28 —  54 percent!!!  This all shows how developments can rapidly change everything in an instant, including consciousness.

The billionaire ruling class, their Wall Street investors and the Trump government are so nervous, knowing that their entire system is under attack for ignoring all the early signs of the pandemic, the lack of testing and health care for everyone, including essential workers; food shortages; evictions; and now the unemployment rate, which is approaching Great Depression levels of 25 percent — not counting 2 million incarcerated workers in prisons and detention centers, undocumented migrant workers and working-class and oppressed youth.

But as we have all seen, workers are fighting back with strikes, sit-ins, car caravans and even resisting the armed neo-fascists who want to reopen businesses.

In every instance where there is a rebellion, no matter the catalyst, the merging of national oppression and class oppression becomes acute.  People of color in large disproportionate numbers have always endured cyclical poverty, resulting in an occupying police force where people like George Floyd are viewed as being less than human. When you live under a system of haves and have-nots, a rebellion of resistance will break out.

Remember all the countless slave uprisings against the slavocracy before the Civil War that were labeled as being illegal and violent by the oppressor?  Well, this is an uprising today against another form of oppression where the words “looting,” “violence” and “vandalism” of property are triggering words meant to divide the workers by nationality and class and by demonizing the rebellion.  As Dr. King implied, a “riot is the expression of the unheard” — until a no-business-as-usual social upheaval is heard.

During Hurricane Katrina in New Orleans in 2005, so many Black people were left to drown, especially in the Ninth Ward, and were used as target practice by armed, white neo-fascists when they desperately tried to escape to the white parishes outside of New Orleans.

When people of color expropriated essentials like food, diapers, etc., they were shot on sight or arrested by the police to safeguard the private property of the super-rich. A system that is set up for the rich to get super-rich, while the poor get super-poor, gets exposed when a catastrophe like Katrina happens or an uprising against an oppressive system by any means necessary.

Targeting property is a feature of any uprising.  There is no comparison between youth taking shoes, food and clothes, and Wall Street bankers and corporate bosses collectively stealing hundreds of billions of dollars from U.S. taxpayers in the form of emergency and pension funds, military budgets or bailouts. George Floyd lost his life over a fraudulent $20 bill. That is what his life was worth.

Wall Street is the real looter of workers’ wealth — of billions of dollars every day —  including the measly $1,200 stimulus checks which some people still haven’t received.

The ruling class’s worst nightmare is when sustained rebellions break out.  Why?  Because it is a threat to capitalist peace and stability — that is, the rule of the minority over the majority. Calling out the military against the masses is the last resort for the bosses who fear a socialist revolution. This fear is reflected in the internal split between Trump and the Department of Defense over the military force used to attack protesters this past Monday for his photo-op.

This split is a good thing for the movement, and hopefully the rebellion will help widen the schisms. The very presence of the police and military incites resistance and anger.  The very presence of wealth when so many millions go without incites expropriation whenever the opportunity arises.

The only solution to these class antagonisms is social revolution, which we are seeing hopeful signs of now.  Now all we need is organization and leadership, like workers’ assemblies, to assist the masses in realizing its historic conclusion here and worldwide.

Moorehead is a managing editor of Workers World newspaper as well as editor and contributing writer to the pamphlet “Marxism, Reparations and the Black Freedom Struggle.”