June 5 — Four days ago, the White House called on the U.S. military to deploy in U.S. cities to “dominate” the streets. Over the next three days, two former chairs of the Joint Chiefs of Staff spoke out against this deployment. So did Trump’s own former and current secretaries of defense, the latter knowing it would likely get him fired. 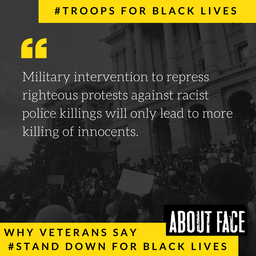 Reacting to Trump’s threat, at least three organizations of anti-war military veterans called on service members from the U.S. Armed Forces or the National Guard to refuse to deploy against demonstrators opposing racism.

While the president stopped broadcasting his threats, and some National Guard and federal troops have been called back, they may still be used against the civilian population. The tumult within the military apparatus over Trump’s threat raises two key questions: Where does this opposition come from? What does the generals’ reluctance mean for the anti-racist movement?

To answer the first: The generals and admirals fear that using military force against the African-American community and its allies could wreck whatever cohesion exists within the U.S. Armed Forces. The Pentagon has built a professional — that is, a nonconscript — military over the last 45 years since the debacle in Vietnam. The use of troops — who are 40 percent or more people of color — against the civilian population could destroy its morale and boomerang against the brass.

The generals’ reluctance indicates the possibility for the movement to reach out to the rank-and-file soldiers. Weakening the morale of the U.S. Armed Forces means weakening the worldwide grip of U.S.-based monopolies and banks. This would be a step forward for the people of the U.S. and the world.

Secretary of Defense Mark Esper, who was rumored to already be on his way out, openly contradicted Trump on June 4. “The option to use active duty forces in a law enforcement role should only be used as a matter of last resort,” he said, “and only in the most urgent and dire of situations. We are not in one of those situations now. I do not support invoking the Insurrection Act” of 1807. (CNN)

Esper, normally a Trump toady, would speak out like that only if he already was under pressure from the military hierarchy to stop the use of U.S. troops in the cities. Retired top officers, who speak more freely on political questions than active officers, gave further proof of this. These included former JCS chairs Admiral Mike Muller and Gen. Martin Dempsey, as well as former Secretary of Defense James Mattis, all of whom ravaged Trump.

No one should mistake these military officers’ motives. They have spent their lives serving the interests of U.S. militarism and imperialism. They have ordered troops into illegal wars and occupations against Yugoslavia, Iraq, Afghanistan and Syria and threatened Iran and Venezuela. This time they believe that Trump’s orders to deploy federal troops against anti-racist protesters threaten their military.

The organization of antiwar veterans About Face: Veterans Against the War has circulated a petition aimed at National Guard members that reads: “We ask that you stand up for Black lives by standing down. We know the consequences you may face for disobeying orders. Many of us have faced them ourselves.” As of June 4, some 700 veterans had signed this call to refuse duty. (tinyurl.com/y9xkxxnc)

Veterans For Peace, another such organization, circulated a statement calling on “all military leaders and personnel to refuse deployment. We, as veterans, know the terrible aftermath of participating in actions that are morally wrong against communities in other countries. Now is the time to refuse to participate in orders that are unjust.” (veteransforpeace.org)

Courage to Resist reports in a June 4 article that it is already “currently assisting members of the National Guard who resisted Trump’s orders to violently attack people on the streets of Washington, D.C., peacefully and lawfully protesting racial injustice.

“One Guardsman who is resisting Trump’s orders originally hoped to join medical missions assisting in natural disasters. Addressing the current situation he says, ‘I can’t do it. Even looking at my uniform is making me feel sick that I’m associated with this, especially after [a National Guard unit] shot that man who owned that barbecue shop’” in Louisville, Ky. (couragetoresist.org)

No one can predict for certain how soldiers under discipline will react to the president’s orders. That there is dissent at the top and that there is already resistance from individual rank-and-file service members is a sign that resistance is possible, even within a “professional,” nonconscript army.

Consider the African revolutionary leader, Amilcar Cabral, when dealing with a similar challenge. Cabral was the head of the organization that directed the liberation war against Portuguese colonialism in Guinea-Bissau and Cape Verde.

In 1963, despite his enormous tasks in building a guerrilla movement and governing parts of his country, Cabral took time to write an appeal to the Portuguese conscript soldiers and officers who were occupying Guinea-Bissau.

His message, carefully explained, can be summarized as: (1) Those Portuguese troops who continue to fight Africans in the interest of the imperialist corporations can expect to never leave Africa alive. (2) Those who desert or resist will get the full support and protection of the liberation movement.

It took another 11 years of fighting, but the war-weary Portuguese military finally revolted against Portugal’s fascist government, overthrowing it and ending the wars against the African colonies of Angola, Mozambique and Guinea-Bissau.

While it is hard to predict what will happen next in the U.S., the events of the past weeks show that nothing is impossible. A movement that encourages and defends soldiers who resist and appeals to the troops, even as it challenges them, can make a difference.

Catalinotto is author of “Turn the Guns Around: Mutinies, Soldier Revolts and Revolutions,” World View Forum, 2017. The book’s appendix contains an English translation of Cabral’s 1963 appeal to Portuguese troops.