Who are the real looters?

They wear elegant business suits, not hoodies or jeans. They dine at fancy restaurants, not hotdog stands. They hang out in boardrooms, not on street corners. 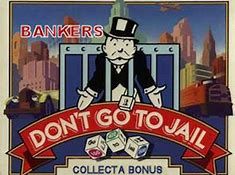 Bankers Get Out of Jail Free Monopoly

They don’t rob banks. They ARE the banks.

They are the U.S. financiers who punish the poor by charging overdraft fees when a check bounces. They raked in $11.7 BILLION that way last year.

The people who were penalized the most were those with bank balances averaging less than $350. (New York Times, June 4) Sometimes, the banks racked up charges against these depositors even after their accounts had been closed.

But you don’t see cops rushing into the banks, guns drawn, to arrest the directors who are systematically robbing poor people. Of course, the really big moneymen, the ones who own the banks, wouldn’t be there anyway. They’re much too busy enjoying their wealth to do anything like work.

With so many tens of millions now jobless because of COVID-19, the money that banks get that way — by robbing the poor at their lowest moments — is expected to balloon this year as more checks bounce for lack of funds. Many, many people are living virtually on the edge; just paying a small bill can push them over. And, then, on top of being penniless, they’re faced with a bank fine.

And what about the many people who are too poor to have any money at all in a bank? Who can barely make it from paycheck to paycheck? Or have no paycheck at all because they can’t get any kind of job and must rely on food banks to stay alive?

It is cold consolation that, because they haven’t got anything that can be taken away, they can’t be robbed in this way by the banks.

Capitalism is working very well at what it is intended to do: make more money for those who already have money, the real looters of society. Those who do the real work of producing everything that is needed to stay alive get back barely enough to live themselves.

Capitalism can’t be reformed; that is its nature.

Like a deadly virus, it must be destroyed and replaced by a new social order — one that is run by and for the multinational, multigender working class. People are rising up right now against the uniformed thugs who carry out the orders of the silk-suit looters.

Most forceful in this magnificent coast-to-coast rebellion are those in our class who have been most beaten down by this oppressive, racist system.

Polls show that the majority of the population sympathize with the demonstrators. Looters in silk suits, look out! The day of reckoning for your squeezing every possible dollar out of the poor is coming.