This talk was jointly read at the June 4 Workers World Party webinar on “It is right to rebel against police terror.”

Before we begin, we just want to inform everyone that we will be discussing police and military violence and our experiences on the grounds in Boston thus far. 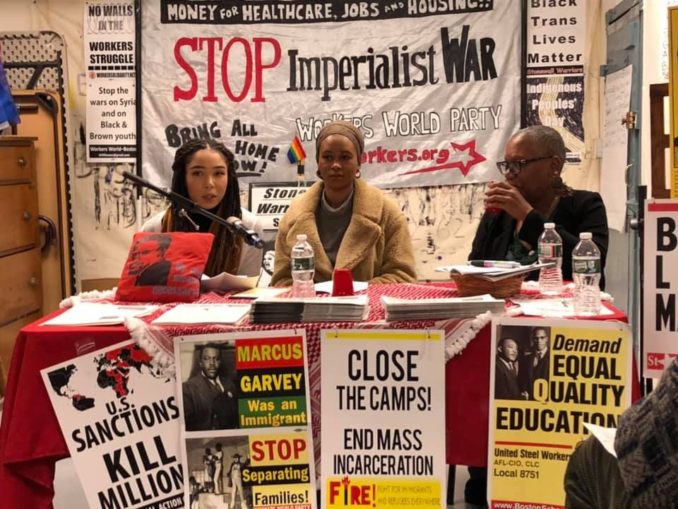 Ourselves, Greater Boston Marxist Association members, and volunteers have been on the ground not only in Boston, but around Greater Boston, nearly every day this week. Not only to attend the protests in solidarity, but to hand out care packages of protest supplies such as personal protective equipment, water/snacks and hand sanitizer.

While we have experienced unprecedented amounts of unity, demonstrations and solidarity efforts led by folks in all different facets of the communities — such as the demonstration led by a primarily Black youth group, “Black Boston,” Black Lives Matter March on Blue Hills Avenue and Mass Action Against Police Brutality March to Dudley Square — our members have also witnessed and experienced the violence and terror heightened and incited by the military and police.

During the Mass Action Against Police Brutality March on May 30 from Washington Street to Dudley Square Park across from the police stations, surveillance during this protest was extremely heavy — with police and journalists on the roof of the police station to take pictures of protests throughout the demonstration.

Protesters were showing solidarity by holding up signs for Black, Muslim and People of Color protesters throughout the demonstration, but journalists and police kept rotating surveillance on the roof.

Boston has been a heavy surveillance city for many years now, but specifically since the induction 2014-17; Boston along with Los Angeles and New York City were the first to implement the Common Vulnerabilities and Exposures pilot programs, PEACE Program (Promoting Engagement Acceptance & Community Empowerment) and other CVE-backed programs targeting primarily Black and Muslim youth in Boston, focusing solely on Islamic and Black “extremists.”

Many of the communities most impacted by military presence and police brutality are primarily Black and/or Muslim in Boston; they are also the primary organizers (specifically the May 31 protest) for many of these demonstrations and are in the most vulnerable of situations right now.

Protesters were initially met with force by the Boston Police Department in front of the state house on May 31 when at 9:30 p.m. hundreds of protesters were gathered in the street. Three police cruisers sped down the street at more than 60 miles per hour hoping to intimidate and possibly cause harm to us.

Shortly afterward, when we made an attempt to go home, it was quickly realized that the Massachusetts Bay Transportation Authority was shut down,  Trains were not making stops in areas that were in close proximity to downtown.

People began to grow fearful, as we had seen that the police had barricaded us within the downtown area, cutting off access to the side streets of Tremont, Boylston, Beacon and Park. With over a hundred people stuck in their positions, Boston police began to disperse tear gas into the crowd, beat protesters with their batons and mace them. Around 10:30 p.m., the National Guard began to arrive with heavily armed soldiers and tanks. Deploying even more tear gas, mace and,  this time, rubber bullets, soldiers and the police initiated much physical and mental harm to the protesters on the grounds that night.

While scouting the #Black Lives Matter Protest in Boston Common on June 3 to get a visual of the extent of the military and police presence, we witnessed that the police, not having enough manpower, called in officers from other areas of Massachusetts, including from Billerica, Malden, Newton and other local cities.

They called in the support of the National Guard, who are heavily armed and stationed on every corner within downtown Boston. While doing this, we came to realize incredibly quickly that many officers on the scene had covered their badge numbers with no incentive as to why. Although there was no physical violence at the hands of the police at this particular protest, there was a terrifying amount of military and cop surveillance taking place.

The fire of the revolutionary movement is taking place across the nation, being supported by our brothers, sisters and comrades abroad. Not only are they standing in solidarity with the Black Liberation movement, but are fighting on the ground alongside us, uplifting our voices and emphasizing the importance of the larger global struggle.

Nicolás Maduro, the president of Venezuela and a voice in the Bolivarian Revolution, recently said, “On behalf of the Venezuelan people, I express our solidarity with the family of George Floyd, the African-American community, and the American people who are fighting for equality and justice.”

A cry goes out from U.S. cities: “No more racism.” The movement and the people are making their voices heard.

Queen-Cheyenne is an organizer and educator based in Greater Boston. With a degree in sociology with a concentration in youth and community from Suffolk University, her work and interest center around frameworks of restorative justice, popular education, Islamic Liberation theology and Marxist theory. As co-lead organizer and co-founder of the Greater Boston Marxist Association, she dedicates her efforts to organizing solidarity work and community care.

Leighsandra Sheppard is a community organizer and educator based in the Massachusetts/Greater Boston area. Originally, Sheppard is from Lowell, Mass., a city located about 30 minutes north of Boston. She is co-founder and co-president of a newly founded local community organization, the Greater Boston Marxist Association, whose work is dedicated to efforts regarding community care, as well as the education and practice of Marxist-Leninist and Maoist theory.