Philadelphia city officials removed the hated Frank Rizzo statue, long the target of demonstrations against police brutality and white supremacy, during the night of June 3.

Rizzo was Philadelphia police commissioner from 1968 to 1971 and mayor from 1972 to 1980. In both roles, Rizzo targeted Black activists, including members of the Black Panther Party and MOVE, harassing, beating and arresting them.  The Philadelphia Inquirer published a Pulitzer Prize-winning expose in 1977, which revealed that rampant police brutality was covered up under the Rizzo administrations. 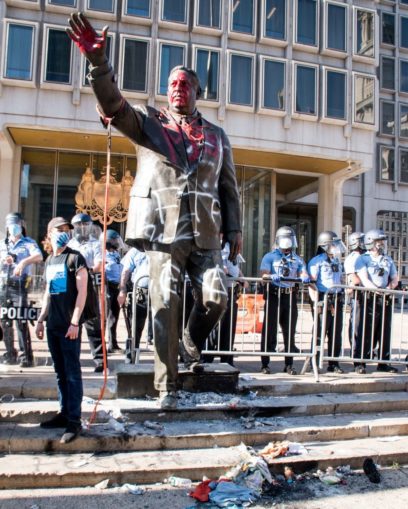 Rizzo’s statute, which was placed in a prominent spot near City Hall in 1988, has  been the subject of intense criticism. Many people object to the homage paid to a man whose bias against the Black, Latinx and LGBTQ2+ communities is well documented. The Philly Coalition for REAL (Racial, Economic and Legal) Justice initiated a petition to remove the statue in 2016.

On May 30, thousands of demonstrators, while calling for justice for George Floyd, surrounded the 10-foot-tall bronze statue and attempted to topple it.  As police stood around, demonstrators threw red paint on the statue and tried to set it on fire.

Philadelphia Mayor Jim Kenney had promised to take down the hated 3,000-pound statue, yet he repeatedly delayed carrying out his promise.  When Kenney made cleanup of the defaced statue a top priority the morning of May 31, it further fueled the decades-old campaign to have it removed.

Rizzo, the Black Panthers and Mumia

Below are excerpts from an article in Workers World newspaper, entitled, “Why Rizzo’s statue must come down,” written by Scott Williams. It was published on Aug. 24, 2017.

“Rizzo remains infamous for his record of dividing the working class with the poisons of racism and fascism. A precursor to Donald Trump’s authoritarian, male-chauvinist persona, Rizzo embodied white supremacist thuggery. Rizzo famously bragged in the 1960s of his growing police force of 9,000 cops as strong enough to ‘invade Cuba and win.’

“Technology eliminated millions of jobs across the U.S. and more were exported by globalization. Being ‘tough on crime’ became politically useful as a way to deal with the economy’s unemployed victims, many of whom were Black. Rizzo, a Democrat, was the icon of that racist, anti-worker movement, whose goal was more exploitation of the working class, including mass incarceration of the Black community and more police oppression.

“Some 3,500 students and allies had gathered at the School Board to demand a Black studies program in Philadelphia Public Schools. Rizzo unleashed the violent cops into the crowd, beating Black youth, school board officials and ministers.

“In 1966, Rizzo led raids on the Student Nonviolent Coordinating Committee, which he claimed had ‘hoards of dynamite, guns and ammunition.’ This proved to be false. In 1967, he would raid the offices and arrest leaders of the Revolutionary Action Movement and later the Students for a Democratic Society  based on false accusations of terrorism.

“Rizzo even said, ‘The Black Panthers should be strung up.’ He attempted to annihilate the radical left, especially the Black Panthers. In 1970, Rizzo led a raid on multiple Panther offices just a week before the major Revolutionary People’s Constitutional Convention met. Rizzo’s cops carried out a full public strip search of Panther members, which would be published on the front page of the next day’s Philadelphia Daily News.

“Rizzo had a tumultuous relationship with bourgeois and alternative media. Mumia Abu-Jamal, a prominent journalist and now political prisoner, consistently criticized Rizzo’s racist policies on public radio and in the press. To counter Mumia, Rizzo developed a police file on Mumia — over 800 pages long — of information gathered via wiretaps and other counterintelligence practices.

“Police spying on government critics became even more common. Rizzo’s police created a list of 18,000 activists to keep intelligence on, most of whom were Black radicals like Mumia. This racist harassment and anti-Mumia sentiment would remain the cause of Mumia’s incarceration to this day.

“Of course, one cannot mention Rizzo without mentioning his war against the Black Liberation organization MOVE. Rizzo brutalized MOVE, most notably in the 1978 showdown which raided the MOVE compound, leading to the arrest of the MOVE 9, who remain in prison to this day. [All were finally released by February 2020.]

“Although not in office in 1985, Rizzo can still be seen as guilty of helping to create the conditions of the MOVE bombing in May of that year. Philadelphia police dropped a bomb on the MOVE home, killing 11 members, including five children.

“Because bourgeois legality doesn’t consider racism a crime, Rizzo’s connection to corruption, not his racism, led to his downfall from the favor of the ruling class. Rizzo’s police were later found guilty of widespread extortion, racketeering, bribe-taking, illegal gambling and theft of over $400,000 worth of cocaine from drug sellers.”

Removing a statue is much easier than responding to calls for deep reforms in policing and the criminal justice system, especially at a time when many people are calling for defunding — and even abolishing the police. 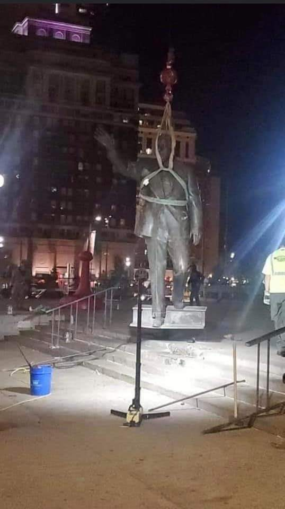 While many people are celebrating the removal of this hated symbol, the act of removing it now — in the midst of a growing movement intent on bringing down the system of racist terror and white supremacy it represented — may be a case of too little, too late.