COVID-19 continues to rage on as an international pandemic months after the initial outbreak in Wuhan, China.  Never to be outdone, the U.S. now has the most virus cases worldwide, with a staggering death toll of over 100,000 people.  This is despite the U.S. hoarding the lion’s share of the world’s resources. (New York Times, May 24) 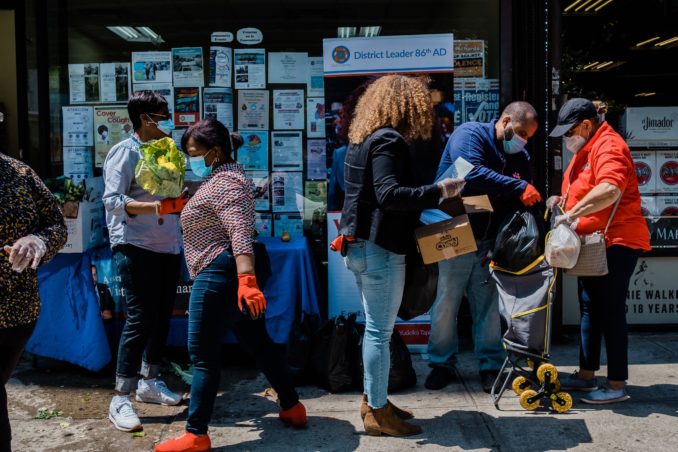 Food and mask distributions in the Bronx

The failure of the U.S. health care-industrial complex in handling this crisis cannot be understated, as the system is primarily geared to generating profits over saving human lives.  That has led to equipment and personnel shortages throughout the country.

Unsurprisingly, impoverished Black and Brown people have borne the most severe consequences of the epidemic, starved of resources and high-quality health care. Even in New York City, the financial heart of U.S. imperialism, Black and Brown communities have been hit the hardest.

Specifically, the situation in the Bronx is dire, as the borough is the COVID-19 capital of New York state. (Washington Post, April 21) Today the Bronx is burning, recalling the time when the South Bronx was in flames in the late 1970s when skylines were dominated by burned-out buildings and gray smoke.

The Bronx: by the numbers

The South and West Bronx make up the 15th Congressional District of New York, which ranks as not only the poorest district in New York state, but the poorest district in the U.S. In 2017, the median household income was estimated at $28,042, while its population was 97 percent people of color, reported Amanda Luz Henning Santiago on Dec. 15, 2019. (tinyurl.com/yckhnwm2)

The correlation is no coincidence, but serves as evidence of the oppression of low-income Black and Brown people. It’s no wonder that the most underserved community in the country is serving as COVID-19’s most efficient petri dish.

#Not62: The Bronx still last

The Bronx overall has an estimated median household income of $30,483, placing it last among all New York’s 62 counties. On the other hand, the Bronx takes first place for several chronic illnesses, including asthma, obesity, diabetes and hypertension.  Paradoxically, the Bronx’s largest industry is health care and social services with 146,062 employees as of 2018, according to Data USA.  (tinyurl.com/y8xbsuxj)

Despite the size of the Bronx health care workforce, health outcomes for Bronx residents are not improving, and social programs do little to offset the material conditions of these workers’ lives. However, there have been some efforts to change this situation, such as the #NOT62 Campaign launched in 2016.

The NYC Health Department explained it on March 16, 2016:  “The #NOT62 Campaign was launched last year by the Bronx Borough President’s Office, Montefiore Health System, the Institute for Family Health and the NYC  Health Department to improve strategic health outcomes for Bronx residents by 2020, by bringing together stakeholders from across multiple sectors within City government, the business community, health care providers and community-based/faith-based organizations to address the determinants of health.”

The campaign mainly carried out public outreach and health education in the Bronx’s most affected areas. As the data show, as of 2020, the campaign has unfortunately not achieved its desired result. While initiatives like this are certainly a step in the right direction, most are doomed to fail as the problems they are trying to rectify are systemic in this racist, capitalist society.

Material conditions for working-class “Bronxites” will not change until the systems of oppression put into place by the capitalist class are completely dismantled, and the workers can directly manage their community resources for the betterment of all.

However, many Bronx residents refuse to roll over as the coronavirus continues to spread, letting their voices ring out through their protective face masks. The Bronx health care workforce, in particular, has been protesting their poor working conditions as hospitals run out of personal protective equipment and are flooded  with new patients.

One demonstration by nurses and other medical professionals took place on March 28 at Jacobi Medical Center. Holding signs with slogans reading, “Will work for PPE,” they voiced their refusal to work without proper protection after the Centers for Disease Control and Prevention ordered them to reuse their masks.

The New York State Nurse Association held another rally there April 17, protesting a change in the hospital’s paid sick leave policy, which required staff to obtain a doctor’s note if they were out sick. And this in the midst of a pandemic! Health care workers led a demonstration and candlelight vigil for workers lost to COVID-19 outside Lincoln Hospital, painting a clear picture of the harrowing conditions that many Bronxites face today. (Guardian, April 15)

These are essential workers, risking life and limb on the front lines to provide for themselves and their families. Many do not have the luxury to work from home.  Combating the pandemic is their everyday reality and burden. They deserve more than thoughts, prayers and pats on the back from the medical-industrial complex that considers them disposable. Many Bronx residents have nowhere to go in the event they fall ill, as their caretakers continue to get sick while in the service of others.

Facing the ‘new normal’ in the Bronx

Adversity is nothing new in the Bronx. The borough’s residents carry on despite facing racist police terror and lacking high-quality food sources and accessible, adequate medical care.  Masks serve as the new fitted Yankee cap. The usually bustling bodegas are a little less crowded.

COVID-19 continues to spread in some of the most vulnerable neighborhoods in the borough — from the high risers of River Park Towers in the Morris Heights neighborhood, recently described as “death towers” by a resident, to New York City Housing Authority buildings in the South Bronx. (NY Times, May 26) Public health education programs can only do so much when faced with a massive shortage of PPE and COVID testing kits.

There is no going back to before the outbreak.  The dying capitalist machine continues to whir on, consuming lives to generate as much profit as it can before it finally goes kaput. The only option that Bronx residents have is to move forward, inevitably toward socialism, the system in which the working class’s humanity is valued.

Just as the fires of the 1970s led to the blooming of the hip-hop movement that soars from speakers internationally today, there is no doubt that the Bronx will survive this crisis.