May 29 — Today a combination car/pedestrian protest in downtown Cleveland called for the Cuyahoga County Jail to release more prisoners and end “inhumane treatment.” Similar actions have been taking place around Ohio, which has the highest COVID-19 prisoner death rate in the country. This demonstration was called by the Coalition to Stop the Inhumanity at the Cuyahoga County Jail. 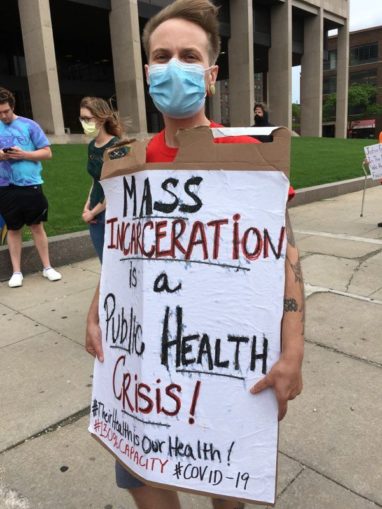 Prisoners banged on the bars as they looked down at a large group of people in solidarity. Dozens of cars, with taped-on messages of “Free them all” and “RIP George Tamir Desmond,” circled the “Justice Center.” Desmond Franklin and 12-year-old Tamir Rice were killed by Cleveland police — Rice in 2014 and Franklin this year. George is George Floyd.

Others stood outside the building, which houses the jail as well as the courts, and chanted, “Free them all” and “Hey, hey, ho, ho, Armand Budish has to go!”

County Executive Budish is responsible for the deplorable conditions at the county jail, which led to eight deaths in 2018 and another in 2019. An investigation by federal marshals found that prisoners faced inadequate food and sanitation, overcrowding, medical neglect and other mistreatment, including torture by guards. The jail held many because these prisoners could not afford bail.

In response, activists, prisoner family members and other concerned people in Cleveland formed the coalition in late 2018.

Since the pandemic, hundreds of prisoners have been released from the county jail, reducing overcrowding. However, the government provides no resources to survive outside jail and forces prisoners to pay over $200 a month for required ankle bracelets. Those left inside are still being mistreated.

As the coalition pointed out in a news release: “The Cuyahoga County Jail has completely mismanaged the pandemic for the incarcerated peoples at the jail. People who have tested positive for the virus have been put into solitary confinement without medical attention. There is no way for incarcerated people to social distance and there is a complete lack of personal protective equipment. The only way to keep incarcerated people and the rest of the community safe from COVID-19 is to release them without payment, prejudice, or opposition and provide them with the resources to live on the outside.”

Organizations plan more car/pedestrian combination protests in coming weeks in Columbus and outside the state prison in Belmont.