Immigrant workers, on strike against Washington state fruit packinghouses since May 7, won another victory on May 28. The workers’ negotiating committee came out from Allan Brothers with a signed agreement and their fists held high. 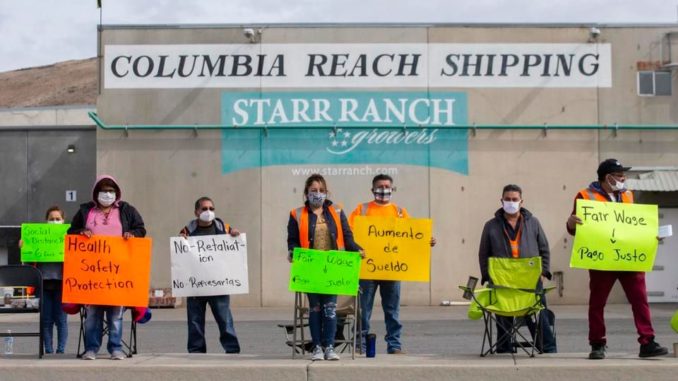 The Latinx workers in Yakima have won three signed agreements so far with the nonunion companies. The workers in Yakima Valley made their mark by joining a growing working-class movement for basic health and safety on the job and against racist disrespect by the bosses. The fruit packers are still striking two obstinate and racist bosses.

On May 26, the striking workers caravaned to Olympia, the state capitol. They went to Gov. Jay Inslee’s mansion and the state Department of Labor and Industries. They brought over 200 safety complaints against their bosses and demanded better standards from the state government.

Yakima County has the highest rate of COVID-19 cases on the West Coast. (tinyurl.com/y7e25htm) The agreement at Allan Brothers won increased safety measures in the crowded packinghouses and includes masks, plastic shields and a $1-an-hour raise. Negotiating committee member Agustin Lopez said, “I am very happy, because employees will go back to work with their heads held high and with a lot of pride.” (tinyurl.com/yddgtcdw)

On May 30, an 85-car solidarity caravan from the labor movement drove to the picket lines in Yakima from Seattle, the Tri-Cities and Spokane. Larry Brown, president of the Washington State Labor Council AFL-CIO, told strikers that unions have to fight against the murderous police racism of Minneapolis, while understanding that packinghouse workers are also part of the struggle against racism.

Since May Day, im/migrant workers, many considered essential, have protested against being completely excluded from the CARES Act. Passed by Congress and signed by Trump, this $2.2 trillion legislation doles out most of its funds to big business. But not one cent of the $1,200 checks or any unemployment compensation was given to undocumented workers!

Thousands more essential workers are now coming to Yakima for the cherry harvest and later the apple harvest. The packinghouse workers and their supporters have complained loudly to the government about lax safety in the agricultural industry.

State regulations allow for farmworkers to be double-bunked in rooms of up to 15 workers. Farmworkers are usually crammed tightly into vans when they are driven to the fields. COVID-19 spreads very easily under these conditions. At a farm in Tennessee, 100 percent of the 200 produce workers recently tested positive for COVID-19.

Solidarity with packinghouse workers needs to extend to farmworkers.