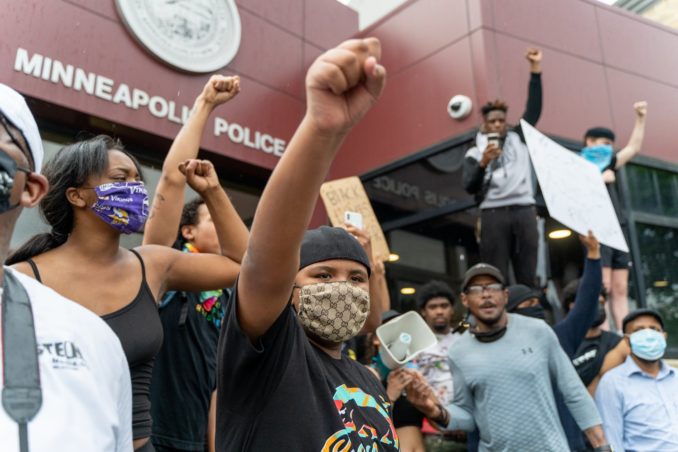 Protesters at the Minneapolis police department before being assaulted by cops, May 26.

May 27 – It was déjà vu, all over again. Another Black man captured on videotape, first, being tortured and, then, being choked to death by a white police officer.

It was almost six years ago when, on July 17, 2014, millions of people watched in horror when 43-year-old Eric Garner was put into a chokehold by a Staten Island, N.Y., white police officer. Garner could be heard saying, repeatedly, “I can’t breathe,” before he died of cardiac arrest.

From that tragic day until the summer of 2019, it took the New York Police Department five years to fire the murderous cop Daniel Pantaleo, who, up until that time, had been on “administrative leave” and still on the payroll.

A grand jury opted not to indict Pantaleo for first degree murder, but Ramsey Orta, a Puerto Rican bystander who videotaped the murder, has been imprisoned since 2016 — his punishment for exposing this heinous crime.

Fast forward to 2020, when on May 25, a 46-year-old Black man in Minneapolis George Floyd — known to his friends and co-workers as “Big Floyd” — was also choked to death by a white police officer, who pressed his knee into Floyd’s neck for nearly eight minutes while three other officers looked on. Floyd, who was handcuffed during the assault, was a close friend of former National Basketball Association player Steven Jackson.

This atrocity was captured on a 10-minute videotape by Darnella Frazier. Floyd could be heard echoing the words of Garner: “I can’t breathe.” He was also heard saying, “My stomach hurts. My neck hurts. Everything hurts. Give me some water or something. Please. Please.” (CNN, May 27)

His pleas were ignored until he lay motionless and was pronounced dead at Hennepin County Medical Center. Floyd had been accused of trying to pass a fake $20 bill at a convenience store.

The cop who killed Floyd, Derek Chauvin, and the other three cops with him were fired, but as of May 27 none of them have been arrested or charged with murder — a demand that Floyd’s family and many others have made publicly.

Once the video went viral on social media, hashtags #GeorgeFloyd and #GeorgeFloydwasmurdered became top trends on Twitter. Even when the mayor Jacob Frey announced the firing of the four officers, this did not prevent a multinational crowd of thousands, Black, Latinx, Indigenous and white, from taking to the streets of Minneapolis, despite ongoing concerns around social distancing.

Most of the protesters were wearing masks while chanting, “No justice, no peace,” “Jail killer cops,” “Abolish the police” and “Black Lives Matter.”   Parents even brought their masked children to the march.

This defiant act demonstrated how angry and passionately the people wanted to protest this murder, just as Black residents, wearing masks, took to the streets of New Brunswick, Ga., earlier this month over the February murder of Ahmaud Arbery by a white supremacist father and son.

Once the protesters reached the Third Precinct Headquarters, where the four cops were based, they carried out a mini-rebellion, slashing police car tires and breaking precinct windows.  The police retaliated by firing chemical irritants and rubber bullets. To relieve the excruciating pain, people ran into stores to get milk to douse on their stinging eyes. Despite the brutal assault by the police, the protest lasted for hours, until 9 p.m. when rain dispersed the crowd. 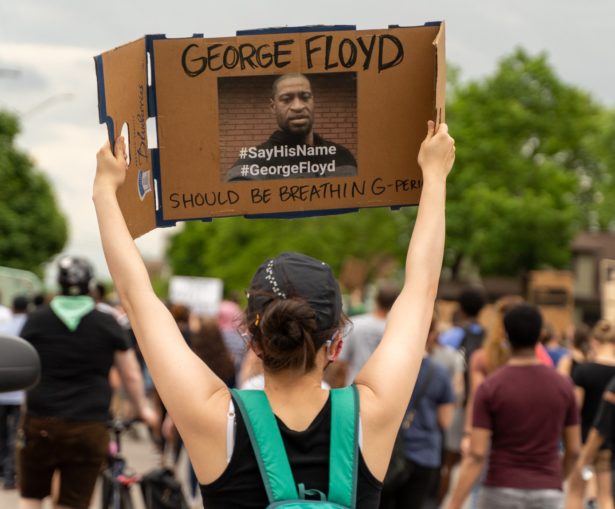 Why abolish the police?

When former San Francisco quarterback Colin Kaepernick took a knee during the playing of the national anthem in the 2016-17 football season, he was compelled to take this action following the police murders of Alton Sterling in Baton Rouge, La., and Philando Castile in a suburb of Saint Paul, Minn., the previous summer.

Since taking this heroic stance, Kaepernick has been “blackballed” by the National Football League owners and hierarchy. He has not taken another snap from center since the end of the 2017 season. Kaepernick was bringing worldwide attention not only to these two particular murders, also caught on video, but also to the rampant epidemic of police brutality and racist injustice — from racial profiling to outright killing of unarmed Black and Brown people, no matter their age, gender or disability.

That is why Kaepernick’s actions still resonate today whenever there is a police killing.

The police are not just armed individuals in uniform. They are a deadly force that is part of the repressive state apparatus, like the prisons, courts, military, etc., that exist above society’s laws to protect the interests of the tiny, super-rich clique that administers the profits of Wall Street.

These interests are diametrically opposed to the interests of the billions of workers and oppressed people, a global class who own nothing but are forced to struggle daily for the right to basic human needs to live and thrive — jobs, housing, health care, food, education and much more.

The ruling class depends on the extralegal arm of the state to defend their interests. This is why the police take a hands-off position toward armed neofascists demanding the reopening of businesses during the pandemic. But they are more than willing to attack unarmed protesters demanding justice for victims of police brutality — like Rodney King in 1991, Michael Brown in 2014 and George Floyd this week. People are more and more connecting these dots.

The police do not exist under capitalism to “protect and serve” the people. The police exist to protect and serve the private property of the ruling class by reinforcing, in a repressive manner, white supremacy from the top down, especially the disproportionate war against people of color.

The only real justice for the Eric Garners, Breonna Taylors and George Floyds of the world is to abolish the police. That can only come about with, first, the jailing of killer cops and, ultimately, the abolishment of capitalism through a socialist revolution that once and for all puts workers and oppressed people in power.