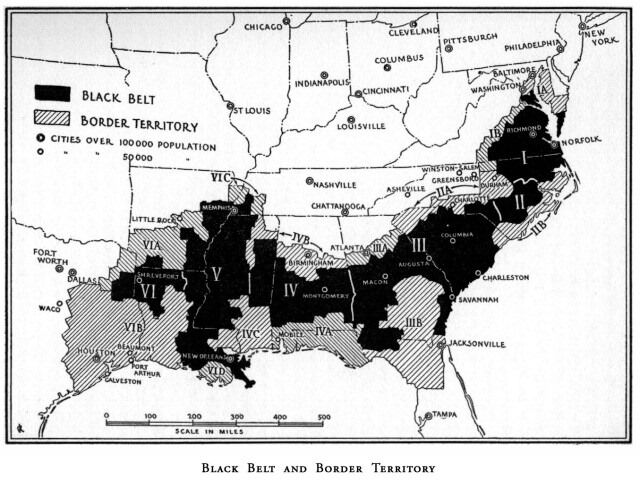 “Black communist James S. Allen included this map of the ‘Black Belt’ and adjoining plantation lands of the South in his 1938 ‘The Negro Question in the U.S.’”

And thanks to Workers World Party for continued solidarity and support for Strive, an anticapitalist, anti-imperialist transgender advocacy organization here.

This contradiction finds itself prevalent in many places. One of the most studied and yet under-researched places where the contradictions sit glaringly is the U.S. South.

Once the site of chattel enslavement of Africans, thought by many ahistorical revisionists and/or liberals to have been abolished by the great hand of Lincoln in 1865, the South still serves as a site of deeply rooted, continuing fascism. This functions through the slavery-by-another-name-of prisons; continued attacks on Black and Brown people through physical, economic and mental oppression and violence; and fascist arms of the state from the police to the Klan to the League of the South. The last often overlap much more than some people would like to admit: As the chant goes, “Cops and Klan Go Hand in Hand!”

The years from 1865 to 1877, following Lincoln’s Emancipation Proclamation, are known as Reconstruction. During this period, former slaves were supposedly given civil rights through three constitutional amendments. However, several loopholes in these amendments allowed the slavery of Black people to continue.

Additionally, during Reconstruction these legal gestures did nothing to stop the violence against Black workers by white supremacists still largely situated in the South as bosses and landlords. As freed Black people exercised their right to vote and to their own labor, the disenfranchised Confederate plantation owners mobilized the vigilante Ku Klux Klan, which murdered leaders seeking basic democratic rights, most of them Black people.

After Reconstruction, the first KKK had become generally inactive, but the effects of the anti-Black violence and fascism of its “White Terror” were felt throughout the South. In “Black Reconstruction,” W.E.B. DuBois said of this period: “The slave went free, stood a brief moment in the sun, then moved back toward slavery.” This happened through violence and legal maneuvers related to landlordism, prisons and capitalism.

Resistance to the KKK and fascism

During the period following Reconstruction, one of the earliest and most well-known struggles against white supremacy was the People’s Party. I specify after Reconstruction, so as not to downplay or erase the revolutionary slave revolts of African slaves during chattel slavery.

The People’s Party was born out of earlier populist-leaning parties in the South and in the U.S. Covered in detail by Workers World founding member Vince Copeland in his book, “Southern Populism & Black Labor,” the People’s Party was at first a coming together of Black farmers, white farmers and white laborers

However, the downfall and doom of the People’s Party, as Copeland points out, is that the party, despite expressing some unity between Black and white farmers, still had white-only leadership and did nothing at all for Black laborers. This brought about its eventual dissolution and absorption in the South by the reactionary Democratic Party.

The KKK regrouped in the early 1920s and led its largest campaign of violence against Black people yet. Though situated mainly in Alabama, Mississippi, Georgia, Louisiana and the Carolinas, this “second Klan” became an anti-immigrant, anti-Black, antiwoman national phenomenon. At its peak in Indiana, for instance, the governor, more than half the state legislature and about 30 percent of all “native-born” white men belonged to the Klan.

In the South, resistance to the second Klan took many forms. One of the most powerful was the Alabama Communist Party, which existed in the state from 1928 to 1951. The ACP was formed and led by Black laborers and sharecroppers, and fought back against Klan members, landlords and anti-Black labor practices. The dissolution of the ACP happened because of anti-communist McCarthy persecution, which affected the whole nation.

In yet another incarnation, the KKK still exists today primarily in the South and claims over 2,000 members. The members are not as obvious as they once were; they are bosses, law enforcement officers, soldiers in the imperialist U.S. military and landlords, among others.

This KKK is joined by many newer fascist groups that seem to routinely spring up down here in the South. They have been condoned, praised, promoted and used by U.S. and state governments. Besides public protest threats, these fascist groups also spew anti-Black, racist, homophobic, transphobic, xenophobic, woman-hating and other oppressive filth in mainstream and social media.

WWP in Pensacola has led opposition to a fascist presence here. And throughout the South, we continue to fight, with every intention of winning and crushing fascism, and thereby giving rise to a better, liberated world.

Cole (they/them), born and raised in Birmingham, Ala., connected to Workers World Party in 2016 and helped organize the WWP Pensacola branch. They are the president of Strive (Socialist Trans Initiative), a transgender advocacy organization and the only organization of its kind for nearly 200 miles.