These slightly edited remarks were given April 24 at the “U.S. Empire vs. Political Prisoners” webinar teach-in sponsored by Mobilization4Mumia and held in honor of the 66th birthday of political prisoner and revolutionary Mumia Abu-Jamal.

We are in Corona shock. The bourgeois order has become a prison. We are in what the International Monetary Fund calls the great lockdown — about 3 billion workers without enough work to survive. That’s about 81 percent of the global workforce; the workers will lose about $3.5 trillion in income. 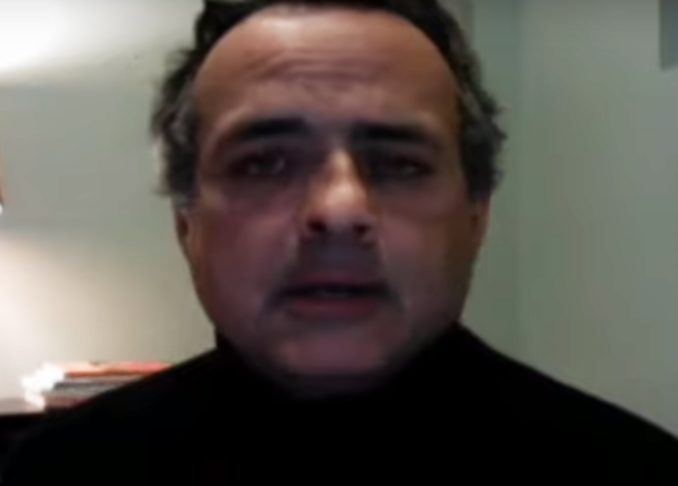 Vija Prashad during the teach-in.

Many families of the working class are already starving. The trauma is deep and cutting. The governments of the bourgeois order flail about their champions Trump and Bolsonaro, basing their decisions on the hallucinations of fantasy, rather than the cold, hard facts of science. The world is experiencing house arrest; the bourgeois order has turned its prisons into death chambers, where COVID-19 spreads as rapidly as on cruise ships. It has turned each home into a cell.

Meanwhile, in the socialist world, from China to Vietnam, from Kerala to Cuba, the communist movements have promoted public action and science-based policy and have used the full powers of the state to use reason, to design policies to isolate those who’ve been infected and to quarantine those who’ve been in touch with them. They’ve used humanitarian values to feed people and to hastily decommodify as many aspects of life as possible.

Neighborhood groups in China and cooperative movements in Kerala, people’s doctors in Cuba and community groups in Vietnam have shown that in these socialistic societies, the people are not treated as objects of the state and of the free market, but are confident and active, organized to participate when an emergency strikes society. A straight line has now been drawn between the project of the bourgeois order and the project of the socialist order, and the former for all its wealth has been found lacking in humanity.

On the 6th of April, Mumia wrote, “The COVID-19 shows us that the United States government is a weapon of mass incompetence. The U.S. government,” he said, “had months to prepare for the coming of the Coronavirus. They treated it lightly and nearly 1,000 deaths a day prove that the virus is indeed deadly serious.” What Mumia said then is totally accurate.

On the 31st of December 2019, George Gao, the head of China’s Centers for Disease Control and Prevention, informed the U.S. CDC about the lethality of the virus. A few days later, Gao spoke with the head of  U.S. CDC and burst into tears. On the 3rd of January, the head of U.S. CDC informed the Department of Health and Human Services, whose head Alex Azar refused to tell Trump about the situation for two weeks.

On the 28th of January it was said that Americans would find that the virus should not have an impact on their day-to-day life. On the 30th of January the World Health Organization declared a public emergency. That day, that very day, Trump said “We think we have it well under control.” The government didn’t clear labs to conduct testing until the 29th of February, an entire month later.

This has had catastrophic impacts on the abilities of local governments to do contact tracing and to manage the spread of this very dangerous disease. Right through January, February and March, Trump minimized the threat. His twitter feed provides all the necessary evidence. On the 9th of March, Trump likened the virus to the common flu. Think about that.

He wrote callously, two days later, to declare a global pandemic. On the 13th of March, Trump declared a national emergency. This was six weeks after the World Health Organization had declared its own public emergency.

Why do I always say that Mumia is the freest man in the United States of America? Because he saw the Kool Aid and yet refused to drink.

Happy birthday, comrade Mumia. Age 66. Today, having spent 39 years of all your years in prison, red salute to you.