Protesters, led by currently and formerly incarcerated women, trans and non gender-binary people, held a rally on May 15 in a city park next to Riverside Correctional Facility to demand the release of people held in Philadelphia jails and an end to unjust cash bail. The action featured speeches by women recently released from RCF, as well as people still incarcerated who joined by phone. Everyone respected social distancing and mask requirements due to the coronavirus pandemic. 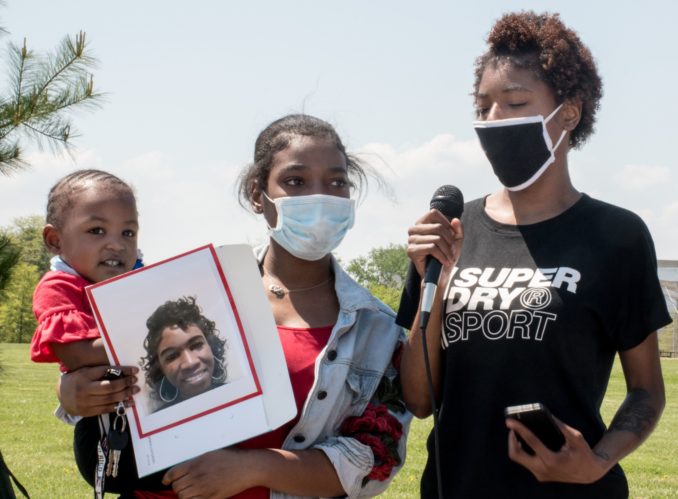 Sisters at the May 15 protest hold the child of one and the photograph of their mother, the child’s grandmother, now imprisoned in Philadelphia. WW Photo: Joe Piette

Organizers on both sides of the prison walls planned the action. It was broadcast via radio so incarcerated people could listen to the speakers. Huge signs with slogans reading, “Free Our People!” and “Free Black Mamas!” were held up for people at RCF to see. In turn, they made noise and banged on cell doors to join the protest and demand their release.

Most people held in RCF have not been convicted of any crime, but are held there because they cannot afford bail, or because a judge refused to allow bail. In Philadelphia, which is the poorest large city in the U.S., the vast majority of incarcerated people are detained because it is impossible for them to raise even a few hundred dollars for bail.

Latonya Meyers, organizer of the Philadelphia Community Bail Fund, said: “We are demanding that District Attorney Krasner, the First Judicial District Judges and Mayor Jim Kenney take immediate action to free all our people from the Philly jails. It is completely unacceptable that in the midst of a global pandemic we are putting people’s lives at risk unless they can afford to purchase their freedom. All our mamas and families behind bars need to come home now.”

Jae Garcia, an organizer of the action, who is currently incarcerated at RCF, spoke by phone: “We should not be sentenced to death by incarceration in a pandemic. None of us want to be the next statistic reported dead at RCF. We need the mayor, district attorney and judges to open their eyes and realize that all our lives are at stake here. There are thousands of people here that need to go home to their families and children. We should not be locked up with the key thrown out, especially when most of us are pretrial and innocent until proven guilty.”

Organizer Luz Acevedo stated: “I don’t think we should die in jail like animals die in cages. There’s nothing we can do in there; we are locked in. Our rights are taken totally away. When this epidemic hits RCF, a lot of us are going to be dead. And I don’t know what the government is planning to do. We need a voice!” Acevedo was recently bailed out by the Philadelphia Community Bail Fund.

After hearing from speakers both inside and outside the jail, participants marched to the prison’s chain-link fence where they held up signs and banners, anticipating that they would be seen by thousands of incarcerated people.

The demonstration was organized by the Philadelphia Community Bail Fund, the People’s Paper Co-Op, Decarcerate PA, the Dignity Act Now Collective, Youth Art and Self Empowerment Project, and many organizers currently incarcerated at Riverside Correctional Facility.