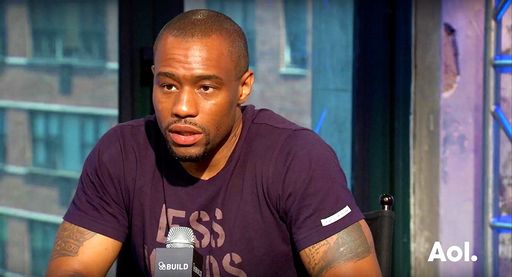 It’s such an honor to be here tonight, surrounded by so many brilliant thinkers and courageous activists, freedom fighters who have been long distance runners, and political prisoners who have made the ultimate sacrifice, giving their all, their very bodies to the struggle.

Tonight what brings us together is the 66th birthday of our dear brother Mumia Abu-Jamal, one of the great freedom fighters, one of the greatest truth-tellers that we’ve ever seen — and a political prisoner.

Since 1981 we’ve been battling and fighting and struggling to liberate Mumia. Mumia is such a passionate voice, such a courageous voice, we need him so desperately on the other side of the dungeon. And we’re gonna continue to fight until he’s out.

If anybody knows Mumia, they know that he wouldn’t want us here talking about him. Mumia would want us to talk about his case, but he’d also want us to put his case in the context of everybody else’s.

Mumia is being held under the most absurd, violent and ugly circumstances that we’ve seen. Just last week, people received a phone call saying that he had been taken to the hospital with COVID-19, making us think that he’d been given a death sentence. That’s the type of cruelty and the type of evil the prison industry, and the prison specifically targeting Mumia Abu-Jamal, demonstrates every single day.

It’s not just about Mumia, because right now we are in a human rights crisis, a crisis of carcerality, a crisis of mass incarceration. The U.S. Empire feeds off of mass incarceration. Ever since the slave enterprise, when African people were brought here and enslaved, the U.S. has made its money, it has built an empire, it has expanded its economy off of human captivity.

Even as we moved into a postslavery moment, all we did was shift the means of captivity. Now, instead of putting people on plantations, we have people in a cage, in what we call “correctional” facilities, jails and prisons, juvenile facilities and such.

We call for the release of all political prisoners right now because it is the right thing to do. But we also make a bolder call, a more radical call, and that is the abolition of prison itself.

Moving outside the ‘logic’ of prison

To live in a U.S. prison right now is to live with a death sentence. Whether you’re there for three months or six months, whether you’ve gotten a life sentence, you are on death row right now if you’re in a U.S. prison. The type of social distancing that the best medical experts — not the president, but the best medical experts — suggest can’t be exercised in prison. The type of protection that you want to be able to engage in, you can’t in prison.

So anybody who’s incarcerated right now doesn’t even have the means to defend themselves. What they’re getting is cruel and unusual punishment. In areas of the world right now, infection rates were 1 and 2 out of 1,000. Then you go into Rikers Island in New York City, and you got 54 out of 1,000.