Reports surfaced in April of cases of discrimination against African workers in the southern Chinese province of Guangdong as pictures appeared on the internet of a sign refusing service to Africans at a McDonald’s restaurant and allegations that Africans were being evicted from hotels. 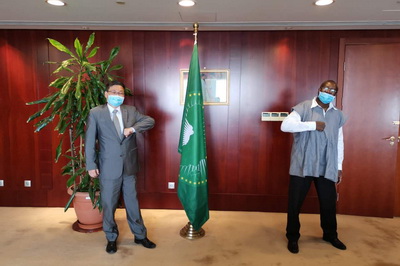 Poor communication from local authorities and sensationalized media reports had led to much confusion on the ground after authorities announced that all foreign visitors arriving in the country would need to undergo a 14-day quarantine period. Western media, eager to cast China in a negative light and create animosity between China and other countries, seized on the reports.

The Guardian, an ostensibly progressive British media outlet, ran a headline on April 27: “China fails to stop racism against Africans over Covid-19.” In the Western media’s account, no distinction is made between the discriminatory actions of a few local officials and businesses and China as a whole. The entire country, including the government, is painted as racist.

Not so for countries like Australia, for example, where Aboriginal people make up just 2 percent of the general population, yet 28 percent of the adult prison population. Or the U.S., where Black, Brown and Indigenous people are brutalized and murdered by police at much higher rates than whites, where the incarceration rate of Black men remains higher than any other demographic, and where Black, Brown and Indigenous families have substantially less income than white families, the result of years of generational poverty and racism.

While the COVID-19 pandemic has seen plummeting crime rates in the U.S., the number of police shootings remains stubbornly unchanged. Fascist, white supremacist groups and individuals operate in the U.S. with impunity, working in prisons, police departments, and local, state and federal government agencies.

Stephen Miller, a top White House advisor, and Steve Bannon, a former advisor to President Trump, have both expressed white nationalist views on repeated occasions. Miller, reportedly the main proponent and architect of Trump’s racist immigration policies, has sought to convince the president to suspend all immigration and close the Southern border.

Where are the headlines exposing the entrenched racism at all levels of the U.S. government?

But it’s different when big business media report on China, even though far-right individuals would never make it into positions of power there and neofascist movements would face swift and thorough repercussions from the state.

China’s government apologized for the cases of discrimination reported in Guangdong. China’s Ambassador to the African Union Liu Yuxi met with Deputy Chairperson of the African Union Commission Kwesi Quartey. A post published on the African Union’s Facebook page on April 15 stated that Ambassador Yuxi “registered the regret and embarrassment that the incidents have caused China” and “recounted the steps the Government of China has taken, and continues to take, to restore calm and to protect the safety, security and dignity of the African population in China.”

Ambassador Yuxi informed Deputy Chairperson Quartey that a Chinese national whose social media post caused the incident had been arrested. Local law enforcement was reprimanded for their handling of the situation, and the Chinese government is paying for two hotels to house those Africans affected. All personal belongings, including passports, have been returned to their rightful owners.

Ambassador Yuxi “expressed overall regret for what had happened and intimated China’s determination to use this as a lesson to improve relations for their African brothers.”

Ambassador Yuxi wrote in China Today: “China and Africa need to strengthen unity more than ever, and further safeguard the overall situation of friendship and cooperation more than ever.” He added, “I believe that the China-Africa relations, which have been carefully nurtured by the leaders of Africa and China for several generations, and the brotherhood based on solidarity and mutual help, can stand the test of time.”

It is also telling that the offensive sign appeared at a McDonald’s restaurant, a U.S.-owned chain. It had to release an apology and was temporarily closed, with employees receiving training on how to avoid such discriminatory incidents in the future.

China’s Ministry of Foreign Affairs spokesperson Zhao Lijian said in a statement: “We reject differential treatment, and we have zero tolerance for discrimination.”

When the U.S. Department of State said the incidents were “a sad reminder of how hollow” China’s relationship with Africa was, Zhao countered at a briefing in Beijing: “The U.S. is immoral and irresponsible to sensationalize the situation and it won’t succeed in sabotaging China-Africa relations.” (Jakarta Post, April 14)

“Guangzhou is an open-minded metropolis,” said Mayor Wen Guohui. “It’s our consistent principle to have zero tolerance for discriminatory comments and behavior.” (Guangzhou, where the racist discrimination occurred, is the capital of Guangdong province.)

Chinese Ambassador to Nigeria Zhou Pingjian met with Nigerian Foreign Minister Geoffrey Onyeama in Nigeria to discuss the incidents. Onyeama noted that Nigerian officials in China had sent him a video showing that Nigerians quarantined in China had all received a gift package from the local authorities as a sign of China-Nigeria friendship. He added that the Chinese government is actively responding to Africa’s legitimate concerns and demands, and relevant issues have been significantly improved.

Zhou “stressed that China-Nigeria relations were unbreakable, noting that the Guangzhou government is fighting against the epidemic, and not Nigerians, Africans, or any foreigners.” (Global Times, April 15)

Guangdong province has since released a package of rules to combat discrimination against foreigners in restaurants, hotels, transportation, markets, hospitals, educational institutions and housing rentals. The measures require all service providers to strictly enforce nondiscrimination measures and resolutely oppose any racist or discriminatory speech or behavior.

Compiled by seven different provincial departments, including Education, Housing and Urban-Rural Development, Transportation, and Culture and Tourism, the measures also include a 24-hour multilingual hotline that foreign residents can call to report cases of discrimination and receive consultation if they encounter any issues.

Despite what Western media reports may say, the Chinese government has worked hand-in-hand with its African counterparts to reach satisfactory resolutions to the problems endured by Africans in Guangdong. The swift and broad measures they have taken stand in sharp contrast to the situation in the U.S., which has recorded many widespread recent incidents of discrimination, racism and violence against Asians.

Members of the Trump administration have avoided taking action against the epidemic of racism here, giving only short, perfunctory statements against discrimination. Nor have they met with officials from China or other Asian nations to address the widespread racism facing people of Asian descent in the U.S.; nor have they released a comprehensive set of rules to combat anti-Asian racism.

In fact, just the opposite is true. Trump himself has repeatedly referred to COVID-19 as the “Wuhan virus” or the “China virus.” China has long been a scapegoat for U.S. failing to handle the pandemic with speed,  adequate medical supplies, and overall scientific direction. Indeed the frenzy of anti-China reporting in the corporate media resembles the worst days of the Cold War.