May 9 — It was no coincidence or geographical convenience that prisoners’ rights advocates organized a car caravan today to San Quentin State Prison in Marin County, Calif. San Quentin, a mere 11 miles from San Francisco, is the state prison where death row prisoners are incarcerated. It is also where Black revolutionary George Jackson and others led a rebellion against racist, inhumane prison conditions, and where Jackson was assassinated by guards in August 1971 for organizing against the prison-industrial complex. 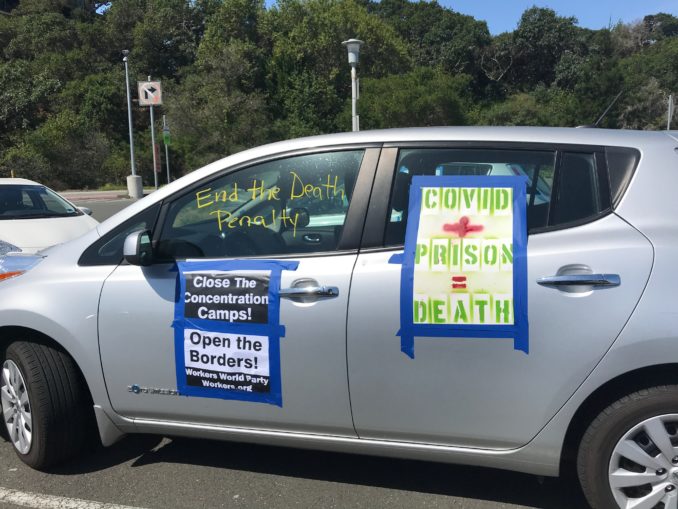 Fast forward to May 4, in the midst of the COVID-19 pandemic raging throughout the U.S. prison and jail system, when the California State Supreme Court ruled against dismissing larger numbers of prisoners from behind bars. The lawsuit, brought by the National Association of Criminal Defense Lawyers, had demanded immediate statewide action to protect those incarcerated in prisons and county jails.

The Labor Action Committee to Free Mumia Abu-Jamal, part of the international effort to free Abu-Jamal, the U.S. political prisoner incarcerated for 39 years in Pennsylvania, called for the car caravan and rally to demand “No State Execution by COVID-19.” (Background on Abu-Jamal’s case.)

In a statement, the committee called upon California Gov. Gavin Newsom to “release elderly, sick or immune-compromised prisoners and all those who are close to parole.” According to the Marshall Project, a nonprofit journalism group covering criminal justice issues, on May 6 there were over 20,000 reported cases of COVID-19 infection in U.S. federal and state prisons, with 304 reported deaths.

The committee also demanded legal action to free San Quentin prisoner Kevin Cooper, who is on death row and whose legal battle for a new trial is being stalled by the courts. The committee called upon the governor to demonstrate real opposition to the death penalty by supporting Cooper’s right to a new trial.

Responding to the COVID-19 human rights emergency and to the ongoing racist catastrophe of the prison-industrial complex, more than 80 cars met at the Larkspur Ferry parking lot on May 9 to decorate the cars and attend a short precaravan rally. The rally was broadcast on a local radio frequency so people could listen in their cars.

The caravan snaked along the roads and highway surrounding San Quentin Prison to the West Gate, where a small in-person rally was held on a flatbed truck. Speakers included Angela Davis, Minister King-X of California Prison Focus, Jack Heyman of the Labor Committee (retired leader of International Longshore and Warehouse Union [ILWU] Local 10),  and Cephus Johnson, the uncle of Oscar Grant III, killed by Bay Area Rapid Transit police on Jan. 1, 2009. A statement from San Quentin death row by Kevin Cooper was read.