Immigration and Customs Enforcement, the agency charged with deporting people from the United States, scheduled five deportations to Haiti on May 11 from the Pine Prairie Detention Center in Louisiana. The agency claims the five individuals have either tested positive for COVID-19 or show signs of having the disease. (Miami Herald, May 8) 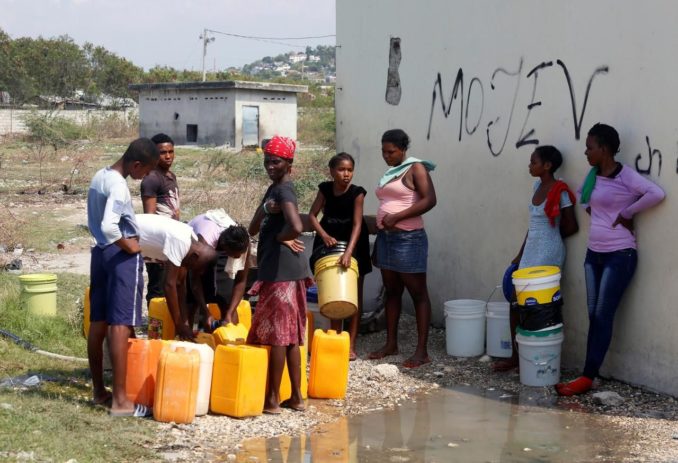 Haitians forced to get water from a spigot for sanitation.

Ironically, the U.S. State Department issued an official advisory March 31 to “avoid all international travel due to the global impact of COVID-19.” President Trump boasts that he has done a great deal to protect the “American people” by restricting travel to this country from China and Europe.

While other Caribbean countries have been the targets of COVID-19-positive deportations, Haiti is particularly vulnerable. According to Haiti’s National Institute of Statistics, the country has only 911 doctors for 11 million people.

The World Health Organization reports Haiti has over 900 health institutions. More than half are in the capital, Port-au-Prince, which is home to about one-third of the nation’s people.

Public health officials in Haiti feel they have to quarantine, at major expense, anybody entering the country, especially if they have been exposed to COVID-19. There are only two small laboratories in Haiti that can test for this disease.

As of May 10, Haiti’s Ministry of Public Health announced there were 151 cases of COVID-19 and 12 deaths in the country.

Almost 6 million people in Haiti live on less than the poverty line of $2.41 a day — a day! — according to the World Bank. Inflation is running about 20 percent. While the figures haven’t been tabulated yet, remittances from Haitians working abroad — which contribute about 30 percent of Haiti’s gross domestic product — are certain to be falling sharply.

Many Haitians living in North America and Western Europe worked at jobs that have been wiped out in the COVID-19-induced economic crisis. About one-third of all food consumed in Haiti is imported, so a jump in inflation, plus the loss of remittances, is expected to push “food insecurity” into hunger — and the beginnings of famine.

Much of Haiti’s economic devastation can be traced to the actions of France and the United States to make Haiti pay, time and time again, for the people’s “original sin” — destroying their slave masters’ root and branch and expelling them from the country. In a just world, Haiti would be entitled to reparations.

Beyond its economic underdevelopment, Haiti has suffered from a number of other disasters. An earthquake in 2010 killed tens of thousands; the structural destruction it wrought has still not been overcome. A cholera epidemic in 2010 brought by United Nations “peacekeepers” lasted for nine years, killed 10,000 people and sickened hundreds of thousands. Hurricanes Mathew, Irma and Maria also did major damage.

Politically, big protests in 2018 over huge increases in the cost of fuel and transportation severely disrupted the economy. Billions of dollars of aid from a program called PetroCaribe, funded by Venezuela and supplying oil at cut-rate prices, evaporated into the pockets of politicians. In 2019, hundreds of thousands of people came out to demand that President Jovenel Moïse resign because he had mismanaged the economy and was corrupt.

Protests in 2020 have not been as large or as militant as those in 2018-19, but there’s awareness that Haiti has the right not to receive people the U.S. deports. The foreign minister last month politely asked the U.S. to refrain from deportations in this time of plague. The Family Action Network Movement sent a letter to President Jovenel Moïse April 22 requesting he stop accepting these deportations in order to restrict the spread of COVID-19 in Haiti.

Would he stop accepting them if Trump started wearing a mask?